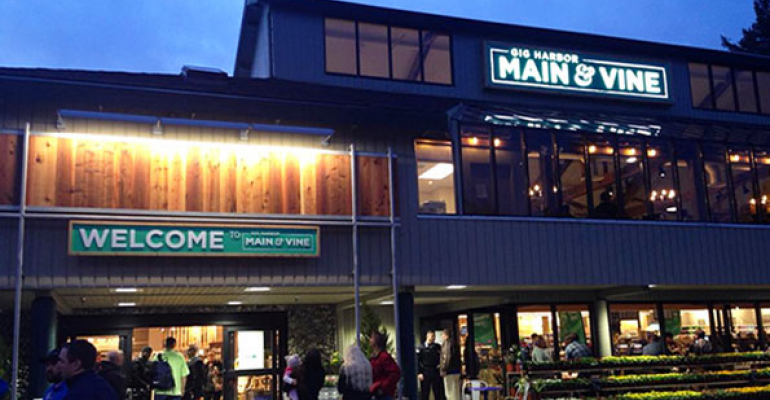 Kroger opened its new fresh concept “Main & Vine” store Wednesday to a large crowd at the site of a former QFC supermarket in Gig Harbor, Wash.

I'm at #MainAndVine's opening in Gig Harbor taking pictures. You'd think it was Black Friday with the crowd here! #somanypeople

As reported in SN, the 27,000-square-foot space featuring artisan foods and culinary specialties has been touted by Kroger as "where eating is healthy, affordable and fun."

Main & Vine highlights a large selection of produce and 300 bulk items along with an Event Center in the middle of the store, rather than along its perimeter. The Event Center will feature cooking demos, food and beverage tastings, and new recipes and ingredients as part of a "What's for Dinner Tonight" program.

“From the beginning the focus of Main & Vine has always been centered on the community and fresh, local and sustainable foods, as well as mainstream grocery items available at affordable prices,” said Dann Kohl, Main & Vine’s store manager, in a statement. “Residents now have a space to explore local brands and purveyors, get inspired for their next meal, learn something new at the Event Center or meet up with friends and family in our café area.”

The store also features a brew and blend cafe area, "Surprise & Delight" items ranging from local to artisan cheeses and imported wine, fresh prepared items like pizza, salads and sandwiches, and a Nourishing Living Center from which health and beauty items that aren't available in-store can be ordered and shipped to one's home via the store's online counterpart mainandvineshop.com, Kohl told The News Tribune.