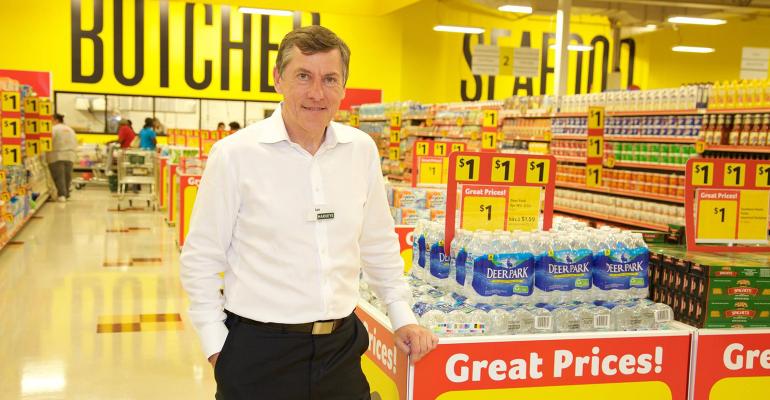 <p>CEO Ian McLeod says he was encouraged by previous refits, such as the one he attended in Charlotte.</p>
News>Store Design & Construction

Residents in select communities in Florida, Georgia and the Carolinas are awakening Wednesday to find a new look and format has overtaken their local supermarket.

In a massive recreation of the overnight banner transitions executed at select stores earlier this year, Southeastern Grocers on Tuesday closed and repositioned 73 stores which are reopening Wednedsay under the Harveys banner, which has been revamped to better serve lower income shoppers with more relevant selections and value prices. The change occurred at all 55 existing Harveys units in Georgia, as well as in 10 stores that until Tuesday operated as Bi-Lo in North Carolina, South Carolina and Georgia, and at six Florida stores previously doing business as Winn-Dixie.

In an interview with SN Tuesday, Southeastern CEO Ian McLeod said the changes were encouraged by sales, traffic and basket size improvements at both a Winn-Dixie store in Jacksonville, Fla., that was flipped to the new Harveys format in May and a Bi-Lo store in Charlotte, N.C., that underwent a similar transition in August. All of the changes, he said, were necessary to address the needs of their shoppers, who are challenged economically and reeling in some cases by reductions in federal food stamp benefit programs.

“In order to compete effectively in the Southeast we have to be able to deliver a format that is relevant for the shopper in each community you serve, as opposed to a homogenous approach we may have offered previously,” said McLeod, who took over as Southeastern’s CEO in early 2015 and has since introduced a revamped, service-focused format at some Winn-Dixie stores as well as a Harveys-like format known as Fresco y Mas at a Miami Winn-Dixie primarily serving Hispanic shoppers. “Since we already had the Harveys brand in Georgia, it’s given us an opportunity to convert other stores where its format would be appropriate, while rolling the format changes back into our 55 stores in Georgia, giving those customers a new look and feel for their stores," McLeod explained. Rolling the distinct format to select Bi-Lo and Winn-Dixie locations will help those stores better serve shoppers without interfering with the brand identity inherent in its other locations, he added.

Preparation for the changes has been underway for several weeks and includes the previously reported transition of Harveys stores from its former loyalty rewards program to the Plenti Rewards coalition, which among other things, allows shoppers to use loyalty points for discounts on groceries at Harveys stores and not just for gasoline discounts.

Changes in the stores include an arresting new décor in bright yellow, black and red and an emphasis on values for customers on a budget including lower prices on more than 800 items on “Low and Staying Low” extended discounts; and 2,200 items with lower everyday retail prices marked as “Great Low Price.” In a release Southeastern highlighted price reductions of between 15% and 25% on items like ice cream, vegetable oil, flour and bottled water. In addition, the store introduces a “$1 Zone” with more than 600 items marked at $1, McLeod said.

Service departments have been revamped with more relevant selections and cuts in meat, and a variety of volume driving offerings, including “value packs” offering large quantities at lower per-pound prices, and a “Pick 5” program offering a selection of more than 60 fresh and frozen meats priced at $19.95.

The stores have also refreshed beauty departments with an eye on saving shoppers a trip to the salon or barber.

The six Winn-Dixie stores receiving the new banner and format are all in the Jacksonville area, where Southeastern debuted the new Harveys format this spring. Bi-Lo stores seeing the new format are located in Charlotte, N.C. (two stores in addition to the previously converted one); Columbia (three stores), Conway, Newberry and Greenwood, S.C.; and in Augusta, Ga. McLeod said Southeastern made several "tweaks" to the initial formats introduced in Jacksonville and Charlotte, but was "very pleased" with the results of the changes overall.