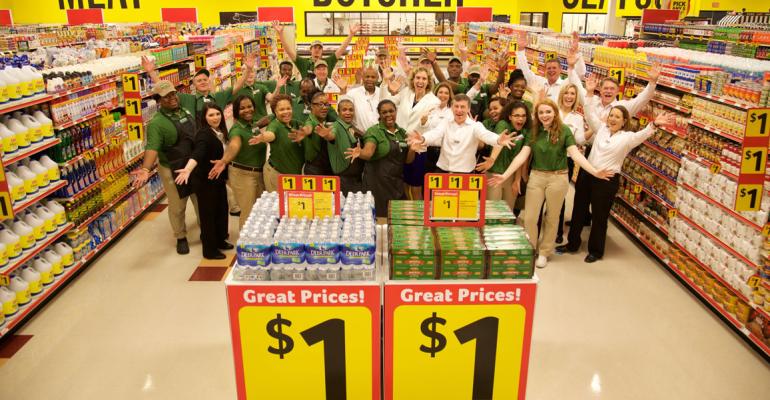 McLeod over the past six months has led an effort to renovate Southeastern's stores with an eye on aligning their brands and selections to specific demographic markets, often with dramatic flourishes. In February, the company reopened a dark Winn-Dixie in an affluent Jacksonville, Fla. neighborhood revealing an offering focused on prepared foods, specialty items and freshness.

In May, a Winn-Dixie across town abruptly adopted a discount format and banner imported from its Harveys chain, focused on African American shoppers in its neighborhood. Last month, a Winn-Dixie in a Hialeah, Fla. introduced a new banner, Fresco y Mas, focused on the area's Hispanic shoppers.

On Wednesday, Southeastern applied its first format change to its Bi-Lo brand, converting a conventional Bi-Lo in Charlotte, N.C. to a Harveys. As in the previous switches, the change came overnight, with point of sale, layout, signage and pricing systems enacted. (Color scheme changes — in this case, a striking bright yellow — were quietly in the works over the previous weeks, McLeod acknowledged).

McLeod said the changes in Charlotte were encouraged by early results of the first Harveys conversion in Jacksonville, although he still referred to the change as a trial. He declined to quantify specific sales or profit changes as a result of its conversion.

"Certainly [the change in Jacksonville] improved the performance of the store. And while you can't make broad projections on a store you've run for a limited number of weeks it gave us enough confidence to broaden the trial to a Bi-Lo," McLeod said. "Based on the demographics of the store, and given the success of the first one, we thought a similar format might work here."

McLeod said the changes result in a store with a more relevant selection for shoppers than a conventional Bi-Lo, while also recognizing the particular economic challenges faced by its shoppers.

"Looking at the demographic makeup of the area, it's got an above average level of African Americans, and it also has an above average level of customers who have to manage their budgets very tightly, therefore they're looking for the very best value that can be provided, and they have choices," he said. "The Carolinas are a very competitive market, and I could probably list six or seven competitors in this market area. What we've done is looked at the customer base around the store and analyzed the market to see how we might be able to improve offer and make it more relevant to them and also give them better value."

Significant changes from the conventional Bi-Lo format include the addition of a $1 Zone designed to head off competition from area dollar stores and a revamping of the meat department offering larger packages and a "Pick 5" case priced at $19.95. The health and beauty section has been updated with more relevant products in areas like hair care. The extended discount program known as "Down Down" at Bi-Lo has been expanded to an additional 350 items and rechristened as "Low and Staying Low."

"Wherever we saw an opportunity to make the range more relevant, we have," McLeod said. "We thought we'd see if we could provide a better cross-section of products for that customer and give them a better value on them than they could get elsewhere."

McLeod acknowledges the industry — including Southeastern's Winn-Dixie brand — has had a checkered history with a multi-format approach. Winn-Dixie at one time converted dozens of stores to a low-cost SaveRite discount brand, although most of them closed around the company's 2005 bankruptcy and the remainder flipped back to the parent brand.

"It is a little more complex running multiple formats," he said, "but it's really a matter of looking at each store on its own merits, and identifying those within the banners which will benefit from a different approach."