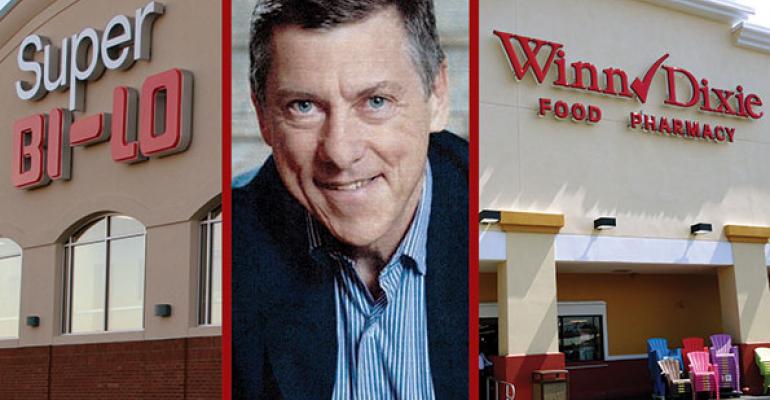 Analysis: High profile CEO could flip the script for Bi-Lo

While a called-off IPO and a wave of executive departures made Bi-Lo Holdings a topic of widespread takeover speculation, the retailer itself had a different plan entirely, making a surprise high-profile CEO appointment officials said would unlock the potential of the struggling parent of Bi-Lo and Winn-Dixie stores.

Ian McLeod, an international retailer with turnaround experience on two continents, will take over as president and CEO of the group March 2, succeeding Randall Onstead. McLeod comes to the Jacksonville, Fla., retailer from the Australian holding company Wesfarmers Group, whose Coles grocery chain saw a major turnaround under McLeod’s leadership. McLeod is also a former chief executive of British retailer Halford Group and has 20 years of experience at British grocer Asda, now a part of Wal-Mart Stores. He is also a one-time board member of Wal-Mart Germany, a former CEO of renowned European soccer club Celtic; and a director of pro soccer clubs in England and Australia.

“McLeod is widely respected, both in the UK and Australia, and has been linked with virtually every high profile grocery vacancy in the UK, most recently the position of CEO of Morrisons,” Bryan Roberts, a London-based analyst at Kantar Retail, told SN. “He is remembered fondly at Asda and is credited with turning around the Coles business in Australia in the face of strong competition from Woolworths and disruption from both Aldi and Costco.”

At Winn-Dixie, he inherits a company that according to sources has struggled recently but is not necessarily requiring a “turnaround.”

One source told SN that while revenues have increased as a result of acquired stores, same-store sales are down slightly, and earnings down significantly as a result of operational challenges, including supply and shrink issues in the wake of Winn-Dixie’s transition to outsourced distribution, which began in November of 2013.

“A turnaround situation is characterized by same-store sales cratering and customers abandoning you — that’s not the case with Bi-Lo,” a bond investor, who asked not to be identified, told SN. “What they have are operational challenges related to wholesale issues, some big mistakes with promotions, and bloated operating expenses, but they can be fixed.”

Other sources told SN that Bi-Lo appears to have been no more successful operating acquired Sweetbay stores against a dominant Florida rival Publix than Delhaize had been. “Where Winn-Dixie has struggled is where Sweetbay struggled — in taking those stores up to a level with Publix,” said Mark Heckman, a Florida-based consultant, told SN.

Some combination of these struggles discouraged Bi-Lo Holdings from proceeding with a plans for an initial public offering, which it called off over the summer and led to the departures of Onstead as well as EVP Mark Prestidge, who left in December, sources said.

Brian Wright, a spokesman for Bi-Lo Holdings, declined to comment on the company’s performance specifically but said McLeod could help the company better realize its potential.

“Our business today is at an inflection point,” Wright told SN. “Growth will be driven by leveraging our existing, significant asset base to drive enhanced revenue and profitability. Ian recognizes the great opportunity we have to unlock our potential and build upon a business which is now over 800 stores strong.”

McLeod’s success at Coles — he increased sales from $23.2 billion (U.S.) to $35.2 billion, and doubled profits over six years, Bi-Lo officials said — stemmed from a firm grasp on cost of goods and internal efficiencies, Roberts said.

“His reputation is one of being firm but fair,” he said. “He leans towards robust negotiations with suppliers and is intolerant of any internal inefficiency. In his time at Coles, the business become more innovative with respect to technology, so we await with interest to see how he leads innovation and strengthens the value proposition of Bi-Lo.”

Sources said they believed hiring of McLeod would at least temporarily shut down industry speculation flaring over recent weeks that Bi-Lo would be sold to Kroger. While acknowledging such a scenario was “preposterous” given Kroger’s oft-stated aversion to making acquisitions of companies in need of heavy investment, a combination would make sense for Kroger at the right price, Karen Short, an analyst for BMO Capital, said in a recent research note.

However, the addition of a high-profile new leader would indicate Bi-Lo’s owners believe that when and if they sell, they're looking to sell high.