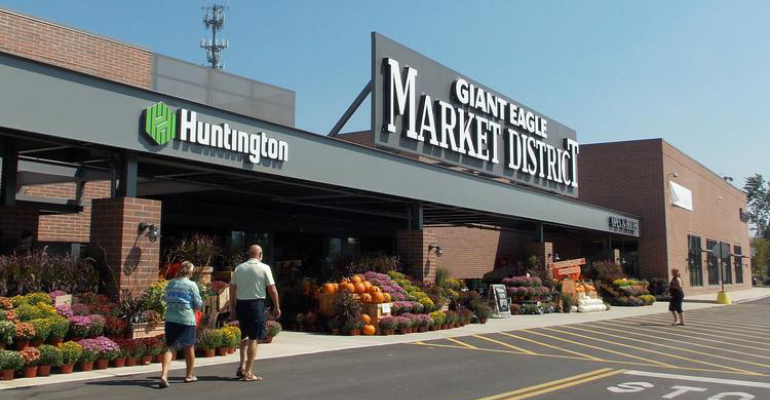 Giant Eagle
Giant Eagle's elimination of the plastic bags marks the beginning of a larger effort to transition from single-use plastics, also including straws, single-serve fresh food containers and bottled beverages, among other items.
Issues & Trends>Sustainability

Giant Eagle to phase out single-use plastics by 2025

Giant Eagle aims to eliminate single-use plastics companywide, including all stores and operations, by 2025 under a new sustainability platform.

Plans call for Giant Eagle to begin the program next month by phasing out single-use plastic bags at 25 stores in three markets: Pittsburgh, Ohio’s Cuyahoga County and the Columbus suburb of Bexley, Ohio.  Those pilots — including Giant Eagle, Market District and Market District Express locations — will pave the way for a broader effort to transition from single-use plastics, including bags, straws, single-serve fresh food containers and bottled beverages, among other items.

Related: Sobeys to eliminate plastic grocery bags at all stores

In announcing its sustainability strategy yesterday, Giant Eagle said the Pittsburgh pilot at its Waterworks Market District supermarket is being conducted in partnership with Allegheny County, the city of Pittsburgh and environmental group Sustainable Pittsburgh. The store will remove single-use plastic bags at its registers for six months starting on Jan. 15.

To encourage customers to switch to reusable bags, Giant Eagle also is now offering a limited-time “one perk per reusable bag used” rewards promotion at all of its supermarkets. Reusable bags are available for purchase at the stores for 99 cents each.

Along with plastics, Giant Eagle plans to set targets for reducing waste and carbon emissions as well as offering more sustainable products and driving employee engagement in sustainable practices. The company said it will announce specific goals for these efforts in the coming months. 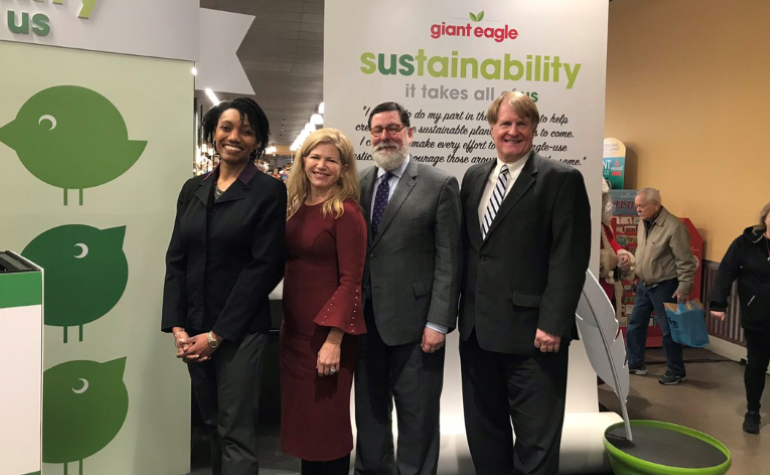 "When my great-grandfather and the four other founders started Giant Eagle nearly 90 years ago, they wanted to improve life for people in their communities,” Giant Eagle President and CEO Laura Shapira Karet said in a statement. “Protecting our planet for future generations is a critical way we uphold this commitment today.”

Giant Eagle said the pilot in Pittsburgh comes after Pennsylvania earlier this year enacted a one-year moratorium on plastic bag bans in order to assess their environmental and economic impact.

“Consumers have power, and this move invites every shopper to have a positive impact,” according to Joylette Portlock, executive director of Sustainable Pittsburgh. “Giant Eagle is demonstrating leadership in identifying solutions for how to reduce plastic waste here in the Pittsburgh region and is considering the right factors during this pilot. We also applaud and support the company’s larger sustainability commitment to our community.”

In the coming months, Giant Eagle also plans to phase out its blue-colored, single-use plastic bags in all city of Pittsburgh stores. The retailer said many residents have long used the blue bags to collect recyclables at the curb, but the blue bags present mechanical issues for the machinery that sorts the recycled materials. The elimination of the single-use blue plastic bags coincides with the city’s rollout of free recycling bins to households, the grocer added.

“I commend Giant Eagle on their bold pledge to eliminate single use plastic by 2025, a major advancement towards tackling our challenges with litter and recycling quality in Pittsburgh,” commented Pittsburgh Mayor Bill Peduto.

Giant Eagle added that the Waterworks Market District pilot is endorsed by Allegheny CleanWays, and the retailer has engaged the Wilton E. Scott Institute for Energy Innovation at Carnegie Mellon University to share data and conduct research to understand the pilot’s community and environmental impact.

“We are grateful to Laura and her team at Giant Eagle for this commitment to eliminate single use plastic by 2025,” Allegheny County Executive Rich Fitzgerald stated. “We thank the company for its leadership and are thrilled to see so many taking active roles in doing their part to reduce our ecological footprint.”

“As other U.S. retailers continue to ignore the plastic pollution crisis, Giant Eagle has shown it understands the urgent need to eliminate single-use plastics from its operations. Giant Eagle has sent a clear message to other retailers that the time for action has come,” Greenpeace USA plastics campaigner David Pinsky said in a statement.  “While additional details are needed, Giant Eagle’s plan to rid its operations of all single-use plastics by 2025 could be game-changing. We hope that the company sticks to this ambitious commitment and works to speed up the elimination of throwaway plastic bags, which cannot be recycled in curbside programs.”