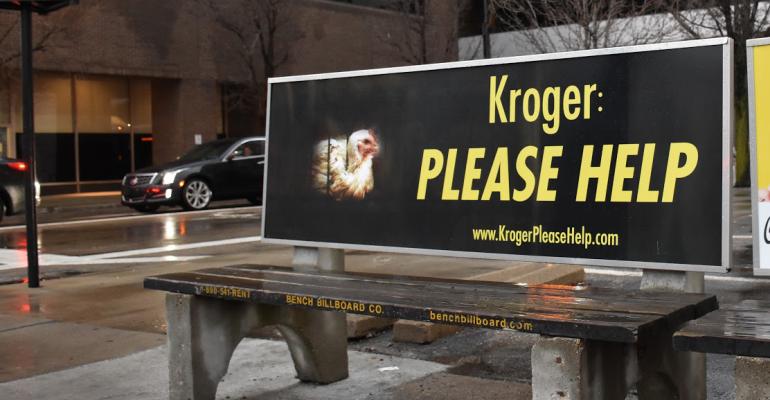 Kroger Co. appeared to bow to consumer pressure on cage-free eggs with the release of a statement late Wednesday pledging to update its sourcing practices.

“As our customer base has been moving to cage-free at an increasing rate, Kroger’s goal is to transition to a 100% cage-free egg supply chain by 2025. The Kroger family of stores is committed to working with our suppliers during this transition in a way that ensures eggs are readily available, safely produced, and affordably priced for all of our customers,” the statement said.

Yesterday, activist group The Humane League launched a new campaign to convince Kroger to change its policies on egg sourcing. In addition to a website and social media efforts, the group also placed ads displaying caged hens on benches in Cincinnati, where the retailer’s headquarters are located.

The ad seen below in this social media post appears to be located only a few blocks from Kroger’s headquarters.

“We applaud Kroger for listening to the concerns of its customers and committing to end its support of cruel cage egg farms,” David Coman-Hidy, executive director of The Humane League, said in a press release. “This will have a huge impact on the future of animal welfare in the U.S.”

In its statement, Kroger said it would “continue to listen to our customers and engage in dialogue with stakeholders on important food policy issues.”