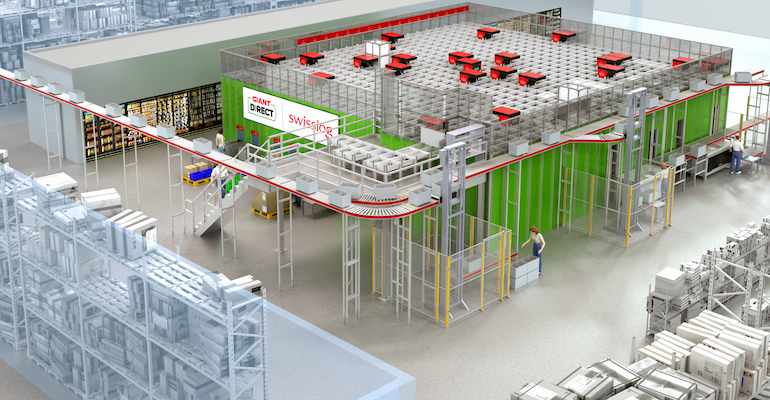 Carlisle, Pa.-based Giant said Tuesday that Swisslog will build out the technology capabilities at the 124,000-square-foot facility. The project includes the installation of AutoStore’s robotic storage and retrieval system and its supporting Swisslog SynQ software and pick stations. Giant also will work with Peapod Digital Labs to streamline order fulfillment.

Renovations are under way, and plans call for the new Giant Direct EFC to open in November. Located at 3501 Island Ave., the facility will be able to process about 15,000 online grocery delivery orders weekly for customers in the Center City and South Philadelphia neighborhoods, according to Giant.

Besides being able to handle more capacity, the new automated facility will provide faster order fulfillment as well as room to meet escalating demand for home grocery delivery service, the company noted. The center also is expected to bring more than 200 new jobs to the Eastwick community. 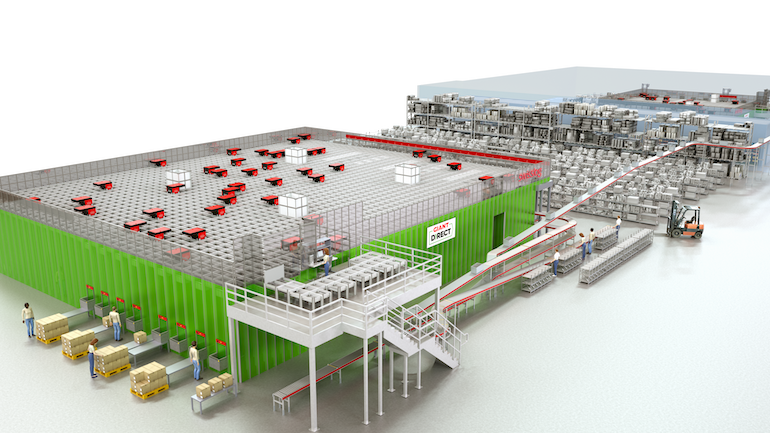 Plans call for the 124,000-square-foot Giant Direct EFC to open in November.

“This pilot is an exciting milestone in The Giant Company’s omnichannel evolution as we work to transform the online grocery experience for our customers,” Nicholas Bertram, president of The Giant Company, said in a statement. “As we continue to see incredible demand for Giant Direct across the Philadelphia region, working with Swisslog to incorporate state-of-the-art technology like AutoStore will not only bolster our overall e-commerce platform for future growth but also significantly increase our operating capacity, allowing us to deliver a faster, best-in-class experience to more customers each week.”

Twenty-year grocery veteran Angel Cordero has been named manager of the Giant Direct EFC. Most recently, he served as store manager at the Giant Heirloom Market in Philadelphia’s University City district.

“Our customers’ shopping patterns have changed, and online grocery shopping has become the new norm,” Cordero commented. “With more and more families choosing Giant Direct, our new fulfillment center will help us serve Philadelphians faster, offering a real point of differentiation in the marketplace, while setting the stage for long-term growth in the city we’re so proud to serve.”

Along with the hive robotic technology from Norway-based AutoStore and Mason, Ohio-based Swisslog, the new EFC will include Peapod Digital Labs’ proprietary manual-picking capabilities. Chicago-based Peapod said its picking system in combination with the Autostore grid storage density and “goods to person” productivity gains will provide a flexible solution for streamlining online grocery order fulfillment. 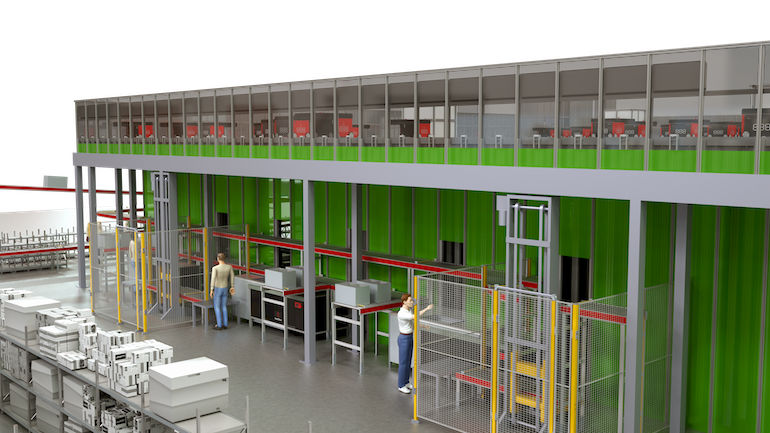 “Over the past year, all Ahold Delhaize USA companies have seen a tremendous increase in online sales growth, and we believe this growth is here to stay,” stated Peapod Digital Labs President JJ Fleeman, who’s also chief e-commerce officer of Ahold Delhaize USA. “As we think about shifting consumer expectations and the future of omnichannel shopping, we must continue to build and evolve our already strong infrastructure to optimize pick-up and delivery. We’re excited to kick off this pilot with The Giant Company and Swisslog as we continue to build out e-commerce fulfillment capabilities, which we believe will be key in supporting continued omnichannel growth.”

Other micro-fulfillment tests also are ongoing at Ahold Delhaize USA companies, including a multi-shuttle pilot with Stop & Shop and Takeoff Technologies in the Hartford, Conn., market. Additional micro-fulfillment pilots will be announced in the coming months.

Giant’s new EFC will add to Ahold Delhaize USA’s expanding supply chain, which as of March 1 will include 18 self-managed traditional distribution centers, 28 EFCs and more than 1,100 click and collect locations. By 2023, the network is slated to grow to more than 27 distribution centers, with additional EFC and click-and-collect growth as part of the overall transformation of the omnichannel supply chain.

Parent company Ahold Delhaize, based in Zaadam, the Netherlands, has said it plans to expand U.S. online capacity by nearly 100% in 2020 and 2021, including doubling the number of pickup locations to about 1,400. The U.S. business reaches about 90% of households in its markets with home delivery and pickup and roughly 70% with same-day delivery, including Instacart.

“As we continue to transform the supply chain for the future, we’re doing so with the lens of creating a truly omnichannel supply chain, there for customers whenever, wherever, however they want to shop,” explained Chris Lewis, executive vice presdient of supply chain for Retail Business Services (RBS), the services arm of Ahold Delhaize USA. “By 2023, Ahold Delhaize USA companies will be serviced by one of the largest supply chains and private fleets on the East Coast. Continuing to explore ways to maximize the total infrastructure is critical as we create an omnichannel supply chain of the future.”

Also as part of its omnichannel game plan, The Giant Company is deploying geofencing technology to bolster the functionality of its Giant Direct app. Customers can enable location services or text functionality when en route to one of more than 150 pickup locations. Store teams receive the early notification and can collect and prepare the customer’s order for their arrival, cutting customer wait times by nearly 50%, Giant said.

The grocer also has introduced grocery lockers to bring click-and-collect functionality to two of its Elizabethtown and Horsham, Pa., stores. The program lets customers retrieve their groceries in a contactless fashion, during an assigned time window, from a temperature-controlled locker outside the store by scanning a QR code or entering a PIN that they receive with their online order.

The Giant Company launched the Giant Direct brand in February 2019 when it debuted its first e-commerce hub in Lancaster, Pa. Customers across 90% of the chain’s footprint have access to online grocery ordering and delivery and pickup service. Last month, Giant launched a subscription program called Choice Pass for Giant Direct customers, providing unlimited free delivery and pickup for $98 per year or $12.95 per month.