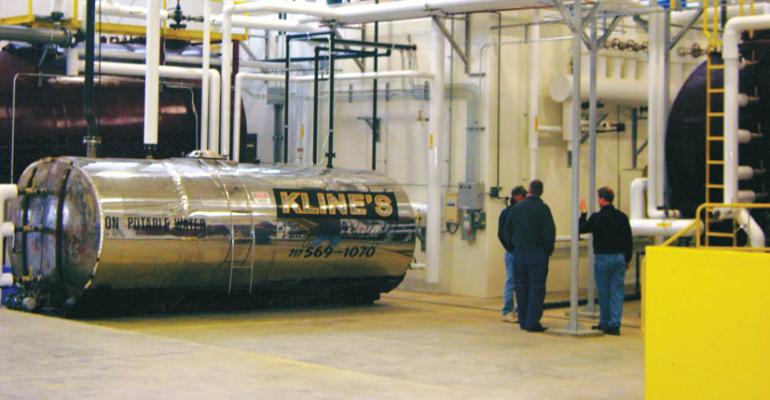 SUNBURY, Pa. — Working with a third-party provider, Weis Markets here recycled 330,000 gallons of cooking grease taken from its 164 stores last year, as part of a grease-trap recycling program that is unusual in the food retailing business.

Kline’s Services, Salunga, Pa., has been collecting the cooking grease, a by-product of Weis stores’ food preparation areas, from all Weis stores since January 2012, and processing it in a “Food2Fuel” production facility. Last year, the process extracted 6,600 gallons of brown oil, a biofuel with the same heating value as No. 2 heating oil; Kline’s uses the biofuel to heat its buildings instead of petroleum-heating products.

Kline’s generates methane from the remaining grease in a methane anaerobic digester and uses it in an engine/generator unit to power its buildings and provide electricity to 450 homes in the surrounding community. Last year the grease yielded about 2 million cubic feet of methane gas.

“We want to manage waste responsibly and reduce our carbon footprint, which this program helps us do,” said Patti Olenick, Weis’ sustainability manager.

Outside the back of some stores Weis employs a 1,000-gallon “whole-house” grease trap that captures grease that went down the drain in food preparation areas, explained David Klacik, manager of building maintenance for Weis; in other stores, a 50-gallon grease trap is used in each food preparation area, including deli, bakery and hot foods. The smaller traps are emptied monthly, the larger ones quarterly. Kline’s takes the grease to its facility, “where the magic happens,” he said, noting that very few companies perform this type of grease recycling.

Prior to the current recycling program, up to 30 third-party companies removed grease from the traps; that waste was processed at a wastewater treatment plant, with the extracted solid sludge sent to landfills. Thus, grease that would have ended up as landfill sludge is being converted to fuel, noted Klacik. Moreover, the fuel is derived from “food, not a fossil fuel like natural gas or coal,” added Olenick.

The myriad companies previously used by Weis provided inconsistent grease-trap service compared to Kline’s more reliable and consistent service, noted Klacik. He added that this service improvement has resulted in fewer back-ups from grease-clogged pipes; such back-ups can cause stores to shut down their service departments for clean-ups, or even damage local waste-treatment plants. The cost for Kline’s program, which Olenick declined to specify, is the same as the combined cost of the previous services.

In a separate program, Weis has begun selling private-label compost created from store-provided food waste at all of its 164 stores. The compost is being produced at American Biosoils & Compost, Skippack, Pa., which is receiving food waste — in the form of leftover produce, bakery, floral and other products — from close to 40 Weis stores, said Olenick.