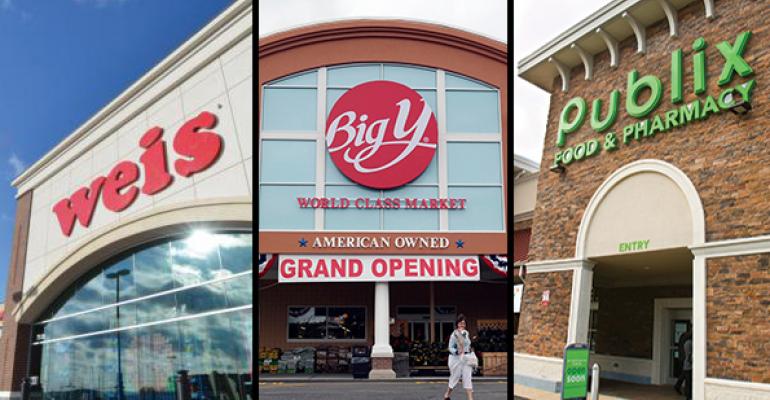 5 takeaways from the Ahold-Delhaize spinoff

As reported by SN, Ahold and Delhaize have made agreements to sell 86 stores to meet antitrust approval in their forthcoming merger, with Publix expected to take some of Ahold's Martin's chain in Richmond, Va., and Weis Markets emerging as a big buyer of Food Lion properties in the Mid-Atlantic states. Here are some takeaways from the spinoff:

1. Union stores stayed put
Local unions representing Ahold-owned stores in Massachusetts and Virginia this spring were concerned about potential job losses if their stores were sold, but as things turned out, most are exactly where they started. Instead, a bunch of non-union Food Lion stores in the Fredericksburg, Va., market went to Weis, while the only sales in Eastern Massachusetts were non-union Hannaford stores, all going to Big Y.

Only Tops Markets (4 Stop & Shops) and Albertsons/Acme (1 Giant store in Salisbury, Md.) acquired union stores; Tops is expected to assume the current collective bargaining agreements at those stores; Acme has agreed to negotiate a new deal.

2. Big move for Weis
Sunbury, Pa.-based Weis Markets, which will snap up 38 Food Lion stores, emerged as the single largest buyer of divested locations. The move will essentially double Weis’ current store count in Maryland and bring the brand to Delaware and Virginia for the first time.

3. Martin’s no more
Ahold had high hopes when it paid $140 million for 25 Ukrop’s stores in 2010 and tucked them into its Giant-Carlisle banner, but it didn’t turn out well in the end. Ironically, many of the stores will go to a company to which Ukrop’s was often compared, Publix Super Markets, which will acquire 10 select units. Publix will take its time to renovate and reopen those stores with an eye on making the best possible first impression in a market with no shortage of top competitors.

Ahold officials said they would continue to try and sell the remaining Martin’s stores. Three of them were previously set for closure this month.

4. Another boost for Supervalu wholesale
As it prepares for a future without the Save-A-Lot retail banner, Supervalu is aggressively rebuilding its core wholesale business. The company acquired 22 Food Lion stores, mainly in the brand’s northern and westernmost reaches with the intention of doling them out to wholesale customers under its Shop 'n’ Save brand.

5. The $29 billion question
Lest we forget, these deals were all made possible by a merger of Europe-based giants Ahold and Delhaize, which should result in a 2,000-store competitor to all seven acquirers.

FTC approval of the deal, announced a year ago, is considered a final hurdle of the deal which officials said would unleash millions in synergies and result in advances to the respective store banners, including Ahold’s proven e-commerce and private label benefiting Delhaize-owned stores, and fresh merchandising and efficiency expertise exported from Delhaize to Ahold.