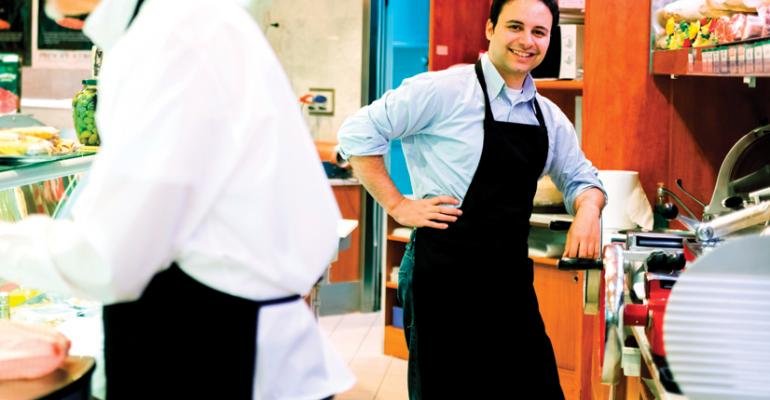 &ldquo;This year I brought someone in whose sole job was icing the cake. That was an easy job for him, and yet such a phenomenal help to us. He allowed the rest of my staff to focus on what they do best &mdash; decorating.&rdquo; &mdash; Nyla Stromberg, cake department manager, Marketplace Food &amp; Drug

Graduation season is a time of celebration for students and families in Minot, N.D., and that means big business for the cake department at Marketplace Food & Drug. There, manager Nyla Stromberg and her team of decorators work long hours turning out the hundreds of cakes customers have ordered to commemorate the occasion.

“The month of May we’re working around the clock,” she said. “It’s insane.”

So insane, in fact, that Stromberg has to hire three or four extra decorators to keep up with the workload. They’re people she knows through supplier channels and who have worked for her in the past. According to Stromberg, they play a key role in not only keeping her department humming along, but in burnishing its reputation in the community as a high-volume, high-quality bakery.

“This year I brought someone in whose sole job was icing the cakes,” said Stromberg. “That was an easy job for him, and yet such a phenomenal help to us. He allowed the rest of my staff to focus on what they do best — decorating.”

Seasonal hiring is a solution more and more companies are turning to during holidays and other busy occasions. Last November, in preparation for the year’s busiest shopping period, U.S. retailers added 465,500 seasonal workers, a 20% increase from the year before and the highest total ever for that month, according to labor firm Challenger, Gray & Christmas. Top hirers for the year included Wal-Mart Stores, which added 50,000 seasonal workers, and Target, which added around 90,000.

Fresh departments like Marketplace’s bakery, as well as floral, meat and produce sections, are some of the busiest in the supermarket. But seasonal staffing presents a challenge here, since workers in these departments do more than just stock shelves. They’re arranging bouquets, carving turkeys, building displays and decorating cakes. It’s the sort of highly technical work that can’t be taught in a matter of days or weeks.

So how can supermarkets incorporate seasonal hires into fresh departments? According to Lavagetto, it’s important to prioritize labor. Low-skill seasonal hires should handle basic care and maintenance while full-time employees handle the more technical work. Even if a store doesn’t hire seasonal workers, Lavagetto explained, managers should move employees from slower departments into busier ones for support.

“Valentine’s Day is huge for floral but not for the rest of the supermarket, so there’s no reason why you couldn’t use other workers on the payroll in that section,” said Lavagetto.

John West, director of retail consulting at Workforce Insight, a labor consulting firm based in Denver, agrees that seasonal workers should be used primarily for care and handling jobs.

Sources said the first step in successful seasonal hiring is to plan early. At Day’s Market in Heber, Utah, CFO and co-owner Steven Day already has a commitment from someone to serve as manager of the store’s seasonal bedding plant section next spring.

“We try to bring in someone who’s qualified, who knows what to plant and where,” he said.

At Marketplace Food & Drug, meanwhile, Stromberg makes sure to book her decorators for graduation season a year in advance.

“Because of the volume we do, I have to have them on my calendar as early as possible,” she said.

Leading up to the holiday season this year, West said supermarkets should begin hiring temporary workers in October so that they’re fully trained and in place by the beginning of November.

“Getting ahead of the curve will provide the best selection of seasonal workers before they’re picked over by the competition,” said West.

Proper training is also crucial, sources explained, to bring employees up to speed on company standards. They should know how to not only do their job but how to engage customers, as well. In addition, Lavagetto said, department managers should go the extra mile by giving seasonal employees personal attention. Doing so can make them feel attached to the company and willing to put in the extra effort.

“Any seasonal worker is going to go through store training, but it’s also important that department managers take them under their wing and show them how everything works,” said Lavagetto.

Store managers can also build loyalty among seasonal employees by being organized and consistent, West said. Workers should know ahead of time how many hours they’ll be working each week.

In terms of finding good seasonal employees, it helps to be resourceful. Charlie Coward, manager of Pennington Quality Market in Pennington, N.J., said he’ll sometimes hire high school and college students during school breaks who have worked for him in the past.

“We’re able to call on some people locally when we need them,” he said.

Ultimately, though, there’s no substitute for having the right connections. For the past eight years, Day has been able to recruit experienced managers for his bedding plant department. That’s no easy task, given the demands of the section.

“Bedding plants require constant care, constant turn and knowing when to buy and how much to buy,” said Lavagetto. “You really have to know what you’re doing.”

And yet, according to Day, this year was the most profitable one yet for the department. He brought in a local woman with nursery experience who was able to market, maintain and quickly turn over plants for sale. In the end, she earned a bonus and committed to working at Day’s again next year.

“Sales really depend on how good that manager is,” said Day.

The seasonal decorators Marketplace Food & Drug hires in May are oftentimes store veterans, people who understand how the department works and are able to meet Stromberg’s exacting standards.

“They know us. They know my level of expectation,” said Stromberg. “By the time that busy season rolls around, you’re so happy to have the help. They’re able to jump right in and decorate along with the rest of us.”

Sidebar: Not So Seasonal

Despite retailers hiring record numbers of seasonal workers over the past year, many supermarkets prefer to rely on their full-time staff during holidays and other busy occasions. Particularly in fresh departments like bakery, meat and produce, where jobs require a high level of skill, seasonal work can be a difficult fit — not to mention an added expense.

“Our fresh department associates undergo extensive training in order to provide our customers with the best service, quality and education,” said Maria Brous, a spokeswoman for the company.

The United Family supermarkets, Lubbock, Texas, has the same philosophy about seasonal staffing, with a bit of a twist. Spokesman Eddie Owens said the company will add employees during the holidays but will keep them on as full-time workers after that.

“We definitely add part-time people during the holidays, but we usually retain them after that,” he said.

Seasonal workers may only be around for a matter of weeks or months, but that’s no reason to treat them like expendable goods. John West, director of retail consulting at Workforce Insight, a Denver-based labor-consulting firm, advises supermarkets to offer incentives to temporary workers who perform well.

At Day’s Market in Heber, Utah, CFO and co-owner Steven Day offers a bonus to seasonal managers who turn a profit in the bedding plant section, which operates from April through July.

“We figure if the section makes a profit, we should share some of that with the manager who made it happen,” he said.

West said retailers would do well to consider that most enticing of incentives for workers that go above and beyond: full-time employment.