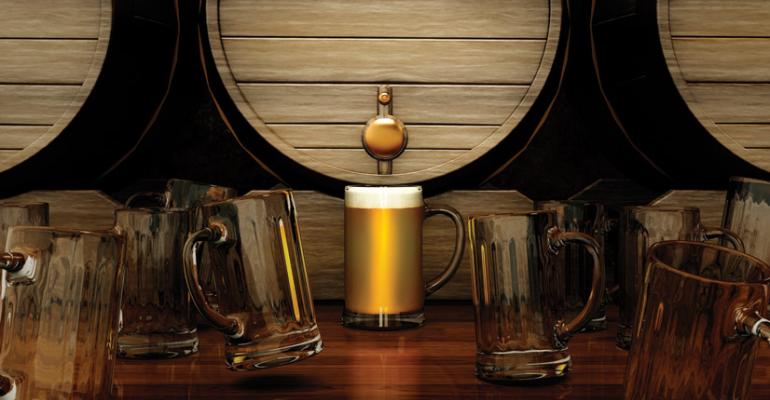 Barrel-aged beer is back

For centuries, beer was made and stored in wooden containers. Today, most is brewed in stainless steel tanks. But some beer makers have brought barrels back to impart the flavor of oak, bourbon, cognac and port into inventive craft brews.

Retailers report strong sales of such products. The latest barrel-aged beer flavors have draft enthusiasts so enthralled, they literally line up at supermarkets when shipments arrive.

At West Des Moines, Iowa-based Hy-Vee, the chain’s stores are challenged to keep barrel-aged beer in stock. According to Jay Wilson, assistant VP of wine and spirits, some shoppers schedule visits based on the launch of a new variety.

“We have a lot of customers who stay up to date on the release of new craft beer products, including barrel-aged beer,” said Wilson. “Sometimes, people are standing here as we stock our shelves. We refer to this type of beer as ‘in and outs’ since we sell out as quickly as we get them in.”

“Barrel-aged beers go back hundreds of years, from the light, tart lambics and Flemish reds and browns of Belgium to big barley wines and stouts that have been thrown in various spirit and wine barrels to add additional complexity by today’s craft brewers,” Bonaminio told SN. “We often build endcaps or displays centered on an oak barrel to showcase new or popular barrel-aged beers. These beer varieties will also be merchandised into the set with their respective region of origin.”

Jungle Jim’s has the same issue as Hy-Vee. Its shelves are sometimes emptied as soon as they are stocked. Bonaminio referred to the hype surrounding these sudsy top-sellers as “off the charts.”

One of the most popular products at the chain is Alltech Brewing’s KY Bourbon Barrel Ale, an amber ale from Lexington, Ky., that spends six weeks aging in freshly used bourbon barrels. Cantillon, a Belgian lambic producer, and Goose Island barrel-aged beer are also sold at Jungle Jim’s.

“Barrel-aged beer runs the gamut of flavors, textures and potency, and they are not all in massive containers and high in alcohol. Beers like lambics, with their moderate alcohol and high acidity, are actually quite quaffable,” said Bonaminio. “This spectrum represents an exciting segment of the industry, both for consumers as well as retailers, wholesalers and brewers.”

Like most craft beer, barrel-aged brands are not mass-produced and therefore, are considered rare gems, said Julia Herz, craft beer program director for the Brewers Association, Boulder, Colo. Herz pointed to the fact that 98% of the 2,700 breweries in the U.S. are small or independent and urged retailers to make extra efforts to call attention to barrel-aged beer, which is among the highest priced within the craft beer category.

“Grouping amidst the cheeses, like King Soopers does, can be effective. I like to say craft beer picks up where wine leaves off when pairing,” Herz said. “And, shelf-talkers sharing style information, flavor profiles, medals from specific competitions and pairing notes can help educate as well as attract the already educated.”

Because of the wide array of flavor profiles and brewing techniques, extensive promotions are important at the retail level and beyond, said Herz.

“Retailers who carry barrel-aged beers often have unique, one-off products that are not the same batch to batch,” she told SN. “It’s often competitive to get some of these products. Thus sharing that a brand is being carried in flyers, newsletters, social media and all means of communication helps spread the word.”

The banner stores owned and operated by Quincy, Ill.-based Neimann Foods sell a lot of craft beer, but only a small number of barrel-aged brews.

“We have authorized some of the Boulevard Cask Series and Goose Island special items for the holidays, but don’t do much with them,” said Martin Miller, beer, wine and spirits category manager for Neimann Foods. “There are so many varieties out there, especially the 22-ounce ‘bombers,’ but they represent a very small percentage of our beer sales overall.”

If consumer demand or distributor push to carry such products were higher, the company’s stores might carry more. But as of yet, there isn’t enough interest to prompt the addition of the aged ale, added Miller.

Retailers that have yet to experience a high demand need only wait awhile, said Bump Williams, president and CEO at Bump Williams Consulting, Stratford, Conn.

“I work with 263 craft brewers in the United States and most are investing heavily in the purchase of oak barrels or are entering into partnerships with distilleries to acquire their pre-used barrels,” said Williams, who advises brewers, retailers and distributors. “They are making huge investments in equipment, additional storage space for their fermenting casks and they are upping their educational efforts that target distributors, retailers and the end consumers.”

With so much capital sunk into production and awareness, barrel-aged beer has yet to see its peak. Once it has, it will still remain an active part of the craft beer category, likely for the next few decades, he added.

Williams warns that retailers who wish to capture a piece of this niche pie must properly prepare or risk being passed over by brewers and their distributors, both of whom are highly selective about where to sell their limited offerings.

“Stores that carry a brand’s entire profile are most likely to be rewarded with a few bottles or even a few cases of limited-edition barrel-aged beers,” said Williams. “Those who take the time to heavily promote the arrival of a barrel-aged beer at the store level and via social media are also appealing to brewers.”

Like Williams, Hy-Vee’s Wilson expects increased sales in the foreseeable future. And, he wants his stores to be on distributors’ lists when it comes time for new shipments.

“I think this subcategory will continue to grow,” said Wilson. “Breweries and distilleries are experimenting with different types of barrels, from bourbon and cognac to various wines, so the flavor profiles that are yet to come will be interesting.”