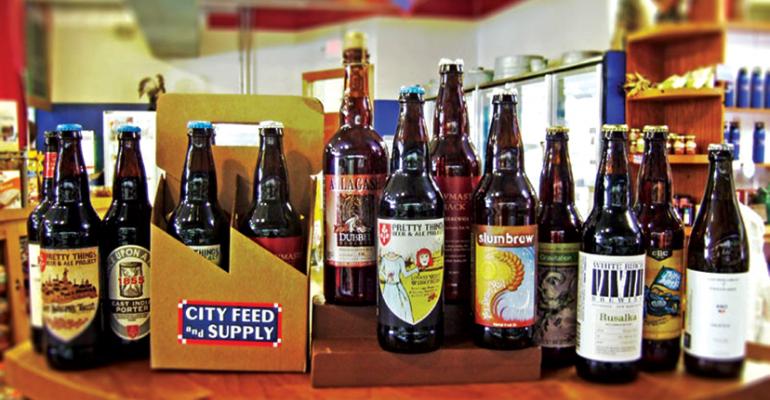 Members can sign on for a 3-month ($120), 6-month ($230) or 12-month ($455) subscription to receive four 22-ounce or larger bottles of regionally brewed craft beer. Monthly selections are made by the two-store independent’s beer monger and paired with local foods like pretzels and mustard, cheese, and savory and sweet spreads. The share offers an easy way to acquaint shoppers with obscure local brews, said David Warner, founder of the specialty market, deli and cafe.

“Customers see so many new craft beers that they’re not really sure how to approach the category. This gives them an easy in,” he said.

Indeed, each quartet is tied by a theme and may include four takes on a single style or four different styles.

“Sometimes it’s a seasonal theme, a style theme or a compare and contrast theme,” Warner said.

Warner came up with the idea for the share when City Feed began building its beer and wine business in the larger of its stores in 2011. Due to space limitations (the store is just 4,000 square feet) City Feed only merchandises 75 SKUs of beer. But so that it can introduce a range of brands and styles, it continually changes the mix. Over the last two months, for instance, 150 beer SKUs have been merchandised, Warner explained.

“We don’t have a lot of shelf space to dedicate to our beer and wine; it’s 12 linear feet, so we were trying to think of different ways to build relationships with consumers and showcase what we are doing, which is highlighting New England craft beer,” he said.

A community supported model was a natural fit for the retailer, which sources local products from small farms and producers.

City Feed is so dedicated to the concept that it allows farmers and fisherman to use its stores as drop-off locations for their CSA programs, even when they’re distributing competing products.

“We see it as a community building exercise that works for everybody in the long-term,” said Warner.

Beer share enrollment peaked around Father’s Day, with customers gifting 3-month shares, but now that those subscriptions have ended membership has fallen off a bit. Presently about 70 people take part in the share.

“We’ve only been doing it for about a year but we see that it ends up being a really great gift item,” Warner said.

Gift subscriptions cost $5 extra and begin with a single 22-ounce beer presented in a gift box with instructions on how to register.

The brewers involved in the share are pleased with the attention the program brings to their beer.

“Craft brewers are excited to participate and believe this is a real business builder,” Warner said.

“The beer share is the best thing to happen to me this year! Great selections! I’ve already bought the Rising Tide and Total Eclipse 3 times over. Great stuff,” said one satisfied customer.