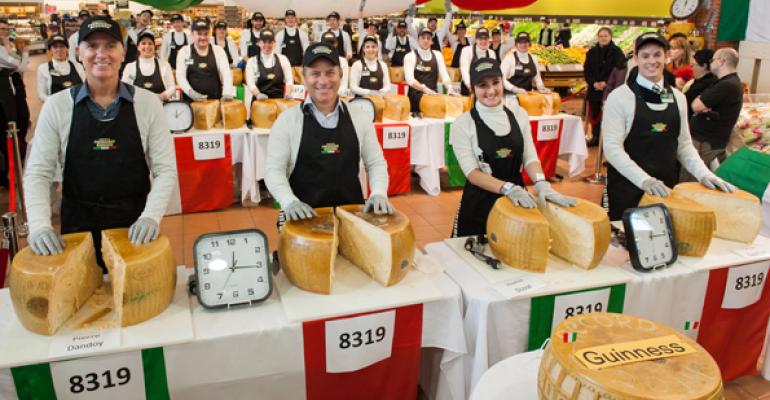 Loblaw Cos. took back the record for most Parmigiano Reggiano cheese wheels cracked simultaneously with 1,008 wheels cracked at banners across Canada on March 22.

The Canadian retailer once again usurped Whole Foods Market for the Guinness World Records title. Whole Foods initially set the record in 2008 with close to 300 wheels cracked before Loblaw stole it in 2012 with 305 wheels. In 2013, Whole Foods regained the title by simultaneously cracking 426 wheels of cheese. Whole Foods also broke its own record in 2010 and 2011.

For the most recent attempt, 360 Loblaw banner stores participated.

"Today was a memorable day for Loblaw and our colleagues. It was an overwhelming experience to celebrate this achievement with our customers and store teams at more than 360 stores; we couldn't have done it without them," Metzi Liau, Loblaw senior category director, said in a press release. "Our colleagues were specially trained to crack the wheels in the traditional style upheld by Italy's Parmigiano Reggiano Cheese Consortium, and we are thrilled to have achieved this world record."