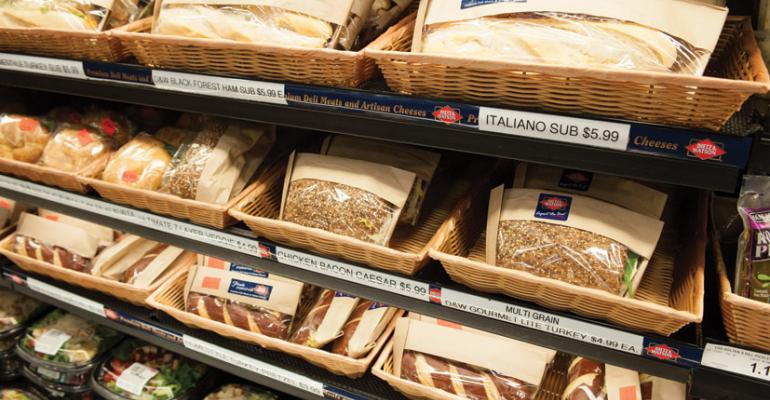 Strack & Van Til stays true to its deli roots

Strack & Van Til has modernized its grab-and-go sandwiches, but the northwest Indiana chain is continuing to provide its customers with the popular comfort foods they love.

“People eat what their families ate,” said deli director Larry Malchick. “But the future is going to be different. [People] will have different tastes.”

The banner, owned by Central Grocers, has 20 locations with 19 in northwest Indiana and one in Chicago.
In September 2013, Strack & Van Til rolled out a new sandwich program that emphasizes delivering the freshest ingredients possible to its customers, said Brenda Wright, merchandiser for the St. John, Ind., store.

“We had had our other sandwich selections for several years and they were out of date. Now they’re more modern. To stay with your competition, you have to update,” she said.

The breads previously used for sandwiches were the same as those available on store shelves. For the new program, the breads are made from frozen dough that is brought in every day and baked fresh in-store.

More contemporary selections are used such as pretzel rolls and multi-grain subs. The retailer also updated the meats and cheeses to be the same that are offered in the deli case. 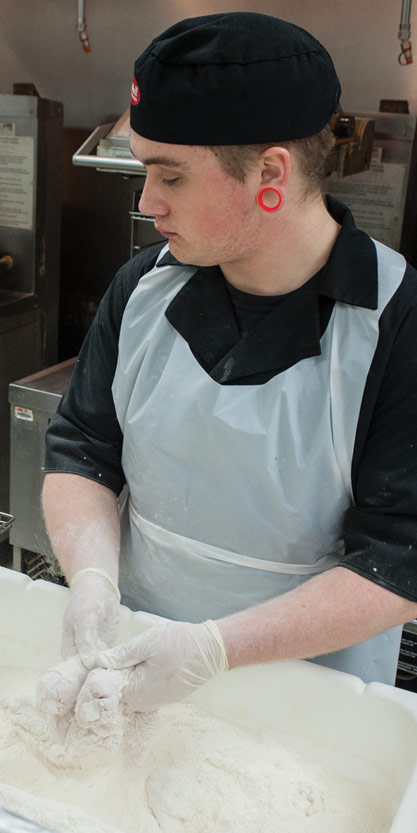 The new sandwich recipes were created and tested at the St. John store, said Wright. The deli manager experimented with different combinations of breads, meats, cheeses and toppings like pesto, red peppers and peperoncini.

Finally, 16 new sandwiches were launched, among them Rustica Italiano, Italian meats and cheeses on a Portuguese rustic roll; and Home Style Turkey on a pretzel roll.

The sandwich program rolled out six stores at a time and was completed in January 2014. It has been very well received in some stores, said Wright. Some tweaking of recipes may occur to accommodate the tastes of customers at the different Strack & Van Til stores.

“There’s a difference in taste from town to town. You go three miles and everything changes,” said Malchick.

While the new sandwiches grow in popularity, the undisputed best seller at Strack & Van Til is fried chicken. Malchick said weekly sales chainwide average 50,000 pounds a week. It’s a must-have menu item at graduation parties in the region and on Christmas Eve the Schererville, Ind., store sells 10,000 pieces, he said.

He said the retailer uses fresh, not frozen, chicken, receiving two truck shipments per week. The pieces are hand breaded in a secret mixture of ingredients developed in-house, and then fried in high-pressure fryers.

“The chicken is moist and delicious, and the breading isn’t as salty as other commercial breading. It’s the best chicken in town,” said Malchick.

To appeal to the needs of an increasingly health-conscious customer base, Strack & Van Til also offers rotisserie chicken, and this year added oven-grilled chicken. The rotisserie chicken is also used to make the store’s Rotisserie Chicken Salad sold in the deli case. 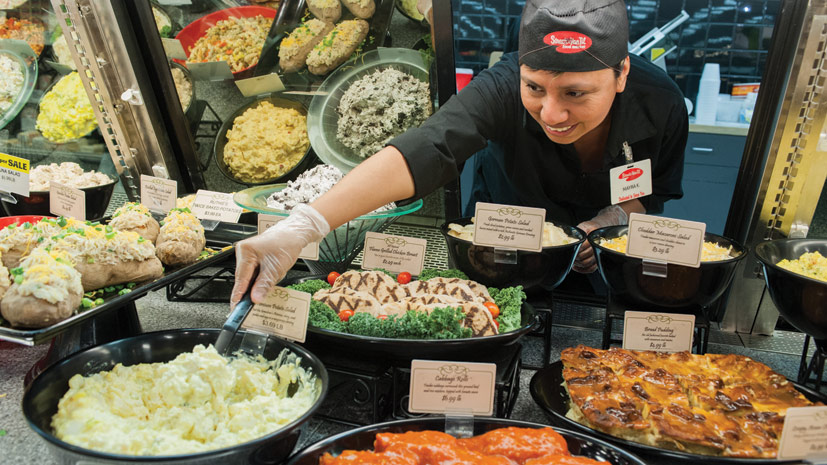 Preparing seafood for customers is a service that sets Strack & Van Til apart from its competitors, said Malchick. “We started doing that a long time ago. They were frying fish when I got here 24 years ago.”

“We encourage our associates to ask every guest if they want their fish prepared in the store,” said Wright.

She said that 25% of customers request the service.

Among the most popular fish selections are salmon, tilapia, catfish and swai, a farm-raised relative of the catfish. Preparation methods are frying, baking, steaming and grilling. All stores fry and bake fish, but not all yet have the equipment to steam and grill, said Malchick.

Frying is the most popular means of preparing fish in-store, but grilling is gaining in popularity. Malchick said the retailer started by using George Foreman Grills but have now graduated to charbroilers and other newer technology.

“The equipment has to fit under exhaust hoods. We have to keep enlarging our production areas in the back of the house. It’s more like a restaurant than a grocery store,” he said.

There is no additional charge preparing seafood, but for breaded preparations, Wright said seafood is priced based on the breaded weight of the product. For grilled or baked seafood, customers can choose from three seasonings: 6 Pepper, Lemon Pepper and Cajun, or a combination of the three.

Customers can also buy to-go seafood plates such as the lake perch with sides of french fries and cole slaw.
The two busiest days for seafood preparation requests are the first Friday in Lent and Good Friday, said Malchick. But Wright said Fridays are always busy behind the seafood counter.
“Many of our customers still associate Friday with fish,” she said.

Deli salads are also a big part of the Strack & Van Til tradition. From 35 to 40 are available every day in the deli case, said Malchick, and about a dozen are exclusive store recipes.

“Some of these recipes have been around 30, 40, 50 years,” he said. Early in the retailer’s history, employees would contribute recipes that would become part of the regular deli offerings.

One of the oldest store recipes is the Premium Potato Salad, and it’s the most popular, said Wright.

At one time, all Stack & Van Til deli salads were made onsite, but demand and health regulations have put almost all of their production in the hands of outside vendors. But Malchick said the retailer has worked closely with them to reproduce the original flavors.

Malchick said Strack & Van Til’s goal is to maintain northwest Indiana’s traditions while responding to the needs of younger customers who may work in nearby Chicago.

“Strack & Van Til is tried and true Midwestern,” he said. “We’re trying to stay one step ahead [of our competition] while staying truly who we are.”