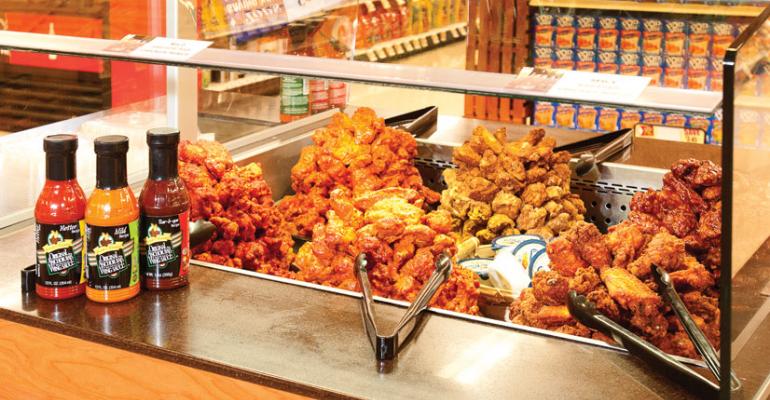 Tops Friendly Markets, Williamsville, N.Y., has been mixing things up in the deli and prepared foods departments.

New comfort food entrees like pulled pork, white cheddar pasta and ribs have been popular in the cold weather.

“We just wanted to add some excitement,” said Zwirlein.

“We’re trying to get better adding limited time offers and seasonal varieties and just keeping it exciting and new, and leaving enough selection and variety available to the stores so that they can pull some different things in and out of their stores when they feel they need to make some changes.”

Tops chose the first week of December for the relaunch of the hot bar in order to expose as many shoppers as possible to the new products during the holiday season, said Jeff Culhane, VP of perishable sales and merchandising at Tops.

Pizzeria in a supermarket

“Our thought behind putting the pizza in a box, with upstate New York [being] very much a pizzeria town, when you take the pizza home — whether it’s hot to go or take and bake — you’re taking a pizza in a box home. It gives you the whole experience of a pizzeria pizza,” Culhane said. 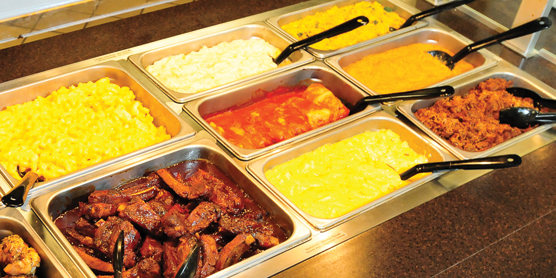 Tops competes with the many surrounding pizzerias with competitive pricing, and is getting the word out about its specialty pizza through ads and a pizza of the month promotion, said Zwirlein.

The chain recently held a contest where store associates submitted ideas for specialty pizza recipes, and customers voted on their favorites on Facebook. The customers who voted received a $1 discount on pizza at the store. Tops is adding one of the winning recipes, a roasted pepper, artichoke and chicken pizza, to the menu shortly.

One of Tops’ bestselling specialty pizzas is a buffalo chicken wing pizza with blue cheese, and its breakfast pizza has almost a “cult following” across all Tops’ locations.

“It’s American cheese and scrambled eggs and crispy bacon and traditional mozzarella that you’d find on a regular pizza and it’s really, really delicious and not very good for you,” Zwirlein said with a laugh. 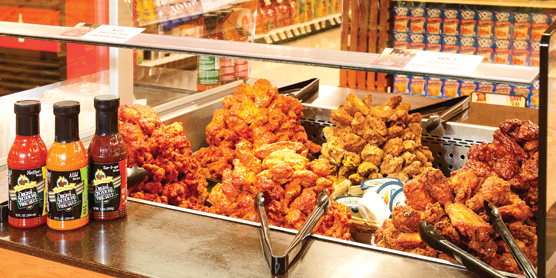 Tops’ fried chicken program — made with fresh, never frozen chicken — is also a standout across its locations in New York, Pennsylvania and Vermont.

“Just this past summer [the signature fried chicken] was rated ‘Finger Lickin’ Awesome’ by Buffalo Magazine. And we didn’t even know they were doing this research,” said Zwirlein, who noted that the chicken received a rating of four “drumsticks.”

The supermarket has also seen its fish fry dinner gain momentum. The beer-battered haddock comes with coleslaw and a dinner roll.

“We make it onsite and it’s hot, generally made to order, but during the Lent season, which is coming up, we do set up stations where we’ll prepare as much hot product ready to go that we can handle and work through in a 15-minute time period,” Zwirlein said.

Tops takes great care to make sure that the deli and prepared foods areas in each of its locations appeal to the shoppers in that market. 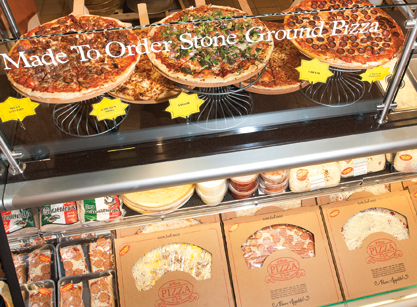 “When we are looking at products and programs, we have offerings in Buffalo that we don’t offer in Syracuse because they’re not relevant to the Syracuse market. We have items in Erie, Pa., that are only for Erie because that’s what the consumer in that market wants,” said Culhane.

“We try to tailor our offerings to and towards the customers and what their wants and desires are within that particular market.”

One way that Tops customizes its offerings is by partnering with local brands that consumers will recognize.

“We formed a partnership with the Anchor Bar [restaurant] here in Buffalo where legend has it the chicken wing was created,” said Zwirlein.

Tops offers coffee from Tim Horton’s café and bakeshop, a business that Zwirlein said is very popular around Buffalo. The retailer also partners with national brands that consumers will immediately accept.

As Tops has expanded to new locations, converting existing retailers to Tops banners, the chain has made sure to work closely with the store team to get to know the shoppers’ prepared foods preferences, said Culhane.

“While we try to incorporate the core Tops programs into those stores, we do allow that store to kind of keep that local flair, that local offering so the consumer still connects to that store even though the front of the banner may change to now say Tops; it still maintains its local niche.”