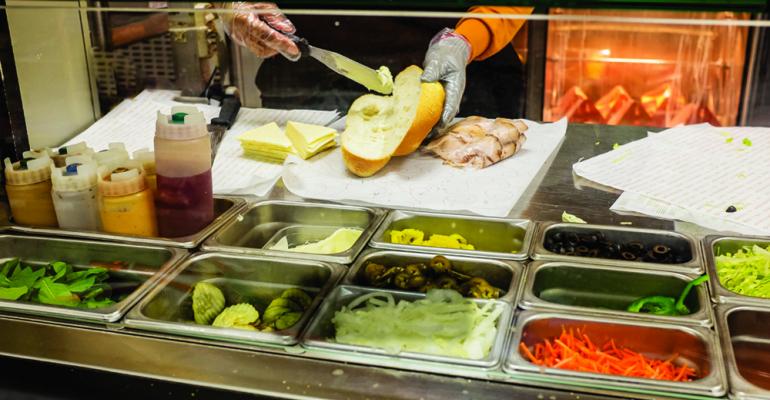 photographereddie/IStock/Getty Images Plus
While meat and cheese sales at the deli are up, prepared foods have seen steep declines since the onset of the coronavirus crisis.
Product Categories>Deli

Sales during lockdown a mixed bag for deli

After an initial coronavirus surge, sales in the deli department are dropping

As coronavirus began to take hold in mid-March, retail grocery experienced a huge surge in stock-up shopping across the entire store, covering center store and all fresh categories. But within fresh, some categories did significantly better than others. Even with a bump at the outset of the pandemic, as lockdowns nationwide began to take effect, in-store deli has been struggling.

While initially increasing sales by up to 15.9% year-over-year for the week ending March 15, according to IRI date, it was clear that the deli department was trailing other fresh categories. During that same time period, the total fresh perimeter was up 45.1%, with meat (76.7%), dairy (60.0%) and bakery (78.8%) leading the charge. Meat, in fact, would continue its unabated rise with a 91.3% year-over-year increase the following week (ended March 22), while deli flattened to a 1.3% increase. And that would be the last good news for the deli department for a while.

While it’s not all doom and gloom for the deli — meats and cheeses are up — the decline in prepared foods is taking its toll. During the first week of April, the deli department experienced year-over-year sales increases for cheese and meat, but deep declines for deli-prepared as many stores had closed or limited operations of made-to-order counters, self-serve buffets, salad bars and hot bars.

Working with 210 Analytics LLC’s president Anne-Marie Roerink and IRI, the International Dairy Deli Bakery is releasing weekly sales trends reports during the COVID-19 crisis. Here are the most recent highlights on the deli category:

Random-weight deli meat sales increased 6.2% in dollars over the week of April 5, with volume sales up 1.5%. Deli meat sales peaked three weeks prior, increasing by 40.5% year over year (week ending March 15). It appears disproportionally more of the deli meat dollar is going to prepackaged meat amid COVID-19 sales. Both volume and dollars for prepackaged deli meat were up significantly more than that of random-weight deli meat.

“Over the past few weeks, many retailers have taken safety measures that have closed cut-to-order counters and instead are providing prepackaged inventory for easy grab-and-go, but still in random weight,” Roerink noted. Shoppers commented on the importance of finding a way to provide both package size variety and the ability to customize even with the cut-to-order stations closed. Some retailers have ramped up their online meat/cheese deli ordering system to provide customization without the in-store interaction.

One shopper commented to the Retail Feedback Group’s Constant Customer Feedback (CCF) program, “Lunch meats and cheeses were precut and already packaged. This was great, so much better than prepackaged! But both the pre-sliced cheese and lunch meat are close to a pound each. Is it possible to have some smaller packs maybe a quarter pound or half pound?” 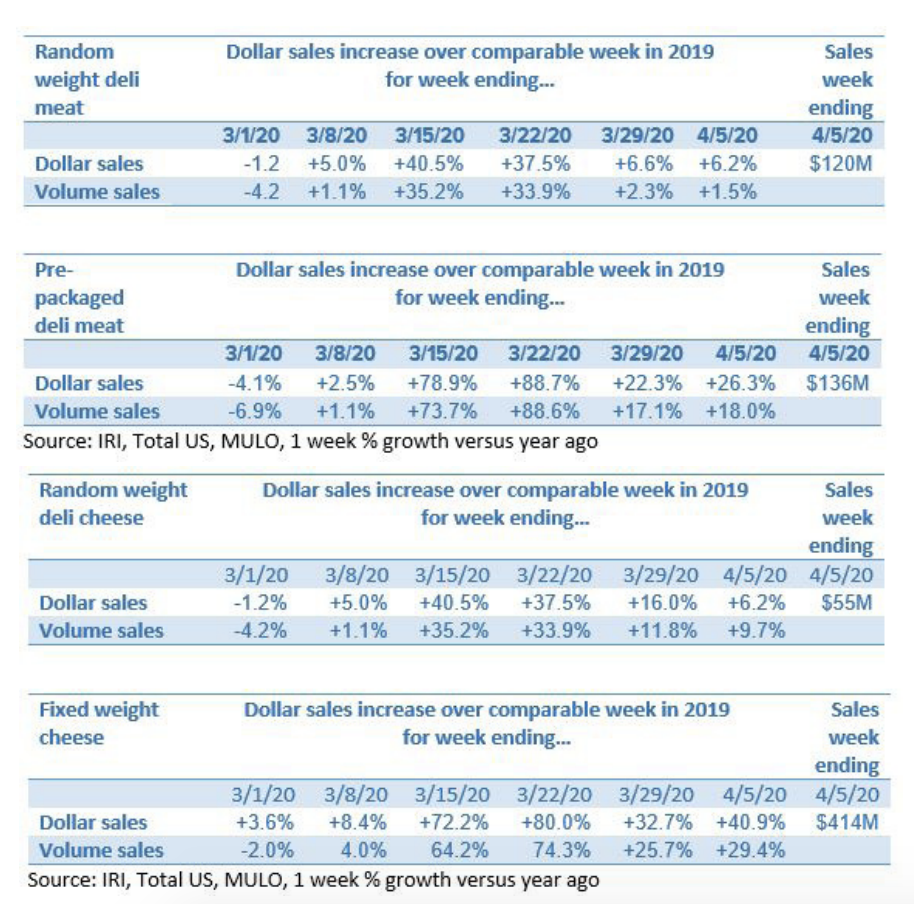 Random-weight deli cheese sales increased 6.2% over the week ending April 5, with a slightly higher gain in volume. “Just like seen in deli meat, packaged cheese in the refrigerated aisle increased significantly more, at 40.9%,” said Angela Bozo, education director with IDDBA. “With the total sales of prepackaged cheese being more than seven times bigger than random-weight deli cheese, the much higher increase signals significantly higher absolute dollar gains. Just like seen in other areas of the store, packaged cheese is in demand, likely driven by higher everyday demand, click-and-collect orders, speeding up the shopping trip and sheer availability.”

Cheese was another area with continued stockouts the first week of April. Shoppers commented on substituting based on availability. One shopper on the Retail Feedback Group’s Constant Customer Feedback (CCF) program commented, “Blocks of cheese in dairy case were mostly sold out. Settled for pre-sliced cheese squares.” 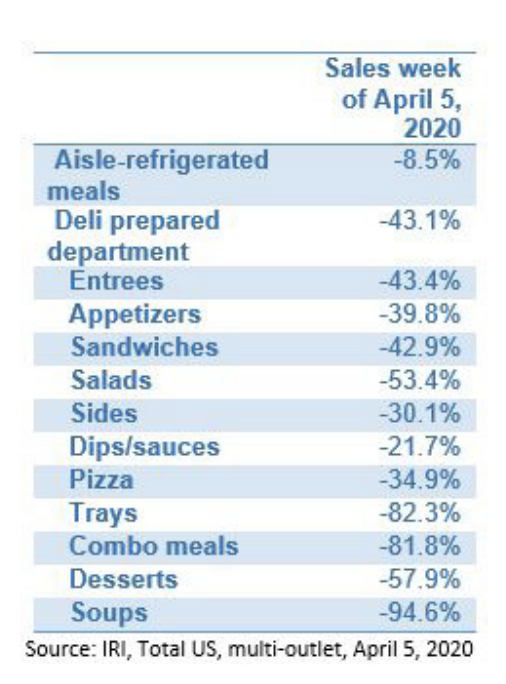 As even more grocery retailers closed prepared food options, the total deli-prepared category plummeted by just over 43% versus the same week last year. Sales were off for virtually all offerings and meal occasions, whether breakfast items, combo meals, trays or deli pizza.

“As the first waves of panic buying are over, measures to curb the number of people going in grocery stores combined with a slowdown in trip frequency is really hurting the deli prepared area,” said Eric Richard, industry relations coordinator with IDDBA. “The only area that experienced growth were holiday meals with some retailers offering heat-and-eat Easter meal solutions.”