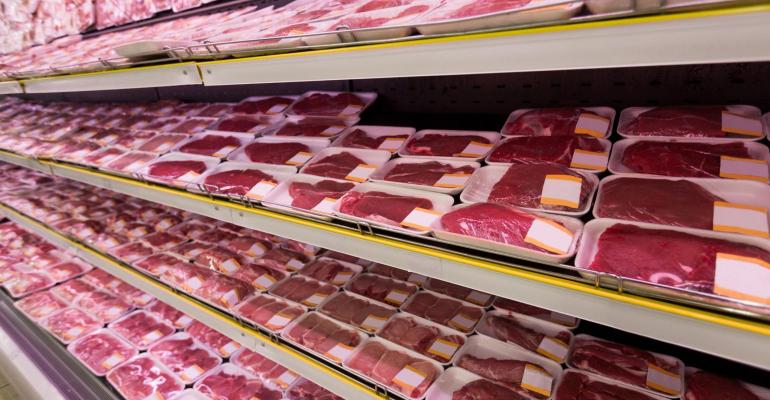 artisteer/iStock/Thinkstock
Meat dollar sales were 41% higher during the week of April 5 this year than last.
Product Categories>Meat

As the COVID-19 outbreak accelerated across states during the first week of April, grocery shopping continued to be affected, reported Anne-Marie Roerink, president of 210 Analytics LLC, in a weekly meat sales update.

“While the big panic-buying weeks in non-edibles appear to be behind us, meat sales remained highly elevated during the week ending April 5,” she said. “The second group of states to issue stay-at-home orders showed a spike in food sales slightly later than the first group and meat dollar sales were 41% higher during the week of April 5 this year than last. Volume sales increased 34% over the comparable week in 2019. Total perimeter sales were up 16%, with meat continuing to be the lead sales driver for fresh departments.”

Roerink relayed that sales were likely influenced by the earlier Easter and a higher everyday demand that is driving a new baseline that sits well above the old normal. At the same time, she said sales results must be seen against the backdrop of many stores having shortened opening hours, closed service departments, metered entry of shoppers, purchase limitations on popular items and continued out-of-stocks for others.

All meat and poultry continued to sell far above typical levels, with turkey continuing to have the highest percentage gains, followed by beef, which also had the highest absolute dollar gains. Year-to-date, dollar gains for total meat are up 18.5% over the comparable period in 2019, according to IRI.

Related: How will the California drought affect food retailing?

The data showed beef and chicken saw the largest increases in terms of dollars while turkey was once again the highest in percentage growth during the week of April 5. In absolute dollars, beef sold an additional $173 million versus the comparable week last year, with 48% of new dollars being generated by ground beef. Chicken generated $65 million more during this first week of April versus the same week in 2019.

In the absence of family gatherings, Roerink said Easter celebrations and dinners, which are traditionally a sales powerhouse for meat, were likely very different in makeup and size. However, increased everyday demand on retail meat sales is likely to continue while social distancing measures are in effect, driven by increased at-home meal occasions, she noted. At the same time, economic pressure is continuing to build with ever-rising unemployment numbers. All things considered, she said shopping patterns will likely remain very different in number, size, day of the week, day part and online ordering trends.

Shortages are also a threat going forward, as meat processing plants nationwide face outbreaks of coronavirus among employees. Last week, Smithfield Foods, which represents 4-5% of U.S. pork production, shut down its Sioux Falls, S.D., plant indefinitely after more than 230 employees had tested positive for COVID-19, out of a workforce of about 3,700 people. Tyson, Cargill and JSB USA have also suspended or shut down operations at some plants across the United States.