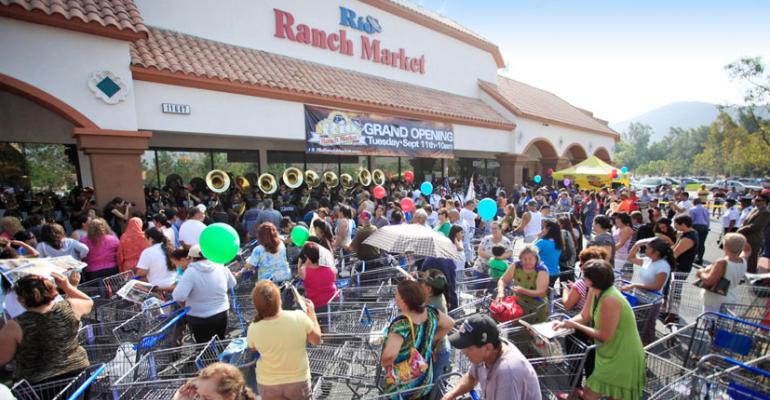 FONTANA, Calif. — Rio Ranch Market here is changing with the times as it expands its base within Southern California’s Inland Empire.

The eight-store operator is adjusting its merchandising to cater to second- and third-generation Hispanics, Omar Milbis, vice president, sales and marketing, told SN — including the addition of pizza to its in-store cafes.

With a lot of discount competition around it, Rio Ranch is also becoming a bit more aggressive on price, he said, and it’s getting into a form of loyalty marketing with a new technology program tied to mobile phones.

The company also plans to add one new store a year over the next five years, Milbis said.

Rio Ranch — founded in 1983 by group headed by Jay McCormack, president and chief executive officer; Mustafa Milbis, vice president; and others — operates its eight stores within a 30-mile area in the San Bernardino-Riverside county area east of Los Angeles, though a store set to open next year in Desert Hot Springs will push its eastern boundary 20 miles farther out.

“That size works best for us because it allows us to get in all the product we need, along with keeping occupancy costs and utilities lower than they’d be in a larger space,” he explained.

Annual volume is running at about $80 million, Milbis said, with same-store sales up 2%. “But we were up 6% last year, and we were hoping to increase that gain this year, but the sales just haven’t been there.

“The reason is, though people are saying the economy is getting better, we think things have flattened out and people have simply tightened up on their grocery spending.”

Rio Ranch plans to open its ninth store next year — a 31,000-square-foot unit in Desert Hot Springs — in an area carved out of an 80,000-square-foot Sears store that will continue to operate in the remaining space. It’s an approach Sears has taken at other locations around the U.S., teaming up with various supermarket operators, Milbis noted.

However, the store will have its own entrance and its own walls separate from Sears, he added.

Rio Ranch opened a store in Fontana last year; one in Perris, Calif., in 2010; and one in Banning in 2009. The other five stores, encompassing three in San Bernardino, one in Riverside and the original store in Chino, opened between 1991 and 2005. All were former chain supermarkets or drug stores.

Once the store in Desert Hot Springs opens, the company hopes to open a new store every 12 to 16 months within the same two-county operating region “because we know the area and the clientele,” Milbis explained.

“Besides, as a small independent, we don’t want to venture too far from home because it could be difficult, and we still see plenty of opportunities here.”

Rio Ranch caters to a largely Hispanic clientele, though that base has changed considerably over the past decade, Milbis said. “More of our customers are second- and third-generation Hispanics who are more acculturated and who tend to speak English. For example, our Fontana store serves a population that’s 70% Hispanic but primarily English-speaking, though we still have bilingual signage.

“Ten years ago the people we hired did not have to know how to speak English, but today it’s less necessary for them to know Spanish.”

Accordingly, Rio Ranch is changing the stores’ product mix and how it merchandises, Milbis pointed out.

“I’d say there’s been a 20% change in our product mix over the last three years,” he said. “In the meat section, for example, Hispanic shoppers have historically preferred thin-cut steaks, and in areas where our customers are less acculturated, that’s still the case.

“But in several of the stores, including Fontana and Banning, customers are asking the butchers to cut the steaks a little thicker. In addition, though the majority of customers still use the service meat counter, more people are grabbing items from the self-service case.”

In produce, the size of the chili displays has gotten a little smaller, Milbis said.

“In addition, while the selections at our in-store kitchens are the same at each store, customer preferences differ. So at stores where we have a large number of customers from South and Central America, fried plantains are a top seller, whereas that’s not a very popular item for people of Mexican descent.

“We’ve also added pizza at the last three stores we’ve opened. We sell pizzas with a variety of toppings, including carnitas or jalapenos, but 90% of the business comes from pepperoni pizza,” the most popular choice among most groups of any nationality, he noted.

“It’s been a bit of a struggle to know what to stock, but that’s one area where our supplier, Unified Grocers [the Los Angeles-based member-owned cooperative] has been helped us over the last 12 to 18 months to determine the right combination of products for each store.

“It’s an ongoing project that’s constantly evolving, and one of the initiatives Unified is working on with us is category management, which is helping us identify merchandising opportunities.”

To let customers know what it’s doing, Rio Ranch is starting to promote differently, “and we’re looking for the right vehicle to get the information out to customers. We still promote in our ads, but we’re also exploring options within the store to educate customers and get our message out.

“For example, we may bring in dietitians to share information with customers about healthy alternatives — a program we hope to be able to introduce next year.

Rio Ranch competes with a host of operators, including Stater Bros., Food 4 Less, Wal-Mart, Target, Costco and WinCo, plus two other Hispanic operators — Cardenas and El Super — virtually all of whom are price-oriented.

“We used to focus less on price,” Milbis told SN, “but price has become more important over the last several years, and we’ve been more sensitive to it and offer hotter ads.

“But our primary focus is still on variety and selection, and we believe we offer a bigger selection than most of the other operators and definitely a wider variety and a better experience with our full-service bakery and in-store kitchen.”

To differentiate its stores and to offer something its competitors don’t have, Rio Ranch introduced a new program at the end of July that enables shoppers to earn cash rewards by using a free phone application.'

The program features offers from Ibotta, a Silicon Valley-based technology company, as well as offers from leading CPG companies.

Milbis said the program “allows us to reward shoppers and interact with customers in a fun and exciting way without the need for a loyalty card. Our shoppers simply select Ibotta offers that interest them and then purchase the product in store.

“Once a shopper connects with the app using a phone number, Ibotta offers can be redeemed automatically at checkout, and the cash earnings are then available for withdrawal at a shopper’s convenience.”