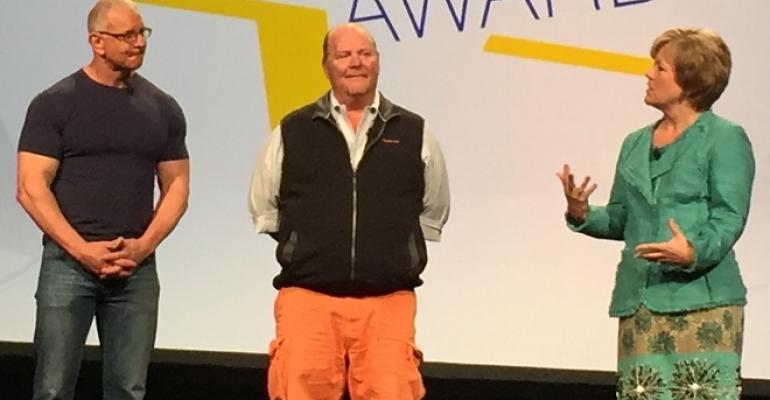 Two TV chefs emerged from the small screen Wednesday to coach the supermarket industry on making food fun and easy.

Mario Batali and Robert Irvine, restaurateurs known for their Food Network roles, told an audience at FMI Connect in Chicago to give special emphasis to making men feel comfortable with cooking and shopping.

"Males have no patience," Irvine said. "But they want to look like superheroes to their wives and girlfriends."

That means retailers "need to make it more fun, with brighter stores, easy-to-find items, and a good experience rather than a mundane chore."

Batali said of male shoppers, "You need to empower them. They can be rock stars with less effort than they imagined."

The two chefs headlined an education session at the FMI conference by responding to questions from Leslie Sarasin, president and CEO of FMI.

One of the key ingredients to retail success is to put employees in the spotlight, Batali emphasized.

"Don't be afraid to let the people working in your stores be the stars. That will help to ensure that store teams and customers regularly interact with each other."

It's also imperative to make sure those being led are on board with your leadership, Irvine said.

"We're taught to lead from the front, but you also need to provide tools so people can do their jobs," he said. "You need buy-in from those people."

Despite big differences in their careers, both chefs entered the field at a time when cooking wasn't really cool, but that changed over the years.

Irvine grew up in England and became a navy cook.

"It didn't seem like a good move at that time to be a cook," he recalled.

He eventually made his way to the United States, worked in hotels for the Trump organization, and then started his own company and became involved with the Food Network.

"Now we are rock stars and try to give back to the community."

Batali spent his childhood in Washington state, and later on "realized I liked cooking but that becoming a cook wasn't cool."

However, "Cooks emerged from the background to become the Derek Jeters" of the world," he said "People's fascination with food went beyond nutrition to excitement, and food continues to evolve."