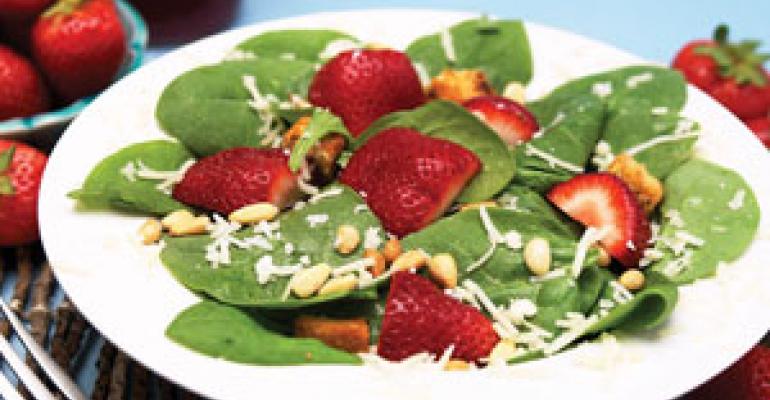 Organic ingredients and locally grown food products are increasingly important to restaurant goers, and operators and chefs are adding them to more menus nationwide, according to the National Restaurant Association's 2007 Restaurant Industry Forecast. According to the chefs surveyed, consumers have a growing appetite for healthful foods, organic products and some fusion cuisines, the report stated.

Organic ingredients and locally grown food products are “increasingly important” to restaurant goers, and operators and chefs are adding them to more menus nationwide, according to the National Restaurant Association's 2007 Restaurant Industry Forecast.

“According to the chefs surveyed, consumers have a growing appetite for healthful foods, organic products and some fusion cuisines,” the report stated.

In fact, in a ranking of the top 20 hot restaurant trends of 2007, locally grown produce came in at No. 2, and organic produce at No. 3. Even grass-fed and free-range meats made the list, at Nos. 18 and 19, respectively, according to a recent NRA survey of 1,146 members of the American Culinary Federation.

In a separate NRA survey of operators, “more than half of fine-dining operators who serve organic or locally sourced items anticipate that these items will represent a larger proportion of their total sales in 2007.”

But as the mainstream appeal of these foods has grown, they've begun migrating beyond upscale establishments, finding their way into concepts that are accessible to a broader range of consumers. The survey noted that “casual dining and family dining operators also expect locally sourced and organic items will represent a larger proportion of their sales in 2007.”

Much of that may be due to the rising popularity of the natural-and-organic fast-casual chains, like O'Naturals of Portland, Maine, which received the designation of “Environmental Leader” by the Maine Department of Environmental Protection in April for its units in Falmouth and Portland.

O'Naturals opened its first store in Falmouth in 2001 and currently operates four stores: two in Maine, one in Massachusetts and a franchised unit in Wichita, Kan. “Through our franchising we have commitments for 11 additional stores over the next two years,” said Jay Friedlander, who goes by the whimsical title of chief operating O'Naturalist.

The concept's influence is spreading. The company has “gained a lot of recognition within the industry over the years,” even securing a hottest new concept award from a leading food-service trade publication in 2004, he said.

“We know from conversations with other operators that we have been influential in pointing out new trends,” Friedlander said. “When you are starting to see organic coffee at McDonald's and Burger King is talking about humane animal husbandry practices, you know the world is changing.”

Made with organic, wild-caught, free-range and all-natural ingredients, O'Naturals' most popular dishes are its organic flatbread sandwiches, especially “perennial favorites” like the wild, prairie-raised bison meatloaf sandwich and the free-roaming chicken with tomato, mozzarella and fresh basil with balsamic vinaigrette. “The flatbread is made from scratch every day and baked fresh,” Friedlander said. “Usually our seasonal specials are amongst the hottest items.”

The concept has added new menu items over the years, including seasonal items, flatbread pizza and breakfast offerings as well.

“We have four new specials every month that rotate with the seasons,” Friedlander said. Spring offerings include a tuna melt; a sesame spinach and feta panini; a cheddar and salsa veggie burger; and a turkey pesto panini. Summer menu items coming in June include a lobster roll, a crab roll and chicken salad with rosemary onions.

Organic To Go, the all-natural-and-organic catering concept founded in 2004 by Jason Brown, chief executive officer, is on the move as well. The company went public in February 2007. Total investment in the company since its November 2004 launch is at $21.95 million, the company said.

In February 2006, Organic To Go became the first fast-casual restaurant and retailer to be certified organic. The company's products contain no harmful pesticides or synthetic hormones, and food ingredients are sustainably produced to help preserve the environment.

The company opened its newest retail cafe in February in Los Angeles — its seventh unit there — and now sells through 30 additional locations spread over the greater L.A. region, including the University of Southern California, University of California Los Angeles and four other college campuses, as well as Los Angeles International Airport and several corporate campuses. At year-end 2006, the company had 11 retail stores and 10 wholesale locations.

Los Angeles is the concern's second-largest region — and second in importance — after Seattle, and the City of Angels is considered a key to the company's growth plans. Organic To Go cited a 61% increase in 2006 year-end revenue over the prior year. Its November acquisition of L.A.-based caterer Vinaigrette's Full Spectrum Catering, with annual sales of some $2.5 million, helped to fuel that expansion. Company-wide sales came to $9.8 million last year.

The company's culinary director, chef Greg Atkinson, created a new seasonal menu to accompany the Los Angeles expansion, including a new salad made from organic grapes, walnuts, apples and blue cheese, with mixed greens and a fresh-made citrus vinaigrette dressing. Some 70% of Organic To Go's new menu consists of organic ingredients, the company said.

The Grilled Wild Salmon Salad entrée includes grilled wild Alaskan salmon, Asiago cheese and organic grape tomatoes with a honey-lemon vinaigrette on a bed of organic romaine lettuce. And the popular Natural Ham and Cheddar Sandwich is made of natural ham, organic cheddar cheese and lettuce, served on artisan sourdough bread with honey mustard dressing on the side.

The company has made a big business out of catering and corporate delivery, which now account for 60% of sales. The average catering check is $200, and much of it comes from repeat customers; some 80% have purchased Organic To Go catered meals more than five times, the company said. That's due to the company's target audience: the “67% of American workers” who eat their lunch at their desks, according to statistics from the American Dietetic Association.

Founded in 1993, Chipotle Mexican Grill is easily the best-known of these concepts, and the venerable natural fast-food chain's growth is showing no signs of slowing. The company's first-quarter 2007 results for the period ending March 31 show a revenue increase of 26.2% over the same period last year, to $236.1 million, from $187 million in Q1 2006; and same-store sales rose 8.3%, compared with 19.7% during the prior-year period.

While the company's menu of burritos, tacos, burrito bowls and salads are already made with fresh ingredients, the stellar first-quarter results reflect the company's efforts in pursuing its Food With Integrity initiative — Chipotle's move to seek out and augment its menu with foods that are “sustainably grown and naturally raised with respect for the animals, the land, and the farmers who produce the food,” the company said in a statement.

The chain's naturally raised meats are free of antibiotics and added growth hormones, and the livestock are raised on a vegetarian diet and under humane conditions. In addition, the concern recently introduced naturally raised chicken in its home state of Colorado, one of its largest markets.

“Now two-thirds of the chicken we serve is naturally raised,” said Steve Ells, the company's founder, chairman and CEO. “As we advance Food With Integrity, we move closer to our goal of changing the way Americans think about and eat fast food.”