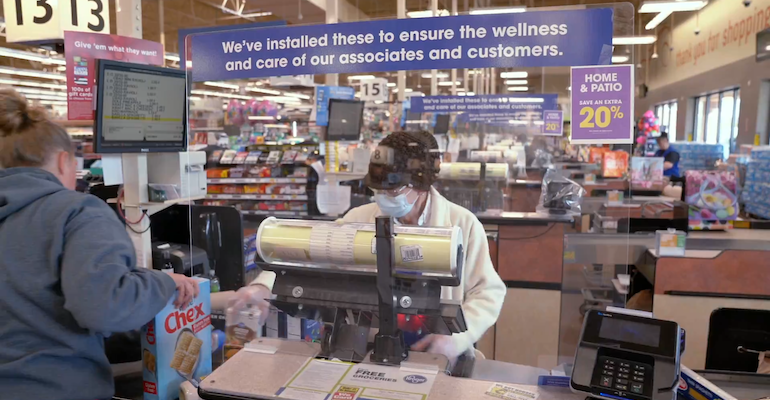 Kroger
The Kroger Co. last week announced $130 million in "thank you pay" for frontline grocery workers for their service during the pandemic.
Issues & Trends

The United Food and Commercial Workers (UFCW) union said today that at least 68 of its grocery worker members have died from coronavirus and over 10,000 have been infected or exposed to COVID-19.

The updated figures represent double the total of infections and deaths from five weeks ago, according to UFCW. With the virus taking a rising toll on grocery store associates, UFCW International President Marc Perrone on Wednesday called for food retailers to extend hourly hazard pay — also known as “appreciation” or “hero” pay — for frontline workers and for government and retailers to better police safety practices in stores, including the possible use of security guards.

Related: Kroger provides $130 million in 'thank you' pay for associates

“Amazon, Whole Foods, Kroger and other companies have shamefully announced pay cuts for millions of these workers on the front lines, even as each company experiences record sales. When workers face higher risks, they should be paid more. These workers are not facing fewer hazards and are still putting themselves in harm’s way, interacting with thousands of customers a day, to help ensure our families have the food we need,” Perrone said in remarks for a national press call today. 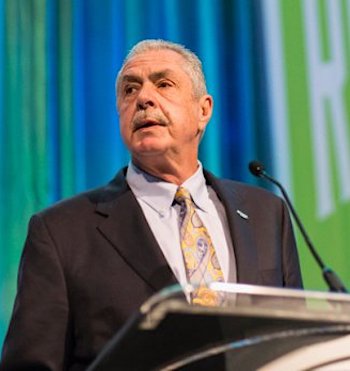 Until the need to wear masks and other protective equipment is no longer necessary, grocery retailers should reinstate hazard pay that has lapsed or extend it if nearing expiration, according to Perrone (left). He said leading retailers such as Walmart, Amazon/Whole Foods, Trader Joe’s and Kroger have not released internal numbers on worker infections, exposure and deaths.

“While we hope some of these companies do change, and follow the lead of other national companies like Albertsons and Ahold [Delhaize USA] who acted responsibly to extend this hazard pay, we are preparing options to ensure that every American knows which supermarket companies stood by their workers and their families and which did not,” he said. “American consumers and workers deserve better, and we will continue to stand with them.”

Cincinnati-based Kroger, the nation’s largest supermarket operator, said that since March it has invested $700 million to reward frontline workers and protect associates and customers. Kroger — along with Albertsons Cos. and Ahold Delhaize’s Stop & Shop — also has joined an effort by UFCW to get grocery workers classified as first responders during the COVID-19 crisis, which would give them priority access to testing and personal protective equipment (PPE).

Last week, Walmart said that on June 25 it plans to pay a second cash bonus for all U.S. full- and part-time hourly associates, including at Sam’s Club. The bonus will be the same as the one announced March 19: $300 for full-time and $150 for part-time hourly and temporary employees. Recipients will include hourly associates in stores, clubs, supply chain and offices, and drivers, as well as assistant managers in stores and clubs. Walmart said the latest round of bonuses will total $390 million and, including earlier payments, the company has earmarked more than $935 million in bonuses for hourly workers so far this year.

In the press call, however, Perrone said such bonuses don’t fairly compensate store associates and other employees for hazards faced during time worked, explaining that the more hours they put in, the more they risk exposing themselves to the virus.

Previously, on March 31, Kroger announced a “hero bonus” of $2 an hour for all frontline grocery, supply chain, manufacturing, pharmacy and call center associates for time worked from March 29 to April 18. That was later extended to May 2 and then to May 17. The company also paid out a one-time bonus of $300 to full-time associates and $150 to part-time associates on April 3.

“Kroger did the bonus pay initially and then went to the $2 per hour. Now the significance of the $2 an hour is that it’s paid on every hour worked, whereas the bonus pay is not. So if we’ve got members working 60 hours a week, or six days a week, by going to the bonus pay [they are] now making less money,” Perrone explained. “So that additional pay is significant to these workers.”

He cited Albertsons/Safeway, Stater Bros., Ahold Delhaize and Meijer as some of the grocery retailers that have extended hourly bonus pay. “I think all companies are trying to figure out how they ultimately deal with this. Our position is, we believe that the virus is going to be here for a while now. It may die down in the summer, but it’s going to come back,” he said. “And when it does come back, it’s going to be difficult to deal with. We want to make sure that we ultimately establish a change in how they deal with this hazard pay, because it is a hazard.”

Four Kroger Co. store employees shared concerns about the safety of their current work environment during the call. According to Kristine Holtham, a 53-year-old Kroger meat department worker in Lansing, Mich., coronavirus has created “a lot of fear in my store,” and each day workers “prepare like we’re going into battle with the virus.”

“We are exposed to thousands of people every day for hours, and the reality is it only takes one person to expose an entire store,” Holtham stated. “Kroger ended our ‘hero pay,’ but the crisis is not over. I face each day with anxiety, and it gets worse when I see customers refuse to wear masks. I am a mother and my children need me to stay healthy.”

Debbie Griffin, a 63-year-old Kroger cashier in Lawrenceburg, Ind., reported that she has been working 60 to 70 hours a week since the coronavirus outbreak began. “As a cashier, it’s hard to social distance from customers. We put our lives on the line every day, and I worry about taking the virus back to my grandchildren or husband,” she explained. “Because Kroger is not requiring our customers to wear masks, it’s putting us in jeopardy. The spread of the virus hasn’t stopped, so neither should the protections or ‘hero pay’ that our families need.”

Steven Brown, a 30-year-old front-end Kroger worker in Columbus, Ohio, noted that the risks he and his coworkers encountered earlier in the pandemic remain. “What changed?” he said. “Kroger, and every supermarket company, should pay every grocery worker in America for the risk we are all facing until this pandemic is over.” 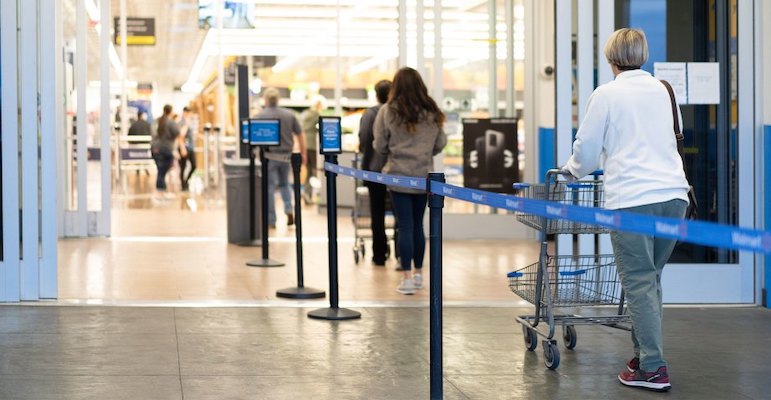 To promote social distancing, Walmart has instituted such measures as one-way aisles and limits on the number of shoppers in stores at a given time.

Regarding safety, Perrone said food retailers need to do a better job enforcing shopper compliance with store policies on protection from coronavirus.

“As this pandemic continues, the threat of this virus is real across every grocery store in America,” he said. “Yet most states and supermarket chains are still failing to enforce social distancing or mask wearing in stores to keep customers and workers safe.”

That may call for the use of security guards, given reports from around the country about customers refusing to wear a face mask and threatening store workers or actually committing violence.

“I had a conversation with the CEO of Albertsons/Safeway this morning before this call, and I told him that we needed security guards inside the stores. We have been pushing for that for quite some time now,” Perrone said. “We think that it should be a security guard or at least the managers of the stores, who has some authority over the actual space to be able to say to somebody, ‘Look, this is our store. I need you to wear the mask, or I need you to do the social distancing.’”

Perrone said that, in a conference call earlier this week, he learned that a store employee had his arm broken after asking a customer to put on a face mask. Raquel Solario, a 55-year-old Ralphs grocery worker in San Diego, reported in today’s UFCW call that she’s received abuse from shoppers during the pandemic.

“I’ve had customers swear at me when we ask them to wear a mask. One customer even told me I might be dead in a month. After work each day, I want to cry, but I don’t have the tears to cry because it’s not going to make things better. We are working longer hours under stressful conditions,” Solario said. “Kroger and all grocery companies need to provide the protective equipment, testing and essential pay that all of us need so that we can keep our stores operating safely. Our lives are on the line.”

NGA, which represents independent grocers, said it has seen a tremendous response from members to protect and support employees physically and financially since the COVID-19 outbreak.

“Due to their historically close ties to the communities in which they operate, independent supermarkets are uniquely equipped to listen and respond to the individual needs of their associates,” NGA said in a statement Wednesday. “To ensure that our members and their associates are better equipped to contend with the numerous challenges brought on by the pandemic, NGA encourages Congress to pass, and the president to sign, the AG Chain Act, which provides a federal tax holiday and a payroll tax exemption for all essential employees in the food and agriculture industry, as defined by recent Department of Homeland Security guidance. This legislation will provide needed relief to scores of essential frontline employees at independent supermarkets, which are the backbone of communities across the U.S. and provide benefits that go beyond food access, including the jobs they sustain that boost local economies.”

On the safety side, FMI said many supermarkets are asking customers and store associates to wear face coverings and, in areas where masks are mandated by local ordinances, grocers are creating signs or having staff remind guests to wear masks while shopping. Some stores, too, are providing masks for customers who forgot them.

“Refusal to wear a mask while shopping may lead to retailers leveraging a law enforcement non-emergency number in jurisdictions where it is mandatory,” Hatcher said. “We would encourage all shoppers to respect the safety of our associates and other customers by wearing masks and complying with the local and state government requirements, as well as company policies.”

NGA noted that the health and well-being of grocery employees and their customers “is the highest priority for our members.”

“In the unfortunate event that customers would react negatively or violently to being asked to follow guidelines, as determined by the store or state and local government,” NGA said, “independents will work to take any reasonable means necessary to enforce those guidelines for the safety of shoppers and staff.”

Earlier this month, Kroger cited a list of ways it’s supporting and protecting associates during the pandemic. For example, the company said it’s offering testing to associates based on symptoms and medical need and providing emergency leave and paid time off to workers affected by the virus or experiencing symptoms. Other support includes health care coverage and retirement benefits, mental health resources, and aid to workers experiencing financial hardships due to COVID-19.

Kroger said it also is supplying all associates with face masks and encouraging them to stay home if sick, as well as urging customers to wear masks in when in stores or use online services. The company, too, has limited the number of shoppers in stores, installed shields and physical distancing floor decals in stores and expanded contactless payment options.