Wal-Mart Stores is attempting to show “The Real Walmart” to consumers through a national image-building campaign that features testimonials from customers and employees.

Launched early last month, the campaign consists initially of three 30-second spots — being shown on TV and also available in digital versions online — designed to demonstrate how the Bentonville, Ark., company helps customers save money, how it provides career opportunities for associates and how it creates efficiencies to keep prices low.

Each spot ends with the tag line, “That’s the real Walmart.”

According to Bill Simon, president and chief executive officer of Walmart U.S., “We have wanted to do this for a long time because we know people trust Walmart even more when they understand the opportunities we provide our associates, who the customers are that shop with us and how we deliver low price.

“The more we introduce people to what we do and how we do it, the more they understand the positive difference we can make.”

Creating a positive image is important for any company, though as Phil Lempert, an industry consultant, pointed out in a commentary, the ads come “in a time when Wal-Mart has faced criticism over everything from bribery allegations to poor factory conditions, [so] the company is looking for positive and optimistic messages to show it’s still relevant.”

The customer-centric spot features comments from actual shoppers talking about how they are able to invest in other things for themselves and their families with the money the save at Wal-Mart. That spot ends with the tag line, “Living better — that’s the real Walmart.”

In an online text, Wal-Mart provides more complete comments from individuals identified by their first names, who indicate how the money they save enables them to invest in their children’s education, invest in their family business or pay for braces.

For example, a woman named Sonja says, “I do save a lot of money by shopping at Walmart. I would love to be able to travel … teach music or build houses to help people who are less fortunate, and shopping at Walmart helps me save money so I can do those things.”

Another customer, Terrance, said she promised to take her mother to Italy, “[and] shopping at Walmart is helping me save money so I can hold true to my promise.”

According to Wal-Mart, “As the ad demonstrates, there is not one single type of Walmart customer. These customers are economically and ethnically diverse [and] represent the full and vibrant diversity of America.”

The online text also notes that more than 60% of Americans shop at Wal-Mart every month; that Wal-Mart has opened 86 stores in the past two years in neighborhoods with limited access to nutritious produce and donated millions to pounds of food to Feeding America; and that it has committed more than $13 million to support nutrition education. 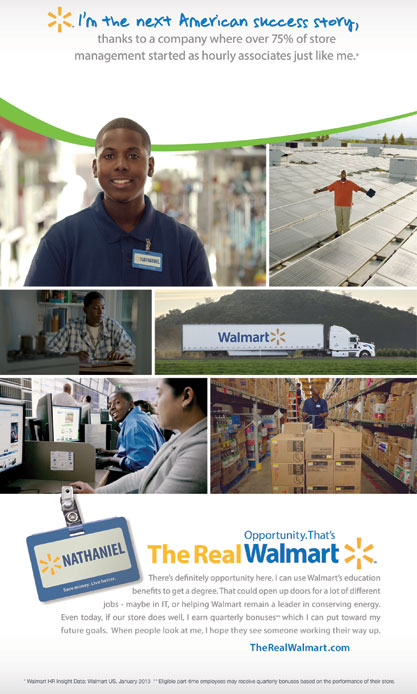 The commercial featuring associates quotes individuals indicating how Wal-Mart has helped provide them with opportunities for higher education and skill training and also how it has allowed them to share in quarterly bonuses when their store does well.

“I’m the next American success story,” says one employee, who points out that more than 75% of store managers started as hourly employees.

The online text notes that Wal-Mart offers every returning veteran a job within 12 months of being honorably discharged; offers health care benefits starting at $17.40 per pay period; offers salaries at or above industry averages; and allows part-time workers to have first shot at full-time openings. It also indicates Wal-Mart has increased the number of female managers by 46% over the past five years.

The third spot, about Wal-Mart’s approach to business, indicates the company is able to deliver low prices by always seeking ways to increase efficiency and cut waste so it can pass the savings on to customers.

Wal-Mart refers to itself in the spot as “an American success story,” noting that it has the world’s most advanced distribution systems and the most efficient trucking network; works directly with manufacturers to eliminate markups; and buys from local farmers in every region of the country.

According to the tag line, “Dedication — that’s the real Walmart.”

The online text says the company has committed to buying an additional $50 billion worth of American goods over the next decade and is encouraging other retailers to do the same. It also says the company is installing solar panels to utilize more renewable energy and changing the materials it uses to make more of them recyclable.