/sites/all/themes/penton_subtheme_supermarketnews/images/logos/footer.png
Recent
Recent
Organic? We’ll see what the USDA has to say about that.
Jan 24, 2023
Retailers were eager to be back together at the 21st annual Friends dinner at FMI
Jan 24, 2023
Amazon launches RxPass
Jan 24, 2023
Opposition to Albertsons-Kroger merger continues
Jan 23, 2023
Boxed lands $20 million in funding
Jan 23, 2023
Featured
Podcast: Foodservice at retail ramps up
Jan 26, 2023
5 things: The rotisserie chicken wars
Jan 20, 2023
Kroger and Albertsons merger: What lies ahead?
Dec 13, 2022
Are we on the verge of a new grocery landscape?
Dec 06, 2022
News

Before any fresh food items get to the shelves at Sam’s Club stores they are first subject to a program of rigorous testing company executives say has raised the level of quality — and sales volumes — at Wal-Mart Stores’ warehouse division. 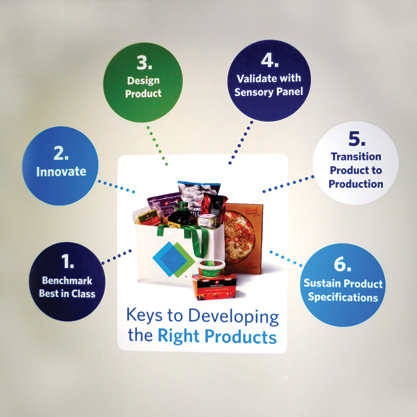 Officials provided media members with a look into the “sensory lab” at Sam’s Club’s headquarters in Bentonville, Ark., as part of its annual shareholders meeting events earlier this month.

“Because we’re the buying agents for our customers it’s important that we provide them with the items that they want at a great value,” Bryant Harris, vice president of fresh grocery for Sam’s Club, said. “A key part to that is the items that they want. Which means we need their feedback to understand what they want from us. We need to understand what attributes that are important to an item and then over-deliver on those attributes.”

The sensory lab accomplishes this through focus group testing of items on a number of attributes that officials demonstrated by inviting journalists to test two desserts it was considering adding to its lineup. Led into a lab, we were seated at a long desk separated from neighbors by dividers and facing a computer screen running a program of survey questions. Desserts — first, a raspberry shortcake, then a chocolate mousse — were delivered by a rotating tray from behind a divider. After each taste — and an encouragement to have water and saltines to cleanse the palate — journalists used the computer program to rate the foods on a 1-10 scale on a variety of measures including taste, appearance and texture.

Sam’s Club goes to this level of detail because its merchants can’t afford a “miss” with limited SKUs in every store, Harris said. The company adopted the process about three years ago, refining similar tests done by Wal-Mart’s United Kingdom supermarket chain Asda, Harris said. The process is meant to introduce a scientific discipline to the subjective matter of taste.

“Everybody’s got an opinion — that’s the food business,” Harris said. “It doesn’t mean that it’s high quality or low quality — it’s your taste buds. But put yourself in a buyer’s shoes who may or may not like something. They have to make a decision for all of our clubs. It’s a very subjective process. What we wanted to do was put some science behind it. How do you get more people involved in the decision making and get more feedback so it’s more objective and scientific?”

Company officials are convinced of its effectiveness, paneling some 1,500 items before 6,500 volunteer tasters per year. While 80% of the products tested met Sam’s minimum standards — today that’s a 7.0 or better on a 10 scale — only 15% actually made it to the club. Scores tend to correlate with sales, Harris said, giving merchants greater confidence and fewer mistakes.

“We don’t settle for just passing — we want the best,” Harris said. “Nationwide 80% of all new products fail. Here it’s just the opposite. If an item goes through this process we have over 80% success rate. I like those odds.”

The process has had additional benefits for Sam’s Club and its suppliers. Suppliers, knowing the rigorous path to the shelf, are pitching the company fewer items, improving efficiency. And Sam’s will share details of its tests with suppliers in exchange for exclusive agreements, supporting  differentiation.

“We view this as a huge competitive advantage,” Harris said.