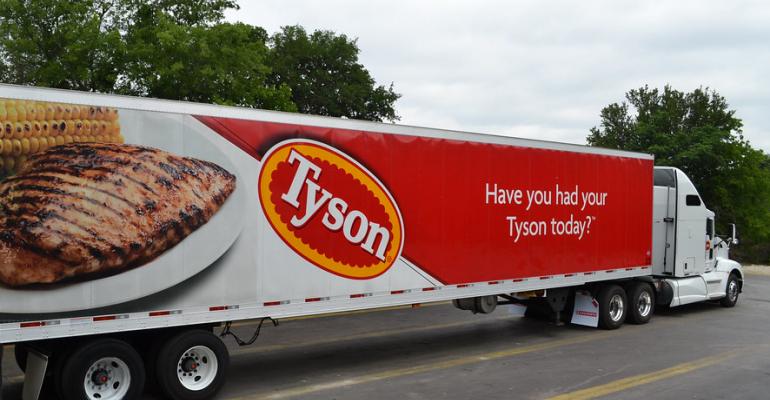 Tyson's other meat and poultry plants currently continue to operate, but some are running at reduced levels of production.
Product Categories>Meat

EDITOR'S NOTE: This story has been updated to reflect the closing of a second Tyson Foods plant on Wednesday, April 23.

Tyson Fresh Meats, the beef and pork subsidiary of Tyson Foods Inc., announced April 22 that it plans to indefinitely suspend operations at its Waterloo, Iowa, pork plant due to the impact of COVID-19. On Wednesday, April 23, the company announced that its Logansport, Ind., facility will voluntarily close while its more than 2,200 team members undergo testing.

The Waterloo facility, which processes approximately 19,500 hogs per day and is the company’s largest pork plant, has been running at reduced levels of production due to worker absenteeism but will stop production midweek until further notice. The facility’s 2,800 team members will be invited to come to the plant later this week for COVID-19 testing.

The Logansport pork processing facility, which produces 3 million pounds of pork daily and helps support more than 250 independent family farmers from across nine states, suspended production for one day on April 20 for additional deep cleaning and sanitizing. Since then, the facility has been running at limited production and is expected to stop production on or before Saturday, April 25.

“Protecting our team members is our top priority and the reason we’ve implemented numerous safety measures during this challenging and unprecedented time,” Tyson Fresh Meats group president Steve Stouffer said. “Despite our continued efforts to keep our people safe while fulfilling our critical role of feeding American families, the combination of worker absenteeism, COVID-19 cases and community concerns has resulted in our decision to stop production.”

Stouffer said the closures have “significant ramifications” beyond the company, since the plants are part of a larger supply chain that includes hundreds of independent farmers, truckers, distributors and customers, including grocers.

“It means the loss of a vital market outlet for farmers and further contributes to the disruption of the nation’s pork supply,” he explained.

Affected team members at both locations will continue to be compensated while the plants are closed. The timing of resumption of operations will depend on a variety of factors, including the outcome of team member testing for COVID-19.

Tyson Foods has been focused on COVID-19 since January, when it formed a company coronavirus task force. It has since implemented numerous measures to protect workers. It was one of the first food companies to start taking workers' temperatures. Tyson started efforts to secure a supply of protective face coverings before the Centers for Disease Control & Prevention recommended them and now requires their use in all facilities. In an effort to promote social distancing, plants like Waterloo and Logansport have installed workstation dividers and are providing more breakroom space.

The company’s other meat and poultry plants currently continue to operate, but some are running at reduced levels of production either due to the planned implementation of additional worker safety precautions or worker absenteeism. The company has suspended production for a day at some locations for additional deep cleaning and sanitization.