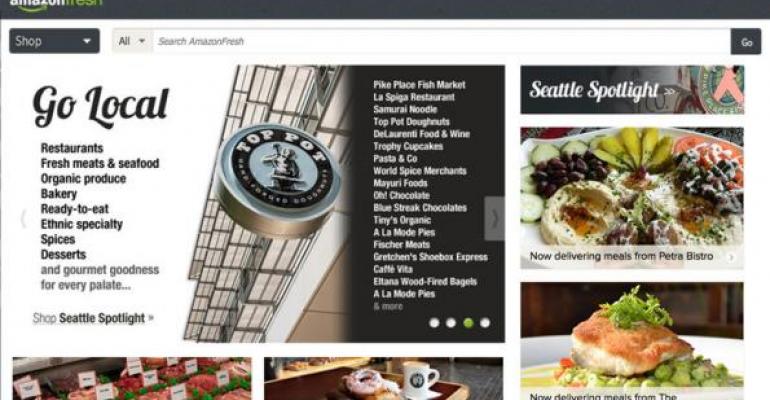 LOS ANGELES — Retailers here may need to be on alert as AmazonFresh begins offering groceries in this marketplace, according to industry observers.

The company has declined comment on widespread reports that it will begin home deliveries of groceries here — nor had it made any announcements as of last week online or in local ads — though observers told SN they spotted AmazonFresh trucks near Los Angeles International Airport early last week.

Reports also surfaced last week that Amazon was considering getting into the bricks-and-mortar business with one store, possibly somewhere in the Austin, Texas, area.

After testing grocery deliveries in its home base of Seattle for six years, the online retailer reportedly is expanding to Los Angeles in advance of a potential rollout to additional markets — as many as 40 markets during the next 18 months, both inside and outside the U.S. — according to some reports.

While Amazon’s impact here may only be minimal at first, “the big challenge is that Amazon is going for an end-game, and that’s the scary part,” one local industry executive, who asked not to be identified, told SN.

“Amazon’s goal is not to make money on groceries but to offer groceries as one piece of a bigger puzzle — same-day delivery for the broader selection of what it sells.

“Amazon has been working on this for years in Seattle, and it’s learned a lot as it’s gradually expanded the program there from one part of the city to another. It may not have had a dramatic impact on that market overall, but as it moves into Southern California, it will initially attract consumers from the middle-income range upward — which will impact more traditional and upscale retailers first — then try to work its way down to other consumers.”

Amazon isn’t pricing at the EDLP level of Wal-Mart Stores, the executive told SN, but “when it gets confident enough to cut prices to EDLP levels and to rely on the other items it can deliver to make money, that’s when the whole world changes.”

One local retailer said he doubts AmazonFresh will have much impact on supermarkets in Los Angeles.

“Amazon is a bit pricey at best, and I don’t think consumers are ready to pay extra for home delivery, especially when the economy and the environment don’t justify it,” he told SN.

According to the local executive, Amazon is doing what mass merchandisers, drug stores and dollar stores have been doing for years — adding groceries to increase frequency of visits.

“Amazon wants the tonnage groceries can provide to ship other products so it doesn’t need to make money on groceries,” he pointed out. “That’s very much like the Wal-Mart model.”

According to an industry consultant, a successful home-delivery business requires a density of population, which is why [email protected] in New Jersey and FreshDirect in New York’s Manhattan do well.  However, he said he doubted AmazonFresh could do as well in Southern California, where the population is very spread out.

“The only way it could make money is to sell books, CDs or other items along with the food it is delivering, and what supermarkets are most concerned about is Amazon’s advanced analytics and predictive merchandising that enable it to make suggestions about additional items customers might buy with food,” he said.

Leslie Hand, research director of IDC Retail Insights, Framingham, Mass., said she believes Amazon is on the right track as it “patiently waits for the customer to come.”

“While many shoppers may still shy away from AmazonFresh in the near term, early adopters have developed a real fondness for saving a couple of hours of shopping tedium at the cost of a small delivery fee. Early adopters were there for Amazon before, and they will prove the model out again in city after city.”

Hand’s advice to grocery retailers is to bridge the physical and digital worlds “[or] the customer will flee when any of your competitors are more flexible, accommodating or proactive.”

“Perhaps this is the time to look for go-to-market partnerships for fulfillment and logistics.”