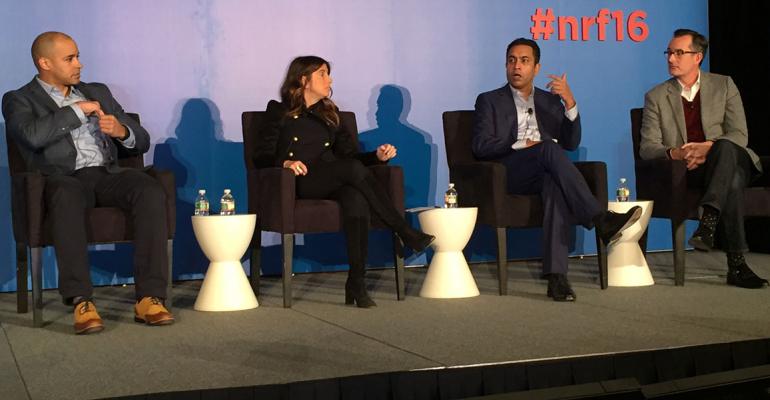 FreshDirect is focused on making the consumer experience more relevant across multiple devices, from mobile to desktop, according to Jodi Kahn, chief consumer officer of the New York-based online retailer.

In a panel in New York during Retail’s Big Show 2016 from National Retail Federation, Kahn used the impending Northeast snowstorm as an example of the retailer’s thinking on multi-device strategies.

“Let’s say snow is coming,” she said. “We don’t know exactly which day. We need to figure out when’s the last time we can market this week. Are we going to need to shut down?  We know people are panicked and they want their food. So we have to figure out where they are at that moment. Do we need to give a snow message on their mobile devices? And then coordinate it with what’s on the desktop? We really try to be careful about knowing our customers and how they are using each device.”

She pointed to usage patterns by devices throughout the week and how there are predictable shifts.

“For us mobile is highly transactional and it’s where people buy on Saturdays and Sundays,” she said. “During the week people on desktops are usually at work. So we really need to understand that context in how we are competing for their attention and shopping dollars.”

She emphasized that “the multi-device experience is really important for us,” and also includes thinking about where consumers want to see recipes.

As reported by SN, this week Fresh Direct launched a new initiative called FoodKick, which is an app that offers curated foodie selections and one-hour delivery.

Another panelist, Michael Haswell, director of product partnerships at Google Commerce, cited shifting patterns of mobile usage that are raising the stakes for marketers.

“Competition is intensifying,” he emphasized. “We’ve seen in the past year mobile session lengths decline 7% and transactions up 65%. So these are micro-moments, you’ve got that moment to capture the consumer’s attention. The consumer now lives online so this is an extension of the individual.”