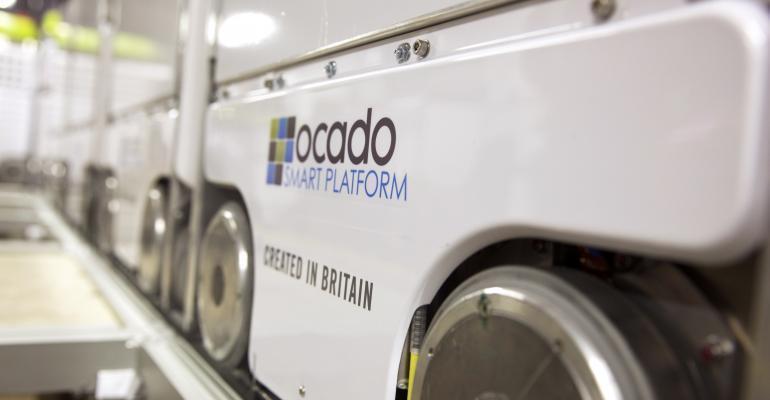 Kroger/Ocado
Kroger has not yet specified the location of the new CFC planned for the South but said construction is due to begin in 2021.
News>Online Retail

The Kroger Co. has named the South as a new region for an Ocado customer fulfillment center (CFC) to fill online grocery orders.

Kroger has not yet specified the location of the new facility, which will measure 200,000 square feet, but said construction is slated to begin in 2021. The Cincinnati-based supermarket giant said it’s also working with Ocado to roll out in-store fulfillment technology across Kroger stores starting next year.

Plans call for Kroger’s first Ocado CFC to open in Monroe, Ohio, in early 2021. Most recently, in late September, Kroger identified Romulus, Mich., as a CFC site, one of three new Ocado facilities that had been announced for the Great Lakes, Pacific Northwest and West. So far, Kroger hasn’t named the locations of the other two sites.

“Kroger continues to accelerate the expansion of our national network to redefine the customer experience,” Gabriel Arreaga, chief supply chain officer at Cincinnati-based Kroger, said in a statement. “Our partnership with Ocado is and will continue to be rooted in our ability to deliver a value-added customer-centric solution that brings fresh food to customers through our seamless ecosystem.”

When unveiling their partnership in May 2018, Kroger and United Kingdom-based Ocado said they plan to open 20s CFCs in the United States over the next three years. The Ocado CFCs use automation and artificial intelligence (AI) to service online grocery orders, as well as to expand the footprint for Kroger products.

“In the long term, we know that winning online in grocery means having the best customer service, underpinned by the best operational economics,” commented Luke Jensen, CEO of Ocado Solutions, which has its U.S. headquarters in Tyson, Va. “In leveraging the wide range of Ocado fulfillment technologies, Kroger is accessing the best customer offering for online grocery in the world, proven in the U.K., one of most developed and competitive markets for grocery online.”

“Kroger continues to accelerate the development and rollout of customer-centric technology and digital capabilities to build a seamless ecosystem that combines the best of the physical store experience with the digital experience,” according to Yael Cosset, chief technology and digital officer at Kroger. “Ocado’s in-store fulfillment capabilities, leveraging AI, will further contribute to continuous improvement of the customer pickup experience.”

Kroger hasn’t specified opening timetables for the CFCs in Romulus, Frederick, the South, West and Pacific Northwest. The Monroe, Groveland and Forest Park CFCs are expected to go into operation in 2021 — with Monroe and Groveland due to open early next year — and the Dallas and Pleasant Prairie facilities are slated to be up and running in 2022.