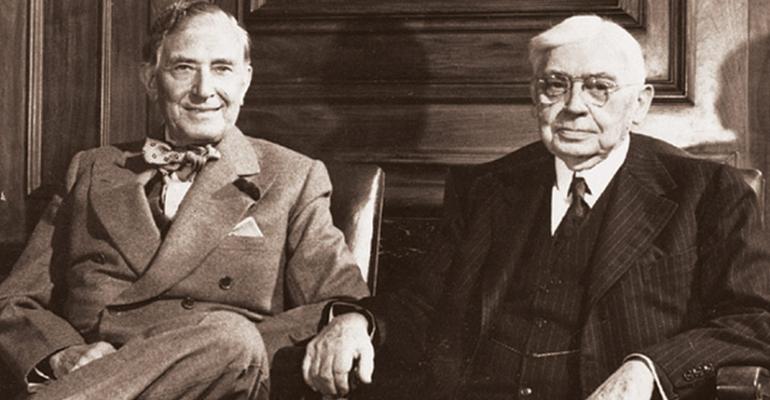 <p>John and George Hartford, sons of the founder of A&amp;P, spearheaded the national growth of the chain.</p>
News

The Hartford brothers of A&amp;P changed how the country shopped &mdash; and ate

George and John Hartford weren’t founders of A&P, but before they were through they had twice built the company into the world’s largest retailer and along the way transformed not only the food retailing industry but American business in general.

Influential, and at times controversial, A&P under the Hartford brothers through the first half of the 20th century developed enduring standards and practices that changed the way the country shopped and ate — and just might outlive the very banner associated with their name.

The sons of A&P co-founder George Huntington Hartford, George Ludlum and John Augustine Hartford — who would come to be known respectively as “Mr. George” and “Mr. John”— joined A&P during the 1880s and served into the 1950s. Neither had a college education or another employer all their lives. Historians say it was their varied and complementary skills that set them apart and allowed them to reach previously unheard-of heights together.

A&P was still quite young but already a growing phenomenon when George Hartford began working as a 15-year-old cashier in a New York store in 1881. Often described as shy, reserved, frumpy and analytical, George would be joined in the family business by his dashing and gregarious younger brother John in 1988. John’s talents for merchandising and operations would match his brother’s interest in finance and processes as A&P experienced explosive growth in the years to come.

A 1950 cover story in Time magazine reflected on the brothers’ striking differences.

“‘If I were asked to name the two men who seemed least likely to agree on anything,’ said an A&P associate, ‘I’d pick John and George Hartford,’” the article stated. “Both brothers are widowers; both live only for the A&P. But there the similarity ends. John is thin, George is plump. John is bold and expansive, George cautious and conservative. John is gregarious and full of quips, George shy and sobersided. John stands and talks; George sits and listens.”

As relayed in a family history published by the Hartford Family Foundation in 2002, A&P’s beginnings as a vertically integrated retailer can be traced to George’s accounting interest. Concerned that baking powder was so expensive to buy and sell, George learned how it was made, then hired a chemist to manufacture baking powder at the company’s Vescey Street location in Manhattan, allowing the company to sell the stuff for a fraction of the going price. This advance, in the late 1880s, marked A&P’s first private-label product and the birth of the company as a manufacturer of what it sold.

In the years to come, A&P would tackle one industry after another as it found ways to introduce efficiency and lower prices in grocery through vertical integration. This practice would prove to be rough on existing retailers and manufacturers but it revolutionized retail. Until A&P came along, consumers commonly paid more for their food than they did for rent or mortgage, according to Marc Levinson, writing in his book, “The Great A&P and the Struggle for Small Business in America.”

“Although shifts in the way the world buys food are far less heralded than innovations such as cars or computers, few economic changes have mattered more to the average family,” Levinson wrote. “Thanks to management techniques the Great A&P brought into widespread use, food shopping, once a heavy burden, became a minor concern for all but the poorest households as grocery operators increased productivity and squeezed out costs.”

With George Hartford keeping an eye on the books and profits, his brother John took the lead on merchandising. He pioneered creative advertising techniques including sponsoring popular radio programs and launching a national magazine, Women’s Day, which at one time was available exclusively at A&P stores. His belief that shoppers would ultimately respond to the merchant with the lowest prices led to the introduction of A&P’s Economy Store beginning 1912.

This format — which eschewed the then-common practice of offering coupons for premium items like china and glassware to draw business — instead used limited assortment and limited service to support market-leading prices. This innovation fueled a second explosion in retail sites that by its 1930 peak had grown to more than 15,000 A&P stores from coast to coast and more than $1 billion in annual sales.

A&P stayed on top through continual innovations. In the 1920s the company integrated produce and meat in its grocery stores, being among the first grocery retailers to accomplish that. In the 1930s, it established a massive bakery division. Its exclusive brands like Ann Page, Jane Parker and Eight O’Clock coffee were the biggest in their categories.

A&P became so dominant under the Hartford leadership that it took federal intervention to slow it down. In 1946, the company was found to have violated the Sherman Antitrust Act by using its produce division both as a buyer for A&P and as a selling agent for growers.

A&P’s ultimate downfall would relate to a slow response to larger societal trends — chiefly, America’s flight to the suburbs and the rise of television bringing branded goods into new prominence — many of which gained steam following the death of John Hartford in 1951 and of George Hartford in 1957. However, aspects of their business plan have endured to the modern age: Sam Walton in 1950s took the message of low pricing to heart in a new discount store he called Wal-Mart. And the supermarket industry is in the midst of a long-term trend back toward many aspects of the business the Hartfords would recognize: private brands, smaller stores close to customers, and buying goods direct from farmers.

Much of the fortune amassed by the Hartfords during their years at A&P established a charitable foundation that thrives today as the John A. Hartford Foundation, a leading supporter of improving health care for the elderly.