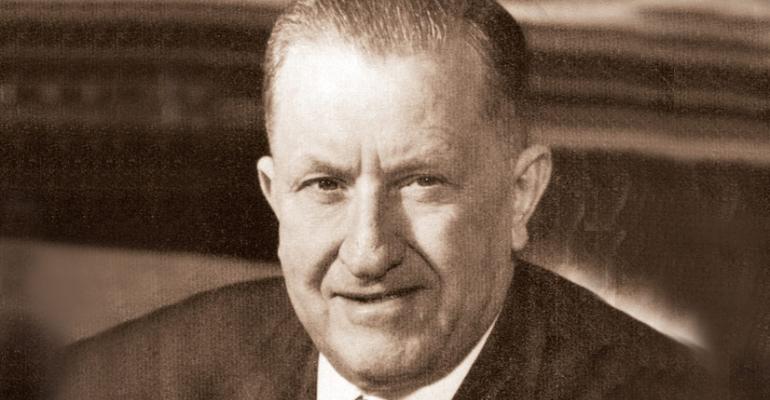 <p>J. Frank Grimes &ldquo;saw that there needed to be some kind of program for the independent family-owned businesses.&quot;</p>
News

J. Frank Grimes believed in entrepreneurialism in the grocery industry — but that doesn’t mean he believed that independent store owners needed to stand alone.

The founder of IGA had a vision for a national network of independently owned stores that could compete with the large, fast-growing chains of the time, and he succeeded in creating it.

As Thomas Haggai, the former longtime chief executive officer of IGA, pointed out, however, Grimes was not out to defeat the chains — his goal was simply to create a vehicle that allowed family-owned, independent grocers to succeed.

“He organized it not to fight the chains — he just felt family business ought to be able to survive,” Haggai told SN. “He felt that with the way the business climate was in the United States, that family businesses would always have a strong opportunity.”

As a partner in a Chicago accounting firm, W.W. Thompson & Co., which handled some grocery distributor accounts, Grimes was familiar with the economics of grocery wholesaling. This led him to the conclusion that small, independent grocery-store operators would need a new business model if they were going to compete against the fast-growing chains like A&P, National Tea and Piggly Wiggly.

“He saw that there needed to be some kind of program for the independent family-owned businesses, because they were not going to survive just by being wonderful, independent families,” Haggai explained.

Grimes envisioned a voluntary grocery organization that would leverage strength in numbers through collective advertising and volume purchasing, according to an account in the 80th anniversary edition of IGA’s Grocergram publication.

He gained the support first of the food manufacturers — many of which were based in Chicago, where IGA remains headquartered to this day— before presenting the idea to retailers in a meeting in May 1926, in Poughkeepsie, N.Y., where the first independent grocers signed up to the program. According to the Grocergram report, Gene Flack, a public relations executive who accompanied Grimes on his train ride east, came up with the idea to call the new network an “alliance,” forming the full name of the Independent Grocers Alliance, or IGA.

“It is an alliance — between the stores, the wholesalers and the vendors — and on the top of the three-legged stool is the IGA brand, and it is owned by the consumer,” said Mark Batenic, the current CEO of IGA.

In two days of meetings in Poughkeepsie and in Sharon, Conn., Grimes enlisted 93 independent operators.

The banner quickly spread throughout the East and into the Midwest, and even thrived during the Great Depression, thanks to the evangelical zeal of Grimes and his team, and the belief among grocers in a business model that promoted entrepreneurship.

In a 1929 speech, Grimes addressed retailers with a rousing speech that exemplified his leadership and zeal — and also reflected his belief in the power of entrepreneurs to play a vital role in the economy.

“Great businesses are drawing in and becoming fearful, and adding to the unrest and unemployment,” he was quoted as saying. “Right at this time, the opportunity is golden for men to go out and do business courageously, with determination, and prove that America is not dead yet. That there are men thinking and unafraid.”

By the end of 1930, the Grocergram reported, IGA had expanded to 10,000 stores in 37 states. Stores were small by today’s standards, but in line with what the major chains like A&P and Kroger were operating.

The business structure of IGA was unique. Approved IGA wholesalers paid a fee to IGA based on their sales volume, and they also paid for IGA store operator training and merchandising. Retailers paid no initiation fee to join — but contributed $3.50 per month to their wholesaler for advertising and $10 per year to IGA for the headquarters operation.

At first, IGA itself was serving as a wholesaler, but within a few years it had enlisted dozens of wholesalers around the country to deliver product to its stores.

IGA also quickly developed its own private-label product line and established a national marketing platform. In fact, marketing became one of the cornerstones of IGA’s success, with sponsored radio programs such as “IGA Hometown Hour,” “One Girl in a Million” and “Meet the Family.” Celebrities including baseball star Babe Ruth and boxer Jack Dempsey became IGA endorsers.

IGA continued to evolve with the times, testing new store designs as the corner grocery stores that dotted the country evolved and were replaced by modern supermarkets following World War II and a shift to suburban living.

Although Grimes had envisioned expanding IGA globally, and had some conversations with operators in China and Japan as early as 1931, the brand did not become truly global until long after Grimes left the company.

Grimes retired in 1951 and was succeeded by his son, Don, who led IGA for the next 15 years.

Batenic said IGA today embraces many of the same values espoused by J. Frank Grimes in his early years with the company.

“He had the vision of being global with a local focus, and that’s what we are today. Not a week goes by that we don’t hear from somebody that wants to know more about IGA, and that’s because of what we stand for and our principles.

“Our principles remain the same, but our practices change to suit the times.”

“I’m sure Mr. Grimes never thought of the Internet or digital media, but I think he’d be thrilled to know that this brand is adapting to that through our IGA digital marketing program for retailers called IGALink, and through our aggregated purchasing program called Performance Insights, which we have initiated just this year for our retailers.”

IGALink is a turnkey digital marketing platform for IGA members, who can leverage it for a variety of marketing functions.

The Performance Insights program allows participating retailers to promote monthly “Hometown Proud” value-added shopper offers from the industry’s premier manufacturers, and be reimbursed based on their sales performance.

Even the “Hometown” is a part of Grimes’ legacy, Haggai explained, noting that the term has long been a part of IGA’s marketing  messages.

Close connections to the community have also long been an integral part of the IGA operations, Batenic explained.

“When you are a family business, it also involves the community,” he said, citing efforts like IGA’s support of the Wounded Warrior Project.