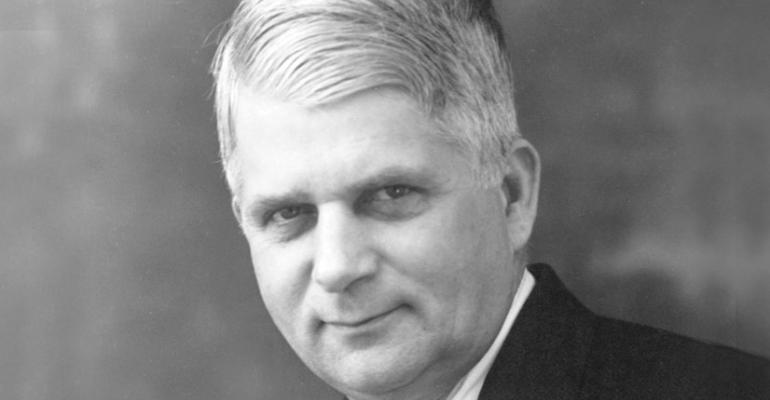 <p>Clarence Saunders is credited with inventing a model for self-service grocery retailing.</p>
News

Clarence Saunders’ star turn in the supermarket industry limelight was brief, but the founder of Piggly Wiggly left a lasting legacy.

In the six years that he operated his chain of self-service grocery stores in Memphis, Tenn., from 1916 to 1922, Saunders arguably did as much to shape the modern food-retailing industry as anyone before or since.

His self-service, cash-and-carry stores introduced new efficiencies that revolutionized grocery-store operations, and some of his many patented inventions — the machine-printed receipt, for example — remain the standard for the way retail business is conducted.

Before Saunders opened the first Piggly Wiggly store in Memphis in 1916, he had worked as a wholesale salesman and “was kind of a student of the retail business — an unofficial efficiency expert,” said Mike Freeman, author of a 2011 book called “Clarence Saunders & the Founding of Piggly Wiggly — The Rise & Fall of a Memphis Maverick.”

In an interview with SN, Freeman explained that Saunders’ goal in creating a self-service grocery store was to drive costs down to be able to lower prices, and his many innovations in design and other areas enabled him to do just that.

Grocery stores in the pre-Piggly Wiggly days were staffed by clerks who fetched orders from behind a counter for their customers, but these clerks were often idle when business was slow, and became too busy to provide adequate and prompt service when traffic picked up in the stores.

“He just saw it as a very inefficient operation,” Freeman said. “Piggly Wiggly came from those observations — he thought he could set up a retail store and have people pick out their own merchandise, with maybe three employees.”

Saunders also appeared to borrow some ideas from the Bowers chain of stores that already existed in Memphis, Freeman said. But he clearly invested a lot of planning into his first locations, which were still innovative on many levels.

In addition to requiring shoppers to select their own items from the shelves, the stores also featured a “continuous aisle” layout that snaked back and forth from the front of the store to the back and forced shoppers to walk past every item. Customers entered and exited through turnstiles, and they had to pay for their basket when the left the store, rather than running a line of credit.

Those aspects of Saunders’ operation all contributed to driving the efficiency of the business, explained Louella Weaver, manager of the collections department at the Memphis Pink Palace Family of Museums, where a re-creation of the first Piggly Wiggly store is on display.

“You had to walk past every item. Before that, shoppers were separated from the merchandise,” she explained. “Impulse buying was sort of born there.”

She also noted that requiring customers to pay for the orders as they exited also cut down on the need to chase down customers who ran into debt buying their groceries on credit.

Legend has it that the name “Piggly Wiggly” came from Saunders’ observation of squirming piglets — which may have reminded Saunders of customers at a grocery store struggling for the attention of clerks, Freeman said — although it is not clear if that is the true origin.

In addition to the format innovations pioneered by Saunders, his marketing approach also was unique. He staged an elaborate grand opening for the first store that involved a beauty contest, complete with a movie crew to film it.

Saunders’ newspaper ads also were unusual — he used them to tell short fables about grocery shopping in which the “moral” of the story was that Piggly Wiggly was a better alternative than its rival retailers, Freeman explained.

In addition to the cost savings of shopping at Piggly Wiggly, there also were time savings involved, presumably because shoppers no longer had to wait for service or for a clerk to assemble their order. The first store opened at a time when the automobile was rapidly gaining in popularity, and speed became a more prominent part of everyday living.

“He was a little ahead of his time,” Freeman said. “Somehow he knew that things were moving toward faster service, and faster transactions.”

According to a history of Piggly Wiggly on its website, the early stores were the first to provide checkout stands, the first to price-mark every item in the store (using paper tags on hooks), the first to take a high volume/low margin approach to food retailing, the first to use refrigerated cases for produce, and the first to have employees wear uniforms, among other “firsts.”

Saunders soon began franchising his self-service concept — another first, according to Piggly Wiggly — which expanded the banner rapidly. By 1921, at the five-year anniversary of the first store, Saunders owned or licensed 615 stores in 40 states, with annual sales of more than $30 million, according to Freeman.

The store count doubled over the following two years, but Saunders lost control of the company in a stock-market fiasco.

The self-service model had taken hold, however, and was copied by other operators around the country. The Piggly Wiggly name itself changed hands several times before landing with its current owner, C&S Wholesale Grocers.

Piggly Wiggly was not the end of Saunders’ adventures in food retailing, however. He went on to open other innovative formats, including a failed concept called Keedoozle, which operated like a giant, automated vending machine. Products were selected from behind glass cases and dispensed automatically.

Saunders was always “a lone wolf” in his business ventures, Freeman told SN.

“He wanted investors, but he didn’t want to be told what to do. He wanted silent partners,” Freeman said. “He never worked well in a corporate environment. He wanted partners who were working for him, not with him.”