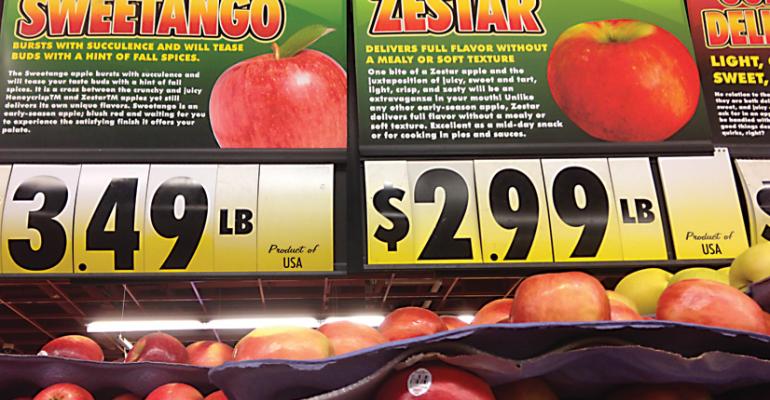 <p> A produce consultant advises retailers to create a &ldquo;department within the department&rdquo; to showcase new or unusual items.</p>

&ldquo;A lot of vendors have seen the value of having unique display vehicles for the product. So any time you can kind of have a unique display vehicle for it, it&rsquo;s a chance to kind of put that out on its own and really call attention to it.&quot; &mdash; Steve Wright, director of produce and floral, Tops

Cotton Candy Grapes, seedless green grapes bred to taste like the carnival treat, sparked strong consumer interest at retailers that were able to stock them this summer.

“They turned out to be a great item for us,” said Tom Murray, vice president of produce at Wellesley Hills, Mass.-based Roche Bros. Supermarkets.

While introducing new produce varieties can boost the department’s image, such items must be merchandised and marketed well to entice consumers, said retailers and industry experts.

Grapes, apples and tomatoes have seen many new varieties in recent years, according to Steve Wright, director of produce and floral at Williamsville, N.Y.-based Tops Friendly Markets.

“Since the success of the Honeycrisp [apple] everybody’s trying to find what that next big thing is, and that’s been a category that certainly has got a lot of new items in it,” said Wright.

Items like Sweet Celebration grapes as well as Amaize Sweet Corn have done well at Tops.

The 153-store retailer positions new, unique produce in a “hot spot” at the front of the store, said Wright. He also encourages individual stores to demo products.

“Sampling programs tend to be very difficult to pull off in a large degree. You can’t just say, well I’m going to do 160 stores and we’re going to have demo people. It doesn’t work that well,” said Wright.

“And it’s funny, we did that specifically in three stores and the numbers were tenfold better than normal by doing that. So it was kind of a lesson learned as far as walking around and talking to the customers, interacting with the customers,” Murray said.

Murray noted that new products that weren’t demoed or promoted in stores didn’t perform as well.

Retailers need to give new produce items enough space in the department in order for those items to be successful, and accept that there will be higher shrink than traditional products, Gray pointed out.

She suggested retailers create a “department within the department” to showcase new or unusual items that aren’t marketed solely on price.

Suppliers should also assist retailers with marketing and merchandising if they want their new items to sell, Gray said.

Producers can provide interesting displays or packaging to help retailers inform customers and employees about the new varieties.

Roche Bros. calls attention to new products by placing them in what it calls “Fresh First” displays in the produce department.

If there’s enough volume, the retailer will also put the item in the weekly ad as a “pick of the week,” Murray said.

“And we kind of explain the item to the customer with a short, maybe one- or two-sentence description underneath and ‘try something new’ and all that stuff, because people love to try something new.”

The rise of social media has given retailers another vehicle to grow enthusiasm for new produce and educate consumers.

Also on Facebook, Earth Fare posted a picture of a different type of apple with its name, flavor and selling season every day for two weeks at the start of the fall harvest.

While taste certainly played a role, part of the appeal of Cotton Candy Grapes was its short season and limited availability.

“I mean, it’s classic marketing. It’s scarcity. It’s trying to create a sense of, ‘you better get it now,’” said Gray. “I think of like Honeycrisp, which was sort of the rock star of specialty apples, it was that scarcity that created the demand.”

That merchandising strategy used to exist naturally in the produce department, but the global supply chain that makes blueberries and peaches available year-round has curtailed consumers’ anticipation of produce availability.

“It lost that, ooh it’s peach season or it’s blueberry season. We’ve lost that. So now we have to recreate that somewhere else. And I think that the new varieties, if you view it under that lens, can do that, can create some of that scarcity, urgency, excitement that used to exist naturally in produce,” said Gray.

New produce, particularly items with limited runs, is a way to “create excitement within the produce department, even if your go-to market strategy is generally around price, price, price,” said Gray.

While that may be the case, some retailers will use discounts to get customers to try a new product.

“If you’ve got like an apple and it’s really the same price as all the other apples, I’m going to be more willing to try it than I am if it’s like a dollar more,” said Wright.

At the same time, Wright said customers responded to the Sweet Celebration grapes despite the fact that they were more expensive.

“We gave it a try. Is this really going to be worth eight, ten dollars a box more than what a typical red grape is? Are our consumers going to get that? Are they going to understand that? And in that case, yeah, they got it,” said Wright, noting customers observed the grapes were twice the size of traditional grapes.

Although such successes are important for Tops, ultimately offering new produce items isn’t just about a strong sales performance.

On top of working to promote consumption with new items, Wright noted that having these new offerings builds the retailer’s reputation.

“A lot of ‘new’ just speaks toward image. When customers really know that you’re a destination where they can get what they want — they can get more than what they want. They can get some different things that they’ve never seen anywhere before. That’s an image thing that you really can’t put a dollar sign to.”

WILLIAMSVILLE, N.Y. — Once a quarter, Tops Friendly Markets partners with specialty produce supplier Frieda’s Inc. to teach customers about some of the unusual varieties on offer.

“Really talking about persimmons and jicama root and the purple sweet potatoes and all the different things of that nature. Things that people normally wouldn’t try,” said Steve Wright, director of produce and floral.

To prepare for customers’ questions, Frieda’s runs a webinar to train Tops’ employees.

“The worst thing you want to do is pass out a bunch of stuff and have your teams not know what in the world it is,” said Wright.

The supplier also helps with signage and social media.

In addition, Tops holds a contest with a cash prize to see which store has the best Frieda’s display. The retailer takes into account creativity as well as what the store did last year when determining a winner.

“So it’s not the biggest store that’s going to win. It’s the guy who really got behind the program and said, you know, guess what, I’m going to do a better job with jicama root this year. What’s this purple sweet potato? Let’s get behind this and get the customers to try it out,” said Wright.