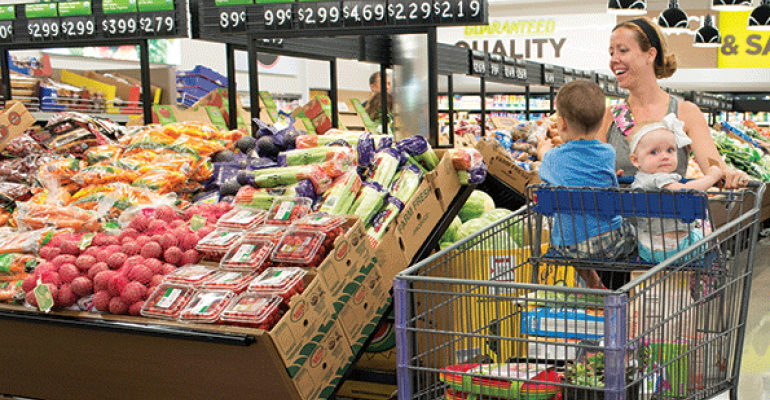 Discount Redefined: Aldi in the USA

Changing in step with customers and determined for volume and unit growth, Aldi is SN's 2015 Retail Achievement Award winner

Aldi will never be everything to everyone, but more things for more people is certainly within its sites.

The limited assortment discounter, which at one time provided only a bare-bones shopping experience for the neediest shoppers, has today evolved its concept so as to provide a contemporary look and on-trend assortment with appeal to what Aldi calls “smart shoppers” — increasingly, mainstream grocery shoppers who will buy all they can at Aldi before filling out the rest of their needs elsewhere. 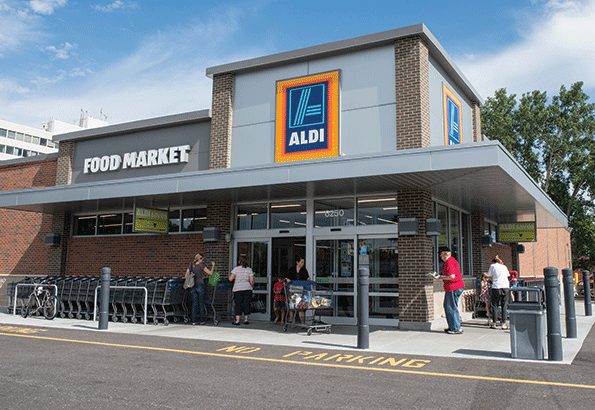 SN’s Retail Achievement Award recognizes an outstanding  accomplishment by a retailer that boosts its business and serves as an example to the wider industry. Aldi is this year’s recipient, based on its success expanding its range and its reach.

This reinvention of the discount model has made Aldi — even with the relatively low volumes that come with its limited assortment — a considerable threat to larger players who trade on price, like Wal-Mart Stores, and to mainstream grocers whose selections have been skillfully targeted, observers say.

“Over the last 15 years Aldi has gone from attracting that income-constrained customer who needed to shop for the lowest-priced groceries, and evolved so that stores are more pleasant, more open and brighter. They’ve evolved merchandise assortments to be more trend-right. And that’s widened the customer base from people who need to save money, to more of a smart shopper who wants to save money,” Neil Stern, managing partner at McMillanDoolittle, told SN in an interview. “That’s broadened Aldi’s customer base and been a very good thing for them.”

At the same time, Aldi is taking this more appealing offering to more places than ever before. It’s about a year-and-a-half into a $3 billion, five-year expansion spree that will add more than 650 new stores by 2018, taking the Batavia, Ill.-based retailer to around 2,000 locations, including its first foray to the West Coast with the anticipated opening of 45 stores in Southern California next year.

For its ambition to change with its consumers while finding more of them, Aldi is the recipient of SN’s 2015 Retail Achievement Award, sponsored by Hussmann.

In an exclusive interview with SN, Jason Hart, Aldi’s youthful CEO, said the increase in store traffic that came to Aldi with the onset of the recession in 2008 has proven resilient, even as economic clouds lifted. Aldi in the meantime has continued to pivot its assortment to appeal to that shopper, crafting private brand selections around gluten-free (Live g-Free); “free-from” pure foods (Simply Nature); premium specialty (Specially Selected); and better-for-you items (Fit & Active), along with increased selections of fresh foods including a rollout of organic produce in all stores last year.

“We’ve been quite happy with the stickiness of the traffic that’s been coming into the stores in the past few years,” Hart said. “When you think about it, that customer who came into our store to save a little money because her economic situation became more difficult, once their situation improved — let’s say she found a new a job — that person doesn’t say to themselves, ‘Great, now I can go back to a traditional supermarket and pay $2 more for the box of branded cereal that tastes the same as the Aldi cereal.’” 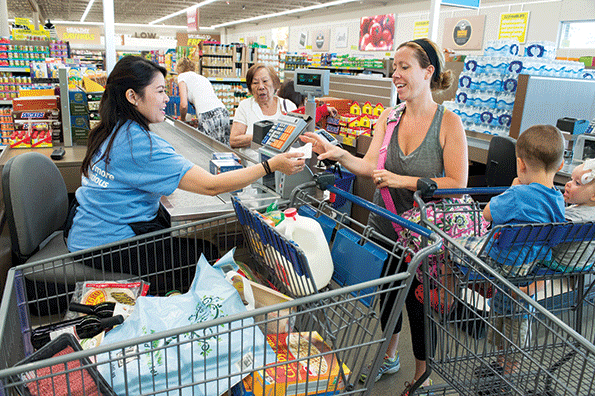 Aldi is reinventing the discount store behind a philosophy that saving money favors no one demographic.

Although Hart declined to cite specific financial results, he said the chain’s appetite for expansion is up because sales are up, and sales are up because more shoppers are doing more of their shopping at Aldi — around 30 million shoppers per month, Hart noted. According to SN’s Top 75 estimates, the chain wrung sales of $10.1 billion out of 1,215 stores in 2014. A rough estimate of those figures suggests the average Aldi store does sales of around $150,000 per week, with shoppers spending in excess of $53 per visit.

Aldi’s five-year expansion plan estimates it can increase customers served per month to 45 million — a 50% increase from the current 30-million level — on a store-count increase of around 43%, another indication of the chain’s ambition to grow sales volumes faster than it grows stores. 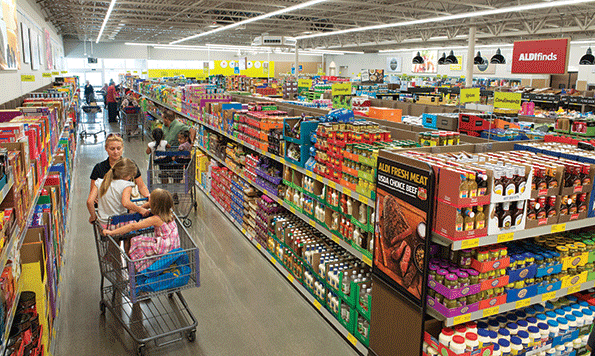 Aldi has beefed up the selection and size of its stores, with eyes on bigger baskets and more frequent shoppers. 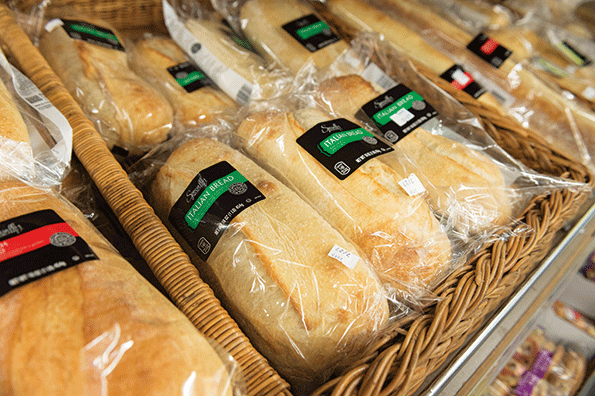 Aldi limits its selection to around 1,350 SKUs but has chosen them effectively so as to be the “first shop” for its customers.

Aldi is doing so on a small increase in both the number of SKUs — it carries around 1,350 currently — and also, a tick up in the size of the box. Hart said Aldi today is seeking stores of 11,000 square feet, up from a previous prototype of 10,000, acknowledging the company has at times wrestled with balancing the ideal assortment with the easy customer shopping experience and cost advantages a smaller box provides.

“We try to stay disciplined to keeping a limited range, a focused range of products in the store but I will say that number’s been growing, and we believe that business model works for us, and the growth in shoppers is a testament to that,” Hart said. “Our shoppers tell us they appreciate how our product selection makes for a real quick and easy shopping experience and an environment without the dozens of aisles they have to go through in other stores and the dozens of selections for what would be just one SKU in our store.” 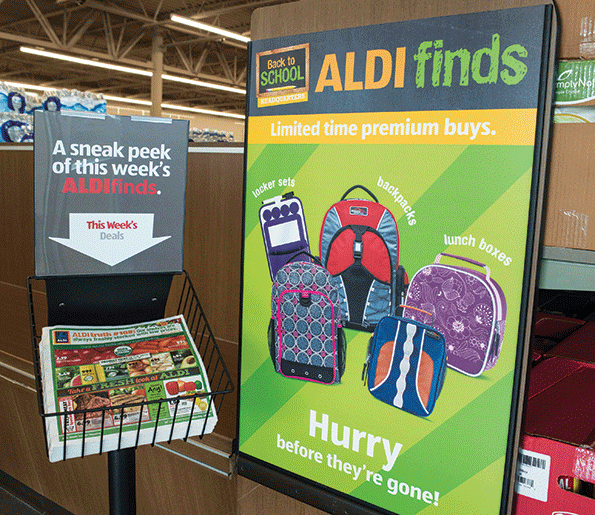 The tight selection, simple layout and cost discipline of Aldi stores fuel its price advantages and have proven a difficult model both to copy and to combat. To name one recent example, after Delhaize pulled the plug on its money-losing Bottom Dollar Food concept — selling the majority of its locations to Aldi — CEO Frans Muller told SN the larger company simply didn’t have discounting in its DNA, despite years of trying.

“I can’t speak to why the strategies of other companies might not have worked. All I can say is what works for us,” Hart said. “You have to be disciplined to the concept. It’s a testament to how well the Aldi concept has worked because of how disciplined we’ve stayed to it. We can’t be all things to all people but our disciplined concept of retailing results in an unmatched formula of low prices, high quality, simplicity and product selection.

“When I say we’re disciplined to the concept it certainly doesn’t mean we’re a static business either,” he added. “We’ve always taken a simple, cost-effective approach to grocery shopping that fundamentally saves shoppers at the checkout. But we’ve also evolved in other ways during nearly 40 years in the U.S. We’ve developed new product lines, added more fresh options, and the store and the shopping experience have evolved over the years.”

'Nibble away' at sales

For competitors, a single Aldi opening is little more than a glancing blow, but one that’s difficult to defend against, sources say. In numbers, Aldi stores tend to “nibble away” at a sales base.

“It’s hard to mitigate the impact of Aldi because they’re so good at what they do,” Stern said. “There is only so much you can do as a traditional supermarket operator. They’re going to get their share. Inevitable is a strong word, but retailers need to be accepting that that’s going to happen.” 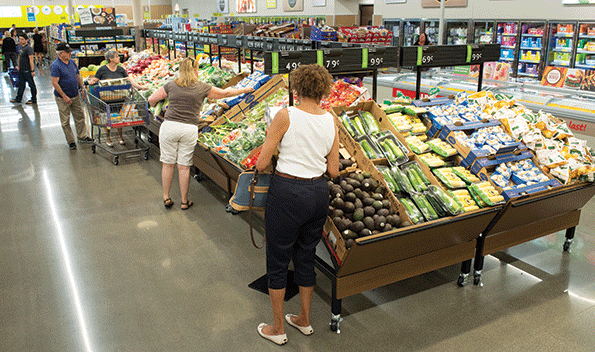 Aldi officials maintain quality is the differentiator between it and competitors in the discount space.

Stern said some stores have found success in promoting an opening price-point private label offering but lacking Aldi’s cost structure, its prices are difficult to reach.

A retailer who asked not to be identified told SN traditional supermarkets are better off competing on their own terms and not Aldi’s.

“I don’t think they’ll take them on head-on,” the observer said. “Most supermarkets already have sharp pricing on things like milk, bread and eggs. The other thing they have to do is make sure they have a reasonable selection of other sizes that will allow them to get to the correct price points. Because let’s face it: If they’re buying from Kraft, they’re not going to out-mac-and-cheese Aldi. But if they offer bundles, or a deal like if you buy five you get $5 off, or if they bring in different sizes to get to the right price point by perception, that’s how they have to fight them.”

Meanwhile, the U.S. landscape is seeing the proliferation of additional value-based food retailers. Supervalu’s Save-A-Lot is riding strong sales momentum and eyeing a potential spinoff as a publicly traded company so as to fuel its own expansion. Companies like Grocery Outlet and WinCo are also expanding, as are dollar stores with a considerable food offering like Dollar General. On the horizon is Lidl, Aldi’s fellow German-based rival. Those two, which have battled for years in Europe — and between them have dealt a serious blow to conventional supermarket chains there — are expected to begin fighting on a new front shortly when Lidl opens the first of what’s expected to be at least 100 stores on the U.S. East Coast.

Will the proliferation of price-focused competitors wear away at Aldi’s uniqueness? Hart says no.

“Our dedication to the product quality will always be our main point of differentiation,” he maintained. “Anybody can offer a great price on a product. Whether that product is any good, or whether they can sustain that price, is the question. We offer a great price every day on every product in our store and we stand behind the quality, through in-house taste testing and sampling in our Aldi test kitchen. The quality is what differentiates us.”

Stepping up that quality offering through specialty private labels has accompanied a move toward the larger stores in more desirable locations, Hart noted. Aldi’s newest stores — including those headed to California — are rolling out a new décor package that Hart described as “modern, fresh, efficient, bright and welcoming.”

“Our last 500 stores have opened in middle- and upper-income areas and those are some of our highest-volume and fastest-growing stores,” Hart said.

“We’re tough negotiators, and we’re always looking for deals,” he added, “but we’re also not afraid to invest in the best site in town.”