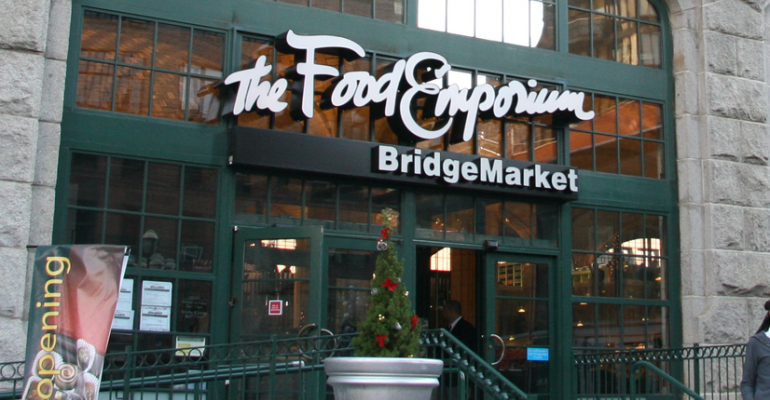 NEW YORK — How much of The Food Emporium will remain in the supermarket business was in question last week as the process of selling A&P’s Manhattan-based chain neared its final stages.

Two sources speaking on the condition of anonymity last week told SN that the previously reported interest in the 16-store chain from Kings Food Markets was limited to just five stores it would operate as supermarkets. Kings, they said, was bidding for 11 stores overall in partnership with a real estate firm with intentions to profit through the sale or lease of the other six locations.

One source close to the deal in the meantime maintained A&P was fielding at least one offer for all 16 stores from a private-equity backed local food retailer — believed to be Fairway Markets — but the status of such an offer was unclear last week. The source maintained that recent published reports suggesting a sale to the Kings group was “imminent” was a means of dissuading other such bidders.

Montvale, N.J.-based A&P said it would not comment on the sale process.

Some observers said supermarket operators have been hesitant to take over Food Emporium, whose Upper East Side stronghold has seen a recent influx of high-volume competitors, including Fairway and Whole Foods Market.

A sale to a non-supermarket suitor in the meantime presents other issues, including union contracts at Food Emporium stores. United Food and Commercial Workers Local 342, a Brooklyn-based union that represents some Food Emporium workers, reportedly filed suit against A&P to prevent the retailer from selling to buyers who would not honor its existing labor contracts. Local 342 officials were unavailable for comment last week.

Christian Haub, the former A&P chairman who today operates the private investment firm Emil Capital Partners, said his group this fall submitted a preliminary proposal to buy Food Emporium that contemplated reopening its union contracts but said his group was not selected to proceed to a second round of bids. Haub was chairman when A&P briefly put Food Emporium on the selling block in 2009, but said the experience indicated that winding down stores could be challenging. Haub stressed he had no knowledge of the current situation facing A&P executives and its advisors.

“The big complicating factor is if you sell just the lease and the space, you have to wind down the stores, and sell out the merchandise, and then — what do you do with the people? Do they bump into other stores that are in the same local, or would you have to pay them — all of which would reduce the net benefit you would derive from selling the stores,” he explained. “And it can create tension in the unions that have ongoing relationships with other A&P stores.”

Sources last week told SN that A&P — which is seeking to complete a turnaround begun during bankruptcy — is determined to complete a deal.