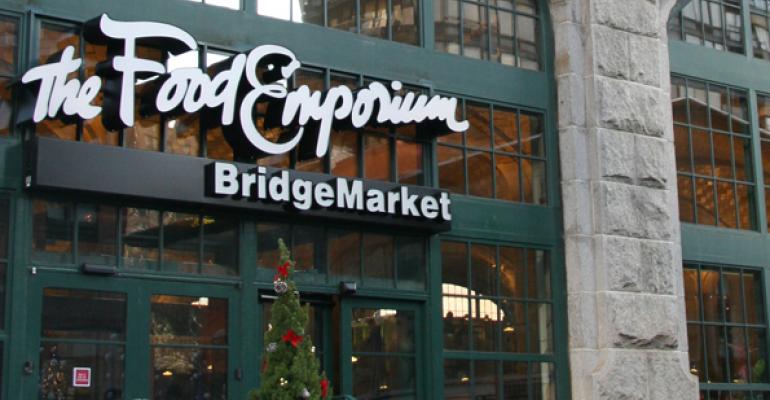 MONTVALE, N.J. — A&P last week said it has begun another attempt to sell its Food Emporium chain, betting that its most attractive — and only profitable — division will generate proceeds to invest in the turnaround of the remainder.

“The Food Emporium represents a unique urban footprint that requires a specific go-to-market strategy. Therefore, we’ve made the decision to market these 16 Manhattan stores to a variety of prospective buyers,” A&P said in a statement.

For sale are all of the Food Emporium’s Manhattan stores as well as its trade name. The lone Food Emporium store outside of the city, in New Canaan, Conn., is not for sale.

A&P acquired the Food Emporium chain in 1986 from Shopwell Group, and it has been a frequent topic of divestiture speculation over the years. A&P said it put the chain on the selling block in 2010, but reconsidered making a deal shortly before it filed for bankruptcy protection that December. Red Apple Group, the parent of the New York-based Gristedes grocery chain, was said to have been a leading suitor for Food Emporium then.

John Catsimatidis, chief executive officer of Red Apple, told SN last week that he remained interested in acquiring the chain, but did not say whether Red Apple would make a bid this time.

Trader Joe’s, Fairway Market and Whole Foods were also thought to be potential suitors for certain locations, but SN was unable to confirm any specific deals being discussed. An A&P spokeswoman last week said the company would not comment on trade speculation.

Karen Short, an analyst with BMO Capital Markets who followed A&P before its bankruptcy, valued the Food Emporium chain at around $200 million in 2010 (based on estimated EBITDA of $35 million), but last week said declining sales and profits since then would likely result in a valuation between $100 million to $150 million. She estimated its stores did between $200,000 and $300,000 in sales per week.

Although labor savings enacted during A&P’s bankruptcy likely helped to improve the cost structure at Food Emporium, higher rent expenses and new competitors are believed to have impacted the chain negatively, sources said.

Faith Hope Consolo, chairman of retail leasing and sales for Prudential Douglas Elliman Real Estate, New York, described Food Emporium as having “exceptional” locations that could attract a range of uses. “This is Christmas come early for Trader Joe’s,” she said.

Christian Haub, who was A&P’s CEO when the company last offered Food Emporium for sale, said he would expect Fairway and Kings Food Markets to show interest, and said it could present an interesting opportunity for Ahold’s Stop & Shop to crack the Manhattan market. He was less certain that non-union grocery chains would be willing to deal for Food Emporium stores, whose stores employ union workers.

Haub now heads investment group Emil Capital Partners, which employs both Andreas Guldin, A&P’s former chief strategy officer, and Hans Heer, who previously headed the Food Emporium division. Asked if Emil would be interested, Haub told SN, “I think it’s something we’ll probably take a look at, but it’s too early to say whether we would do something or not. We have a lot of expertise in the house. But it’s a matter of whether it can fit into our current investment strategy.”

One observer said he would be surprised to see a single buyer.

“We know [Catsimatidis] pursued them before. But does he still have the appetite for it? I’m not so sure,” the source said. “He’s also a bargain hunter, a smart buyer, who’s not going to overpay. But A&P is giving up a lot of EBITDA by selling the Food Emporium, and they will want to get paid for that.”