EL SEGUNDO, Calif. — Fresh & Easy Neighborhood Market this week said a reusable bag design created by one of its Las Vegas customers has been selected as the winner of the company’s 2012 Design-A-Bag Contest. 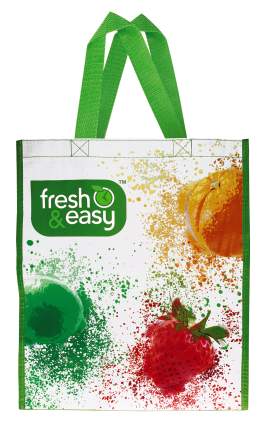 Eimi Marritt’s design, featuring an artistic portrayal of a fresh strawberry, lime, and orange using a splatter effect on a white background, was selected from among nearly 600 entries to this year’s contest. More than 25,000 votes were cast.

The limited-edition reusable bag is being offered in stores for 99 cents.

“I’m hopeful that my fun design will encourage customers to utilize reusable bags more frequently rather than always using paper or plastic bags,” said Marritt, in a statement.

As the grand prize winner, Marritt will receive a year’s worth of free groceries.

As previously reported, Fresh & Easy’s U.K.-based parent company, Tesco, is seeking to sell the 200-store chain, which operates in California, Arizona and Nevada.