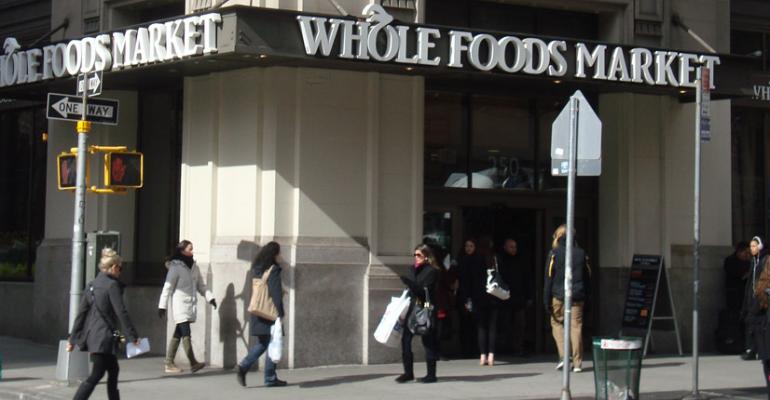 Gary Hirshberg, chairman of both Stonyfield Yogurt and the Just Label It campaign whose objective is mandated labeling of GM foods in the U.S., favors the precedent-setting move since it helps promote his cause, but also commends the retailer’s strategic ingenuity.

“From a sheer competitive point of view it’s a brilliant move because for so many retailers who are trying to compete with [Whole Foods] it says, ‘You’re going to have to do this too if you want to offer a parity proposition,’” Hirshberg said.

In five years, Whole Foods suppliers must label products containing GM ingredients. In the meantime, the brands it sources will consider whether to label products that contain GMOs or reformulate them to avoid having to do so.

There has been a flood of new enrollment in the Non-GMO Project since Whole Foods made its announcement earlier this month at Natural Products Expo West, said Megan Westgate, executive director of North America’s only independent verification body for products made from best practices for GMO avoidance.

Whole Foods began working with the Non-GMO Project to verify the GMO status of its 365 Everyday Value line in 2009 and encouraged its suppliers to do the same. It currently sells 3,300 Non-GMO Project verified products from 259 brands in its American and Canadian stores. Whole Foods also has seven locations in the U.K., where GMO labeling is already mandatory.

Westgate said interest from conventional producers and retailers has been on the rise since last fall, when California’s mandatory labeling ballot initiative — known as Proposition 37 — raised awareness of genetically modified foods nationwide. Californians voted down the measure 53% to 47%.

In addition to verifying that products warrant the Non-GMO Project seal, the non-profit works with manufacturers to find new suppliers and reformulate their recipes so they can become compliant with the standard.

“While none of these [mainstream] companies have completed the enrollment process yet, they’ve been moving forward and I think this announcement by Whole Foods will certainly encourage them to complete the enrollment and verification process,” she said.

Hirshberg agrees that even brands that aren’t distributed through Whole Foods are considering whether to voluntarily label GMO foods or reformulate them.

“I’ve been approached by many brand managers whose companies fought Proposition 37 and it’s a problem for them because when they fund a no-GMO labeling campaign what they’re really saying is, ‘My brand stands for you not knowing what I’m selling you,’” said Hirshberg. “Many brand managers and food executives have been talking to our group and saying, ‘Maybe the label is less painful than the fight.”

Although Hirshberg would not name the companies, the New York Times reported that Hirschberg, along with executives from Wal-Mart and about 20 other CPG companies attended a meeting in Washington earlier this year to discuss lobbying for a national labeling program. According to the report, some companies wanted to persuade the Food and Drug Administration to proceed with federal labeling.

When asked about the meeting in Washington, GMA’s Finkel said, “There was no formal meetings of any parties to the best of my knowledge, and it wasn’t a meeting to discuss labeling, and it surely didn’t involve the FDA.”

Last month, a federal bill to mandate the labeling of foods containing GMO was introduced in Congress. Individual states also continue to discuss the issue.

“There are now 22 states that will debate legislation this year on whether to [require] labeling so these companies can see the writing on the wall,” Hirshberg said.

As the first national chain to set a deadline for GMO transparency, Whole Foods inspired a similar move by at least one natural and organic retailer.

Last week, five-store Down to Earth, based in Honolulu, announced it will begin requiring any products with ingredients containing genetically modified organisms to be labeled as such by 2018.

“Whole Foods’ announcement is a game changer,” said Mark Fergusson, Down to Earth chief organic officer, in a statement. “It marks a big victory in the move toward the labeling of genetically [modified] foods.”