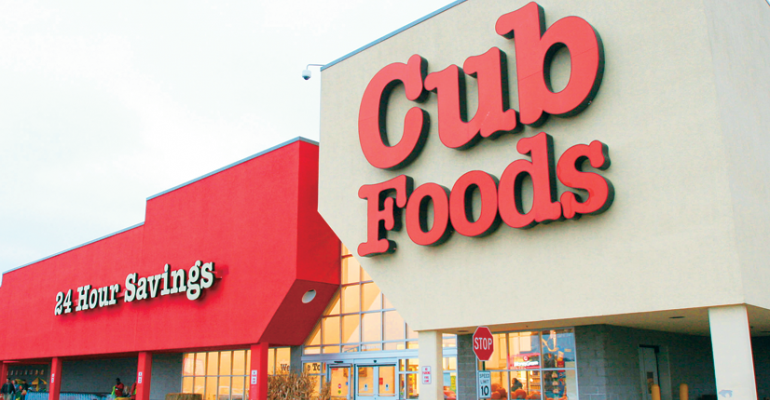 Supervalu will continue to own a group of 184 conventional stores operating under several regional banners, including Cub Foods, Shoppers Food & Pharmacy, Farm Fresh, Shop ‘n Save and Hornbacher’s.
News>Marketing

Supervalu Gets ‘Vote of Confidence’ From Cerberus

&quot;[Sam] Duncan is a very seasoned executive who has been part of two turnaround companies so in addition to his supermarket experience, he should do well bringing an urgency to making changes.&rdquo; &mdash; Neil Stern, senior partner, McMillanDoolittle

MINNEAPOLIS — An investment group led by Cerberus Capital Management is scheduled to take control of between 20% and 30% of Supervalu and install a new top leadership following a tender offer.

The tender offer is seen as a vote of confidence “from an investor that has had the opportunity to look under the hood,” according to Deborah Weinswig, managing director of Citi Research, New York.

Earlier this month, Supervalu agreed to sell five retail chains and related assets to Cerberus for $100 million in cash and assumption of $3.2 billion of debt.

The agreement was “a deal that had to get done,” Neil Stern, senior partner at McMillanDoolittle, Chicago, told SN. “Supervalu had to act because its performance was deteriorating too much.

The deal is a positive for Supervalu, Stern said, “because it makes it a more viable company in the long run. It essentially turns the clock back to where it was in 2006, before the Albertsons acquisition, and it will now be clearer how the company is performing.

“Supervalu definitely needs a major change in direction,” Stern added. “It needs a strategy for what the ongoing business is going to be. A tremendous amount of repair work needs to be done in terms of rebuilding relationships with its wholesale accounts because trying to be a retailer and a wholesaler damaged its credibility as a wholesaler.”

Jim Hertel, managing partner at Willard Bishop, Barrington, Ill., said Supervalu’s distribution business will benefit once it’s out of the retail business “because it eliminates questions about where its loyalties lie and which side of the fence it’s on — and that should make it easier for the company to add more wholesale business as a pure distributor.”

Under the agreement, Supervalu will continue to operate as a wholesale distributor; to own and license the Save-A-Lot chain (encompassing 376 corporate stores and 943 licensed units); and to own a group of 184 conventional stores operating under several regional banners, including Cub Foods, Shoppers Food & Pharmacy, Farm Fresh, Shop ‘n Save and Hornbacher’s.

Once the tender offer has been completed, Robert Miller, who runs the Albertsons stores Cerberus acquired in 2006, will become Supervalu’s non-executive chairman and Sam Duncan will become president and chief executive officer.

Though Miller will not have a say in the day-to-day operations, “he is an extremely well-respected retailer whose advice will be very valuable,” Stern told SN. “And Duncan is a very seasoned executive who has been part of two turnaround companies — OfficeMax and ShopKo — so in addition to his supermarket experience, he should do well bringing an urgency to making changes.”

John Heinbockel, managing director at Guggenheim Securities, New York, said he expects Duncan will “hit the ground running with a sense of urgency,” noting he began working with existing Supervalu management two weeks ago, right after the transaction with Cerberus was announced.

Although the sale of the retail chains should fundamentally improve Supervalu’s secular prospects, the remaining businesses are not performing well, “and it will take time for growth to resume,” Heinbockel pointed out, with additional earnings declines likely in 2013.

Among the issues it must tackle are developing a new organizational structure, determining where to cut costs, figuring out how to turn Save-A-Lot around and devising a long-term financial plan for the company, he said.

“If Supervalu is to grow EBITDA over the longer term, it will have to be largely driven by Save-A-Lot, since food wholesale is a very low-growth business and the traditional food retail banners have more limited growth prospects than Save-A-Lot,” he explained.

According to Stern, Supervalu faces the challenge of realizing the full promise of the Save-A-Lot stores. “With a more focused company, the new management has a great opportunity in the marketplace to improve the sales results at those stores,” he explained.