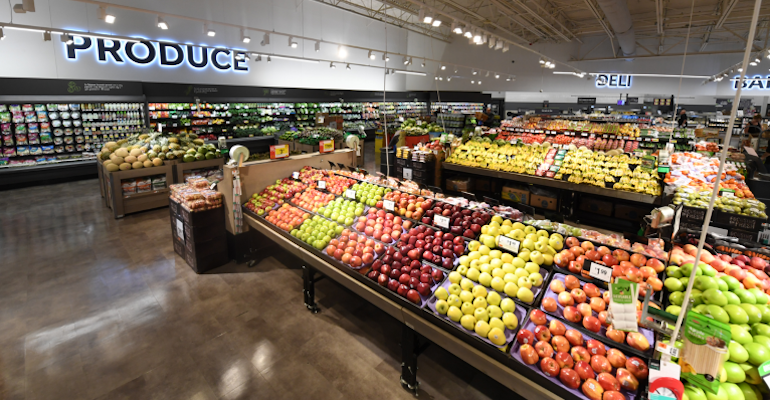 Elevated food-at-home demand have continued to be a U.S. sales driver, along with omnichannel and brick-and-mortar initiatives, Ahold Delhaize reported. Third-quarter comp sales reflect a negative impact of 0.8 percentage points from an unfavorable calendar shift for Independence Day, but the retailer noted that comp sales are up 15.3% on a two-year stack, in line with fiscal 2020’s 15.8% growth. 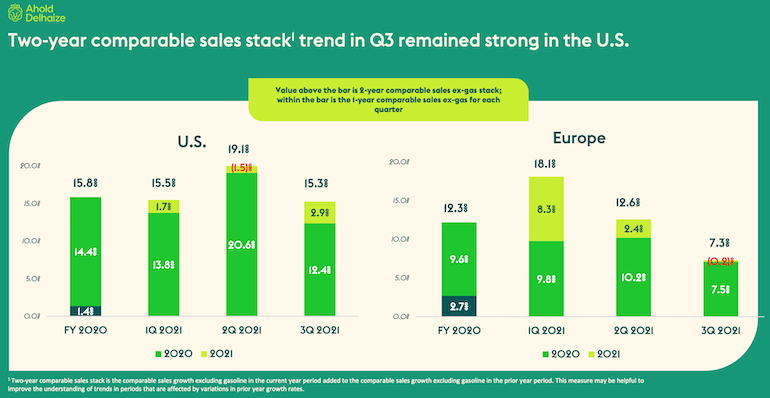 Ahold Delhaize noted strong growth in both the U.S. and Europe on a two-year basis as the company cycles pandemic-driven gains from 2020.

In a conference call with analysts on Wednesday, Ahold Delhaize CEO Frans Muller cited store upgrades and additions as a sales catalyst in the U.S., including plans to remodel 50 stores at Stop & Shop, the company’s largest supermarket chain, in fiscal 2021.

“We remodeled 11 additional Stop & Shop stores in the third quarter, bringing the total number of stores remodeled since the inception of the program to more than 110. And we continue to see solid sales uplifts from our remodeled stores,” Muller said. “Finally, from a brand perspective, I’d like again to call out Food Lion, our fastest-growing brand in the U.S., which achieved its 36th consecutive quarter of positive comparable-sales growth. In addition, the 71 recently added stores in early 2021 have now been fully integrated and are exceeding sales expectations.”

Online sales in the third quarter at Ahold Delhaize USA — also including the Giant Food, Giant/Martin’s and Hannaford chains plus online grocer FreshDirect and e-commerce unit Peapod Digital Labs — jumped 52.9% to $892 million from $583 million a year ago, when the company recorded 114.7% growth in U.S. e-commerce sales. The gain also was in the range of the 61% growth reported in the 2021 second quarter.

“Excluding FreshDirect, our U.S. online sales business grew at 26.2% in Q3, even as we lap triple-digit growth in the year-before period,” Knight explained. “The step change in the way many consumers shop favoring the convenience of online purchases is becoming more clear with each and every quarter that we trade through. Our unique and brand-specific omnichannel offering is having a positive and sustainable effect on our U.S. business.”

Ahold Delhaize USA, too, is making steady progress with strategic initiatives, Muller noted on the call. The U.S. supply chain transformation project has reached 65% of center-store volume being self-distributed, up 50% from last year, and the network is expected to be 100% self-managed in 2023.

“We opened this week our new automated e-commerce fulfillment center in Philadelphia for The Giant Company, which will allow us to drive increasing efficiency and productivity gains,” said Muller. “Our Giant Company, Hannaford and Stop & Shop brands in the U.S. have recently introduced new 30-minute delivery services, including fresh, prepared foods and essential household products.”

In his prepared remarks, Muller also reported that Giant Food is moving forward with its Ship2Me “endless aisle” service, expected to launch sometime in the second half. “To advance omnichannel offerings, Giant Food will soon launch Ship2me, an online marketplace solution, initially offering an additional 40,000 general merchandise and food items,” he stated.

Ahold Delhaize finished the third quarter with 7,343 stores in the U.S., the Netherlands, Belgium and Central and Southeastern Europe, compared with 7,068 a year earlier, reflecting a net gain of 275. Ahold Delhaize USA had 2,044 stores at the quarter’s end, for a net increase of 74 after 77 locations were opened or acquired and another three were closed or sold.