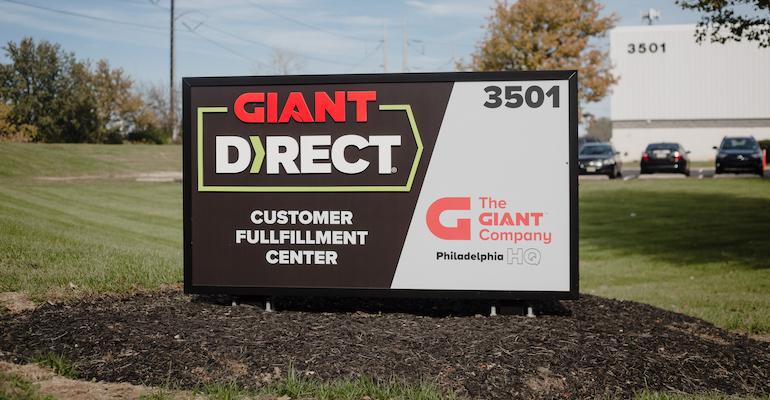 Related: More Philadelphia stores on the way from The Giant Company

Plans call for the new EFC to begin filling delivery orders for the towns of Camden, Cherry Hill, Gibbsboro, Haddonfield, Marlton, Medford, Mount Laurel and Voorhees, N.J., starting Nov. 16, with more South Jersey markets to be added over the next several months, according to the company, which announced the automation project in mid-February. The grocer currently has no physical stores in New Jersey.

“Starting with the introduction of our Giant Heirloom Market format in 2019 followed by the opening of our Philadelphia flagship Riverwalk Giant in March and three more new stores across the city still to come this year, The Giant Company has been laser-focused on how we can best serve Philadelphia families,” Bertram told attendees at the EFC’s ribbon-cutting. “Today is the culmination of more than two years of collaboration between our team, Ahold Delhaize USA Supply Chain, and our partners at Swisslog and AutoStore, resulting in a state-of-the-art facility that will propel our Giant Direct offering across greater Philadelphia and, for the first time, southern New Jersey. Our new Giant Direct EFC represents the future of grocery and the future of The Giant Company, as we are one step closer to realizing our full omnichannel aspirations.”

The Philadelphia EFC will stock over 22,000 products — reflecting the assortment of a typical Giant supermarket — and fill up to an estimated 15,000 home delivery orders weekly, Giant reported. Besides being able to handle more capacity, the automated facility stands to speed order fulfillment and accommodate rising demand for delivery service, the retailer added.

With the new Giant Direct location, Giant noted that it became the first Ahold Delhaize USA supermarket chain to implement multi-pronged EFC technology, including the latest in robotics, machine learning and vertical integration. The project includes the installation of AutoStore’s robotic storage and retrieval system and its supporting Swisslog SynQ software and pick stations. Along with the hive robotics from Norway-based AutoStore and Mason, Ohio-based Swisslog, the EFC includes Peapod Digital Labs’ proprietary manual-picking capabilities. Peapod said its picking system in combination with the Autostore grid storage density and “goods to person” productivity gains will provide a flexible solution for streamlining online grocery order fulfillment.

The system works as follows: Two space-saving, 3D grids in the Giant Direct EFC contain totes filled with fresh and non-perishable groceries. When a customer places a an online order, associates work alongside robots that quickly gather the items. After the products are bagged, workers place orders into temperature-controlled totes and then onto to trucks for delivery to customers.

“The opening of this facility is an exciting step forward as we continue to collaborate to evolve the supply chain network for the future,” Lewis commented. “Solutions like micro-fulfilment centers will be an important part of the self-distributed network, positioned to serve customers whenever, wherever, however they want to shop.”

The Giant Company launched the Giant Direct brand in February 2019 when it debuted its first e-commerce hub in Lancaster, Pa. Customers across 90% of the chain’s footprint have access to online grocery ordering and delivery and pickup service. This past January, Giant launched a subscription program called Choice Pass for Giant Direct customers, providing unlimited free delivery and pickup for $98 per year or $12.95 per month.

The Philadelphia Giant Direct EFC now has more than 125 employees, and the facility is slated to add another 125 jobs.

“The Giant Company’s presence in and commitment to Philadelphia benefits our city’s residents by offering quality groceries, good jobs, and community support,” Mayor Jim Kenney stated. “I’ve been pleased with and proud of Giant’s work in Philly over the last few years and look forward to seeing the new facility in Eastwick serve its community and surrounding areas.”