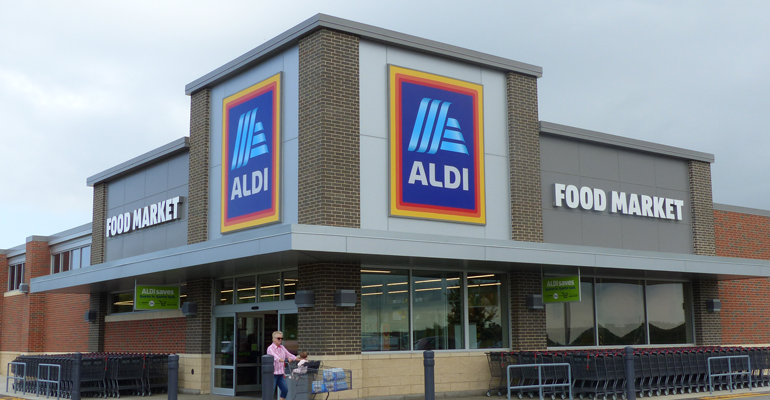 Photo by Russell Redman
Including the two upcoming stores, Aldi will have eight stores on Long Island, along with seven in New York City.
News>Retail & Financial

Batavia, Ill.-based Aldi U.S. said Thursday that stores will be added in Valley Stream and North Babylon, N.Y. The hard discount grocer noted that the Valley Stream store, located at 750 Sunrise Hwy. and due to open Feb. 27, will be its first location in Nassau County. The North Babylon store is expected to open this summer, and the company said the address and opening date will be announced in the coming months.

Nassau County borders the New York City borough of Queens, where Aldi has a store in Rego Park. The chain also has six other New York City locations, with two stores apiece in Brooklyn, the Bronx and Manhattan.

Related: Against Aldi and Lidl, personalization is the smart move

Including the upcoming Valley Stream and North Babylon locations, Aldi will have 15 stores in New York City and Long Island. The company said the two planned stores will mark its first new Long Island locations since 2016. Aldi opened its first Long Island store, in Bay Shore, in 2011.

“The goal of our expansion nationally and locally is to reach new shoppers, and we are growing on Long Island because people want Aldi in their communities,” Bruce Persohn, South Windsor division vice president at Aldi, said in a statement. “We’ve been operating on Long Island and in New York City for nearly 10 years and have been very successful, which is why we’re opening new stores, including our first store in Nassau County.”

In December, Lidl opened four Long Island stores, including one in Nassau County (Plainview) and three in Suffolk County (Huntington Station, West Babylon and Center Moriches). Another four stores are expected to open by the summer, including in East Meadow (Nassau County) and in Lake Grove, Oakdale and Patchogue (Suffolk County).

Arlington, Va.-based Lidl US signaled its Long Island market entry with the acquisition of Best Market, announced in November 2018 and finalized in early 2019. Of the 27 Best Markets acquired, 24 are on Long Island. One of those locations, a small store in Hicksville (Nassau County), was closed in September. Lidl also is slated to close a Best Market in Holmdel, N.J., this month. The other two acquired Best Market stores are in New York City (Astoria and Harlem).

The Long Island locations opened thus far by Lidl include new stores and converted Best Market stores. A Lidl US spokesman said in December that the company could envision having more than 50 stores in Long Island.

Industry observers, however, have said Aldi already has accounted for Lidl’s growth in current and new market areas through its own rapid expansion.

Aldi is more than halfway into a $5.3 billion, five-year program that will enlarge its U.S. store base by almost 50% and upgrade most of its locations. All of the Long Island stores already have been remodeled. Overall, the chain now operates over 1,900 stores in 36 states, and it aims to grow to 2,500 stores by the end of 2022.

In tandem with that initiative is a major product expansion in which 20% of items in every store will be new versus a year ago. Focusing on fresh, organic and easy-to-prepare offerings, the new-product push will boost the selection of fresh food by 40%.

“Aldi customers trust us to offer an easy, enjoyable grocery shopping experience with the high-quality food and products they need at the lowest prices, and that’s why they love shopping with us,” Persohn added. “No matter what, we won’t be beat on price.”

Through its national partnership with Instacart, Aldi also offers online grocery delivery in more than 10,000 ZIP codes, covering 95% of its stores.