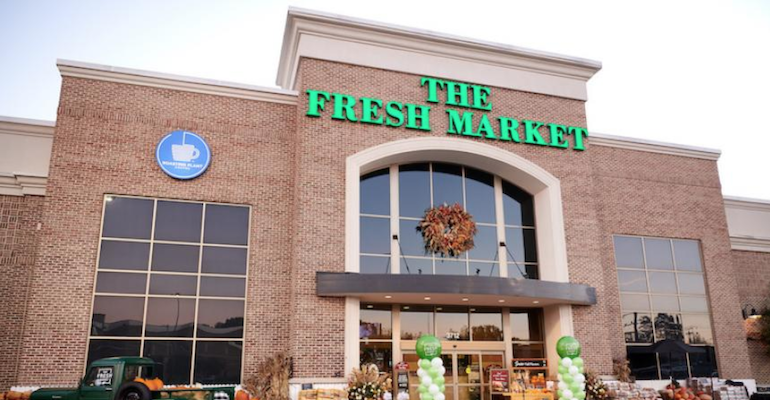 The Fresh Market
The Fresh Market’s preliminary IPO filing in early 2021 came nearly five years to the day after the specialty grocer had unveiled plans to go private.
News>Retail & Financial

Specialty grocer The Fresh Market is canceling its initial public offering a year after submitting its IPO filing.

The Fresh Market Holdings Inc. on Wednesday requested that the Securities and Exchange Commission withdraw its registration statements and amendments for an IPO. In the July 13 SEC filing, the Greensboro, N.C.-based retailer also indicated the request effectively scraps its IPO effort.

The Fresh Market submitted an S-1 registration statement for an IPO on July 16, 2021, following a draft IPO registration statement filed on March 12, 2021, as well as several amended filings. Before the withdrawal request, most recent action on the IPO had been a March 11, 2022, filing of a preliminary prospectus. Plans called for The Fresh Market’s common stock to list on the Nasdaq Global Select Market exchange under the symbol TFM.

The IPO withdrawal, first reported by Reuters, comes two months after Cencosud, a leading retail group based in Chile, said it had purchased 67% of The Fresh Market in a $676 million deal with Apollo Global Management, whose affiliates manage the grocery chain’s controlling fund. Overall, The Fresh Market operates 160 stores in 22 states, with the majority in Florida. The retailer generated revenue of $1.93 billion in 2021.

The Fresh Market’s preliminary IPO filing was made nearly five years to the day after the retailer had unveiled plans to go private.

New York-based Apollo and The Fresh Market announced on March 14, 2016, that the retailer agreed to be acquired by an affiliate of the private equity firm in a deal valued at about $1.36 billion. The Fresh Market founder and chairman Ray Berry and his son Brett Berry, who together owned 9.8% of the chain’s outstanding shares, agreed to roll over the vast majority of their holdings in the transaction with Apollo. At the time, The Fresh Market operated 186 stores in 27 states, and the deal was completed in April 2016.