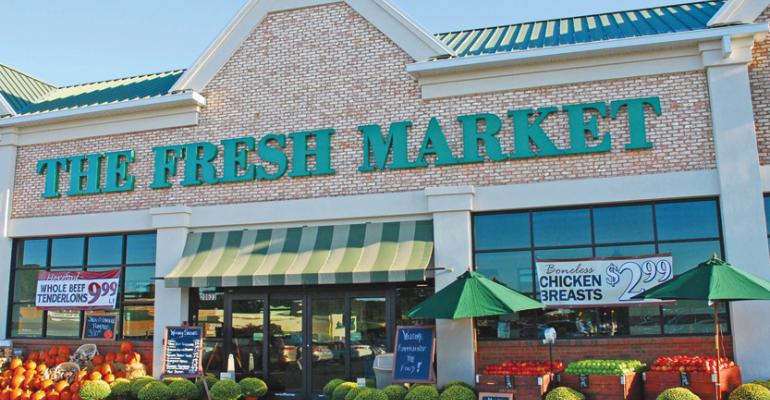 Apollo to buy Fresh Market for $1.36B

The Fresh Market, the innovative but struggling gourmet specialty chain, said Monday it would be acquired by Apollo Global Management in partnership with company founder and chairman Ray Berry, for around $1.36 billion.

The Fresh Market said last year it was reviewing strategic options including a sale.

The deal announced Monday was approved by The Fresh Market board with the exception of chairman and company founder Ray Berry, who recused himself from all board discussions on the deal. Ray Berry and son Brett Berry, who together hold 9.8% of the company's stock, have agreed not to tender shares into Apollo's offer but will roll over "the vast majority" of their holdings with Apollo.

George Golleher, a grocery executive who served as CEO for previous Apollo-owned retailers Smart & Final and Ralphs/Food-4-Less would be a co-investor, Apollo added. Apollo said it was looking forward to "beginning discussions" with the current executive management team, led by Rick Anicetti who was appointed last year.

Anicetti in a statement said “we are excited about this transaction with Apollo, which recognizes the value of The Fresh Market’s strong brand and significant growth prospects while providing stockholders with an immediate and substantial premium. Apollo is a highly-regarded investor, bringing deep industry expertise and financial resources, and we look forward to working with them to build on our progress in achieving our strategic plan to deliver long-term profitable growth.”

The Fresh Market, headquartered in Greensboro, N.C., would be yet another small-box fresh food retailer to have been acquired by Apollo, which previously owned Sprouts Farmers Market. That deal turned out well for both sides with Sprouts today positioned as a leading value player in natural and organic and fresh foods.

The Fresh Market has seen its results suffer as demand for fresh offerings at sharper prices has contributed to slowing sales at upmarket brands. The company operates 187 stores in 26 states with estimated annual sales of $1.9 billion.

“We are delighted about this transaction with The Fresh Market, which was one of the early pioneers in small-box grocery, offering unique, delicious and healthy food with a keen focus on perishables,” Andrew S. Jhawar, senior partner and head of Apollo's retail and consumer group. "We believe there is a significant opportunity to enhance the brand, merchandise offering and price-value combination to make The Fresh Market a primary destination for food shoppers, while at the same time being committed to social responsibility through partnerships with local vendors and communities."

Apollo's offer of $28.50 per share represents a premium of 24% over The Fresh Market's closing price Friday and 53% above where it was trading when press speculation about such a deal surfaced in February. It said it would fund the deal with $800 million in new debt and $525 million in new equity including the Berry's contribution.

This story has been updated to clarify the per-share price in the deal.