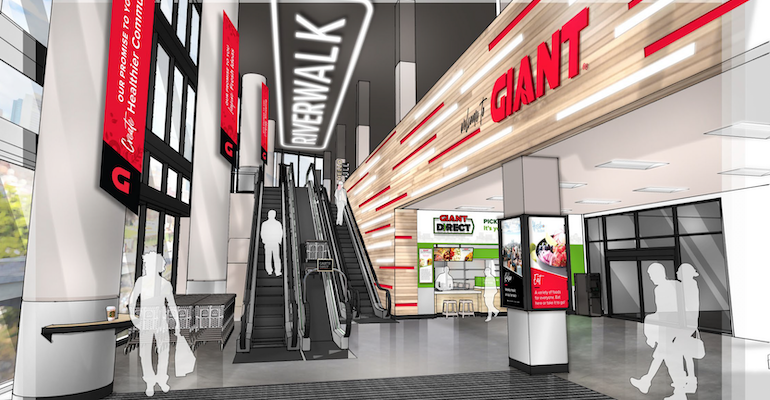 The Giant Company
Due to open March 19, Giant’s two-floor store at the Riverwalk project in downtown Philadelphia is situated on the second floor of a 25-story tower, with the ground-floor lobby offering direct access to an online grocery pickup station (see rendering above).
News>Retail & Financial

The Giant Company stays on growth path in Pennsylvania

The Giant Company is expanding its presence in Philadelphia with a pair of new Giant supermarkets — including its first two-level location — as well as in central Pennsylvania with a new Giant store in Benner Township.

After ground was broken in August 2019, a 65,000-square-foot Giant store is set to open March 19 at the corner of 23rd and Arch Streets in downtown Philadelphia as part of the Riverwalk project. An 8.5-acre, mixed-use development along the Schuykill River, Riverwalk includes two luxury residential towers plus commercial, retail, hospitality and community space. Giant’s store is situated on the second floor of the 26-story Tower 1 at 60 North 23rd St.

In late March, Giant plans to start construction of a 67,000-square-foot store in northeastern Philadelphia’s Castor Gardens neighborhood. Located at 2201 Cottman Ave., on the corner with Bustleton Avenue, the new Giant is slated to open later this year. 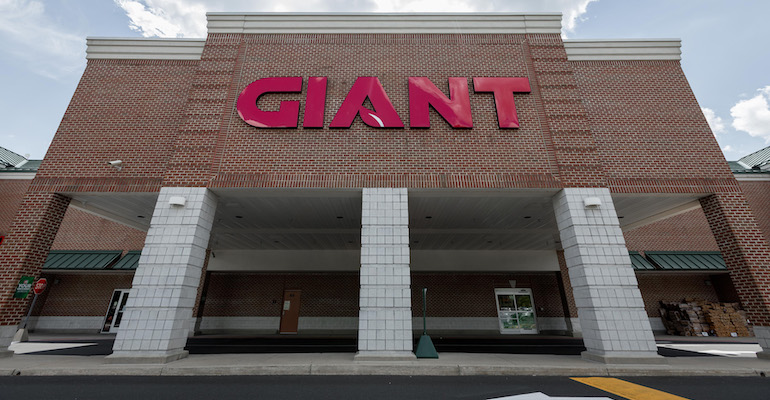 The Riverwalk and Cottman Avenue stores will give Giant six locations Philadelphia, joining its Grant Avenue Giant supermarket, which opened in 2011, and three small-format Giant Heirloom Markets opened in 2019 in the city’s Graduate Hospital, University City and Northern Liberties neighborhoods. Including the new stores and a new automated e-commerce fulfillment center on Island Avenue, due to open in November, Giant said its capital investment in Philadelphia will top $106 million.

Carlisle, Pa.-based Giant, too, is enlarging its Pennsylvania footprint, now at 155 stores, with plans to build a 50,000-square-foot supermarket on the northwest corner of Paradise Road and Benner Pike in Benner Township, just north of Penn State University. Construction is scheduled to begin next year, with the store expected to open in 2023, Giant said.

The Riverwalk location in Philadelphia will serve as Giant’s flagship store. The location houses a ground-level parking garage with direct access to the store’s lobby. Upon entering the lobby, accented by the work of local artists, customers will see a Starbucks cafe and a Giant Direct online grocery pickup station. Shoppers can use an elevator, escalator or stairs to access the full store on the second floor, and a “cartalator” moves shopping carts between levels. Residents in the tower above the store have access to a private elevator that brings them directly to the second level of the Giant store.

“Philadelphia’s grocery scene is experiencing a major renaissance, and The Giant Company has been at the forefront, introducing new formats, opening new stores and expanding grocery delivery services. Our Riverwalk store celebrates this transformation, offering an elevated omnichannel grocery experience unlike anything Philadelphia has ever seen,” The Giant Company President Nicholas Bertram said in a statement. “Expertly designed to meet the needs of urban dwellers, our Riverwalk store is the perfect blend of modern sophistication and surprise, and of course, pays homage to the city’s fantastic food scene. We can’t wait for opening day and to finally let the community discover what we’ve created for them, a one-stop destination for all things food.” 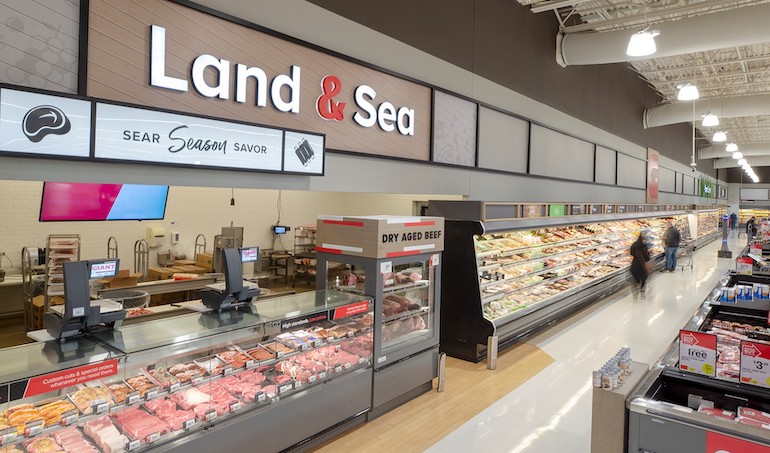 Giant said the Riverwalk store incorporates design elements inspired by its heritage and the Heirloom Market format, including wood elements and its signature red and black colors. Giant enlisted Chute Gerdeman, an award-winning retail design and branding firm in Columbus, Ohio, for the store’s design.

Jessica Fischer, a 22-year Giant veteran, has been named as manager of the Riverwalk store. Previously, she served as manager of the Giant Heirloom Market in University City. “In everything we do, we aspire to deliver a grocery experience that inspires and excites our customers and to be a community partner that lifts up the families and neighborhoods we serve in every sense of the word,” Fischer commented. “Riverwalk will be no different.”

A food hall will be the heart of the Riverwalk store, including Mission Taqueria Mexican cuisine; soup and salads from Saladworks; premium sushi from Hissho Sushi; and made-to-order sandwiches, flatbread pizza, smoked meats, hot food and gelato. With floor-to-ceiling windows, the food hall overlooks the Schuylkill River, 30th Street Station and the riverside bike path. Along with an indoor seating area, customers can eat and drink on the food hall and store’s terrace, which has lounge-style furniture and fire pits.

Other highlights of the Riverwalk Giant include the chain’s biggest plant-based section (meat and fish substitutes, vegan cheese, ice cream and other desserts); a produce area with 600 varieties of fresh fruit and vegetables, including many from local farms; a meat and seafood department featuring a new aged beef program; a full-service deli with an expanded prepared food and grab-and-go meal selection, a charcuterie station and a mozzarella station; and a large cheese section with a wide assortment of domestic and imported cheeses. Locally sourced products across the store include Philabundance’s Abundantly Good cheese, One Village Coffee, Claudio’s, High Street Philly, Asher’s Chocolates and Isgro Pastries. 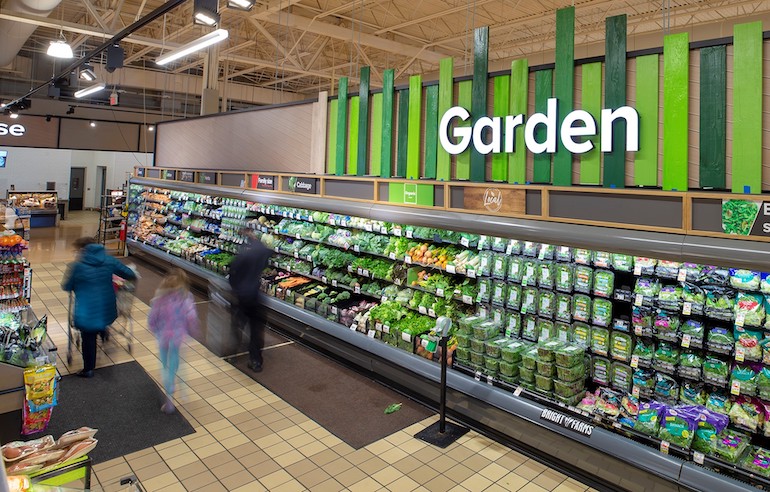 Locally sourced fruit and vegetables as well as organic and value-added options are fixtures of Giant's Garden produce department.

“Our new brand platform, For Today’s Table, is all about encouraging families to connect over a meal. It’s what we stand for and guides all that we do,” Bertram added. “Our Riverwalk store brings For Today’s Table to life in a way that until now, we have only dreamed about. It’s the sum of the team’s very best work and is a tangible symbol of The Giant Company’s continued focus on omnichannel growth, innovation and, above all else, families and community.”

Giant said the Benner Township store will bring 100 new jobs to the community, while the Cottman Avenue and Riverwalk locations will add 200 and 220 jobs, respectively.

The new stores reflect Giant’s stepped-up investment in its home state. In January 2020, the grocer unveiled a $114 million, 18-month capital investment for Pennsylvania including several new stores, a the Philadelphia e-commerce hub and 35 store remodels.