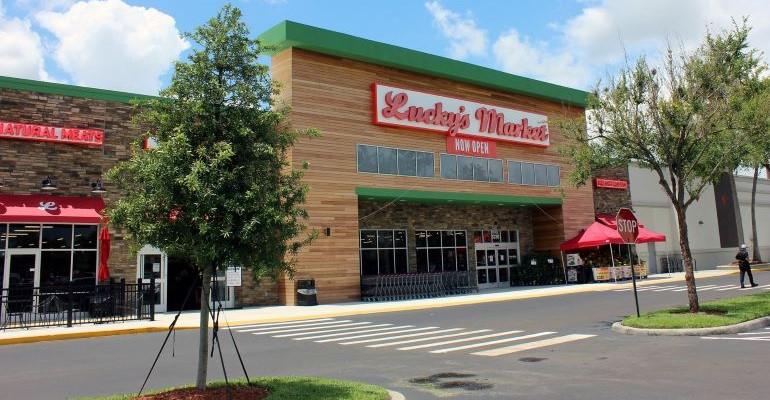 Less than a week after disclosing a Chapter 11 bankruptcy filing, Lucky’s Market unveiled stalking horse bids from Aldi and Publix Super Markets for 11 of its stores.

Overall, Niwot, Colo.-based Lucky’s plans to close 32 of its 39 stores. The specialty grocer said it will continue to operate seven stores, including its locations in Traverse City, Mich.; Cleveland and Columbus, Ohio; Columbia, Mo.; Melbourne, Fla.; and North Boulder and Fort Collins, Colo.

The store sales are subject to court approval and an overbidding process, according to Lucky’s, which said it has retained financial advisory firm PJ Solomon to assist in the divestment of stores and other assets.

“The company continues to have active dialogue with various buyers,” Lucky’s stated. “The company still plans to cease operations in the 32 identified locations in the coming weeks and is currently running sales for its customers in those stores.”

Publix is under contract to buy five Lucky’s leased stores in Clermont, Naples, Neptune Beach, Orlando and Ormond Beach, Fla., a spokeswoman for the Lakeland, Fla.-based chain confirmed. No further details are being disclosed, since Publix is still working through the process with the landlords of the five locations and conducting due diligence, she said.

Aldi also declined to provide details but said it has agreed to purchase Lucky’s stores.

“We can confirm Aldi is acquiring several Lucky’s Market locations in Florida. Among other innovative real estate strategies, site acquisitions are an important part of our growth efforts. We are pleased to continue to expand our presence across the country,” Dan Gavin, vice president national real estate for Batavia, Ill.-based Aldi U.S., said in a statement. “We will share more information as it’s available,” he added.

Lucky’s reported on Jan. 21 that, “after careful deliberation and a thorough review of strategic and financial alternatives,” it planned to close most of its stores and file for Chapter 11 bankruptcy protection to facilitate the sale of its remaining locations and assets.

“At the time of filing, the company had sufficient cash on hand and an agreement for the consensual use of cash collateral,” Lucky’s said. “As such, the company should have the continued ability to meet its financial obligations, including those to its employees, as well as to vendors, for the continued supply of product to its operating locations.”

Specializing in natural and organic groceries, Lucky’s operates stores in 10 states: Colorado, Florida, Georgia, Indiana, Kentucky, Michigan, Missouri, Montana, Ohio and Wyoming. The retailer didn’t give a timetable for the planned store closings, but last week a source with knowledge of the situation told Supermarket News that Lucky’s aims to close the 32 stores by Feb. 12.

Lucky’s position deteriorated after The Kroger Co. said in early December that it would divest its stake in the grocery chain. In April 2016, Kroger announced a strategic partnership with Lucky’s that included an undisclosed equity interest. At the time, Lucky’s had 17 stores in 13 states.

*Editor's Note: Story updated with comment from Publix and Aldi.