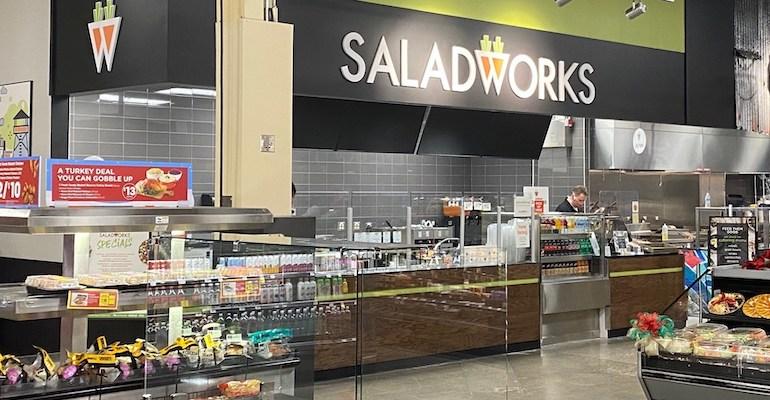 Saladworks
Saladworks opened its first Kroger location last November in Cincinnati and plans three more there plus another at the supermarket giant's store in Newport, Ky.
News>Retail & Financial

This summer, fast-casual restaurant chain Saladworks plans to wrap up the opening of four more locations inside Kroger supermarkets in Ohio and Kentucky.

So far, two of the new Saladworks sites have opened at Kroger stores in Cincinnati, including the grocer’s locations at 11390 Montgomery Rd., 7580 Beechmont Ave. and 3636 Springdale Rd. West Conshohocken, Pa.-based Saladworks said yesterday that the next Kroger location will open soon at 130 Pavilion Pkwy. in Newport, Ky., but didn’t specify a date.

Saladworks made its debut at Kroger last November in another Cincinnati store. The company said its new Ohio restaurants will add to the Kroger locations and two locations in Columbus.

“We are excited to grow our Saladworks brand in Ohio in these high-traffic stores and believe it will lay the foundation for future franchise growth of Saladworks throughout the state," Eric Lavinder, chief development officer at WOWorks, Saladworks’ parent company, said in a statement. “We are looking to recruit potential franchisees who want to join our health-focused family of brands with exciting development opportunities in an untapped state.”

To date, Saladworks has restaurants in 10 supermarkets in Pennsylvania, Maryland, Ohio and New York, including at ShopRite, The Fresh Grocer, The Giant Company and Kroger stores. Plans call for more grocery store locations to open in 2021 and 2022.

Earlier this year, Saladworks signed a deal with Ghost Kitchen Brands to open more than 90 new “store within a store” restaurants at Walmart locations in the United States and Canada.

Like Saladworks’ more than 100 stand-alone locations in 18 states and two countries, the in-store restaurants focus on customization through an array of over 60 fresh, flavorful and healthy ingredients. In addition to its signature recipes, Saladworks offers create-your-own options, including salads, wraps, grain bowls, soups and more, as well as grab-and-go items and catering options. Orders also can be placed online and delivered through third-party services.

Saladworks said it opened 11 new locations in Nevada, Florida, Tennessee and Ontario during WOWorks’ 2021 first quarter, including traditional and nontraditional spaces such as supermarkets and ghost kitchens. With the new Kroger locations, the company said it expects strong growth in Columbus, Cleveland, Cincinnati, Toledo and Akron, Ohio. Last year, about 80% of the 40 Saladworks restaurants that opened were in nontraditional settings.

Overall, WOWorks has 217 restaurants in the U.S. and Canada, including the Saladworks, Garbanzo Mediterranean Fresh, The Simple Greek and Frutta Bowls banners.