Save A Lot
Save A Lot is selling off its corporate-run stores to local operators under a plan to transition to a wholesale business model.
News>Retail & Financial

Save A Lot divests another half-dozen stores

Save A Lot is selling another six of its corporate-owned stores to a company that acquired more than 30 locations two months ago.

The St. Louis-based discount grocer said Tuesday that Yellow Banana LLC has purchased four Save A Lots in Jacksonville, Fla., and four in Dallas, bringing its total to 38 stores in Ohio, Illinois, Wisconsin, Florida and Texas.

A retail grocery-focused subsidiary of minority-owned holding company 127 Wall Holdings LLC, Yellow Banana acquired 32 Save A Lot supermarkets in the Cleveland, Chicago and Milwaukee areas in early September. The stores generate combined annual revenue of over $130 million, making Yellow Banana one of Save A Lot’s largest retail partners.

For Save A Lot, the sale furthers its efforts to transition to a wholesale business model. In December, the company unveiled plans to divest more than 300 corporate-operated stores to current and new retail partners and refocus on distribution and support services, including private label, for independent Save A Lot operators. At the time, the company had 14 distribution centers and more than 1,000 stores in 33 states, with the vast majority of the locations licensed by over 200 independent grocers. Save A Lot said it aims to retain 21 corporate-operated stores in St. Louis to serve as testing sites for retail partners.

Related: Save A Lot sells 32 stores as part of wholesale business shift 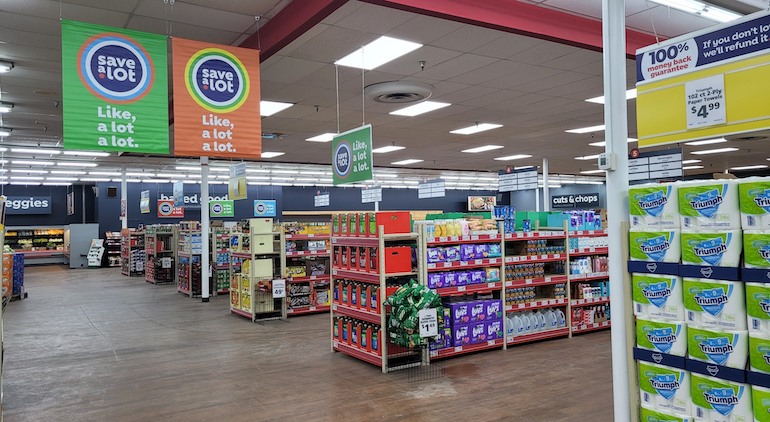 In September, J. Word Enterprises opened a new Save A Lot store in the Antioch neighborhood of Nashville, following its acquisition of four Save A Lots in October 2020.

In July, Save A Lot also announced plans to remodel a third of its store base in 2021 and upgrade the rest of the stores by 2024. Currently, the company has about 1,000 stores in 32 states.

“We are delighted that Yellow Banana is growing its Save A Lot store count,” Tim Schroder, chief sales and marketing officer at Save A Lot, said in a statement. “Their clear commitment to connecting the business to the local community and appetite for growing the business will ensure Save A Lot continues to serve customers for years to come.”

Yellow Banana noted that its acquisition of the six stores in Jacksonville and Dallas will enable those locations to remain open. The company said it plans to retain the Save A Lot banner and discount format as well as all of the stores’ nearly 100 associates, upholding their current wages, health insurance and retirement benefits.

“The Yellow Banana team has great confidence in the Save A Lot brand and format, and we look forward to delivering affordable, high-quality food to working families in the important Southern cities of Dallas and Jacksonville,” Yellow Banana CEO Joseph Canfield commented.

As with the acquired Cleveland, Chicago and Milwaukee locations, Yellow Banana said it aims to expand the Jacksonville and Dallas stores’ selection of local and regional products and hire from local communities. All of the stores also will undergo remodels in 2022 to incorporate Save A Lot’s latest branding and format, including new decor, upgraded flooring and lighting, and updated produce and meat cases.

“We are excited to deepen our strong relationship with Save A Lot and to expand our mission of tackling food deserts across the United States, through this extension of Yellow Banana’s operations into the promising Texas and Florida markets,” stated Yellow Banana President Ademola Adewale-Sadik, who co-founded Cleveland-based 127 Wall Holdings with Walker Brumskine, Michael Nance and veteran retail operator Canfield.

In early October, news emerged that Save A Lot had quietly appointed Craig Herkert as interim chief executive officer with the departure of CEO Kenneth McGrath, who rejoined Lidl. Save A Lot disclosed Herkert’s appointment in reporting the sale of 17 metropolitan Philadelphia stores to independent grocer and current Save A Lot operator Leevers Supermarkets Inc., a previously unannounced deal.

Franktown, Colo.-based Leevers said it has completed a seven-month, $2 million remodel project for 16 of the stores, which were purchased in March. The company now owns 17 of the 35 Save A Lot stores operating in the greater Philadelphia area, including 13 locations within the city limits. Leevers also operates 17 Save A Lots in Colorado.

In September, J. Word Enterprises LLC, an affiliate of real estate investment firm J.  Word Properties, opened a brand-new 23,000-square-foot Save A Lot store in the Antioch neighborhood of Nashville, Tenn. That followed J. Word’s acquisition of four Save A Lot locations in Nashville in October 2020.