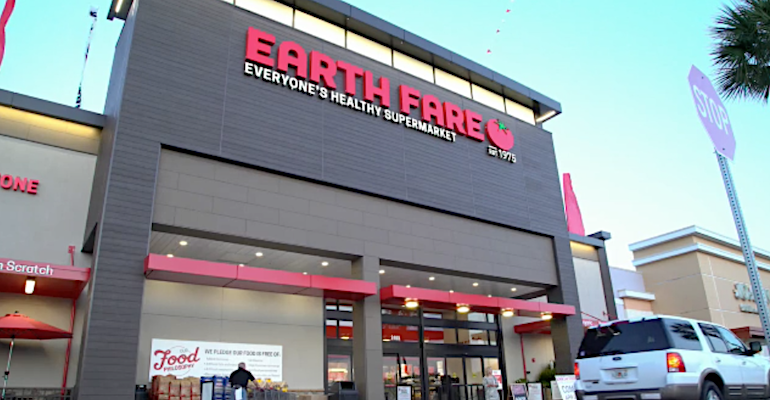 Earth Fare
Earth Fare had 50 stores in 10 states when it filed for Chapter 11 bankruptcy in February.
News>Retail & Financial

A&G Real Estate Partners has wrapped up the sale of 10 Earth Fare store leases to Winn-Dixie, Whole Foods Market, Aldi and an investor group including one of Earth Fare’s founders.

Melville, N.Y.-based A&G said yesterday it also negotiated lease termination agreements for nine other locations of Earth Fare. In early February, the Asheville, N.C.-based natural and organic grocer filed for Chapter 11 bankruptcy protection and announced plans to close all of its stores and go out of business.

The final leasehold sale to winning bidders closed on April 10, with the sites ranging in size from 21,000 square feet to 38,000 square feet, according to A&G. The investor group also acquired Earth Fare’s trade name and other intellectual property.

Combined, A&G reported, the court-approved transactions contributed more than $6 million to the estate of Earth Fare, which filed for Chapter 11 on Feb. 4 in the U.S. Bankruptcy Court in Wilmington, Del.

“We completed this process in less than 60 days amid one of the biggest public health and economic crises in U.S. history,” A&G Senior Managing Director Joseph McKeska, a 28-year veteran of the retail grocery sector, said in a statement. “Leases for the remaining 38 locations we were handling were rejected and returned to the landlords in late March, freeing the estate from having to pay April rents on those sites. Considering all of the obstacles faced during this unusually difficult period, we were pleased with the results of this fast-track sale.”

A&G and New York-based Hilco Streambank announced in February that they were retained by Earth Fare to sell off its stores and leases as well as its intellectual property, with A&G handling the former and Hilco the latter. A&G said it worked under the direction of Earth Fare’s chief restructuring officer, Chuck Goad of FTI Consulting, after being retained days before the bankruptcy filing in February.

Bids for the leases were due on March 16, which resulted in a successful sale hearing before the court on March 24, A&G said. All of the lease sales were finalized before the end of March, save for the two sites acquired by Whole Foods that closed last week.

“In an extraordinarily challenging environment for retail real estate, the results of this process were far better than we expected,” Goad stated.

News of the sale of the pending sale of the Earth Fare stores emerged last month, as did reports of the formation of an investor group to acquire and operate some of the chain’s stores on the block. Published reports said the group is led by President Bethany Turon, formerly senior vice president of human resources at Earth Fare, along with Earth Fare co-founder Randy Talley and ex-Earth Fare CEO Mike Cianciarulo.

Besides the Athens, Asheville and Roanoke stores, the investor group reportedly has added or plans to acquire Earth Fare locations in Summerville and Columbia, S.C., and in Boone, N.C.