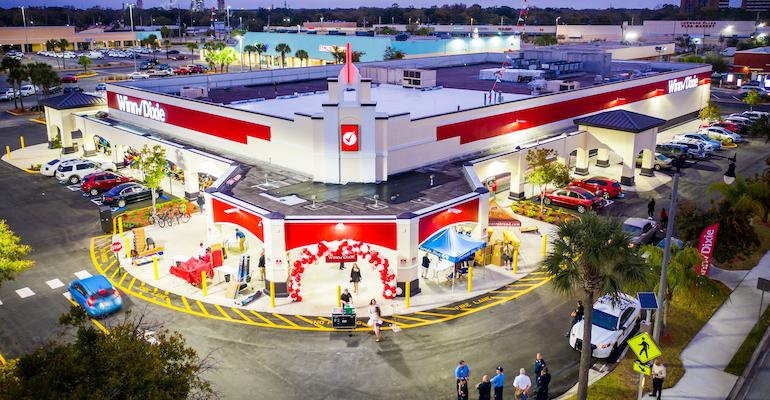 Southeastern Grocers
Winn-Dixie is on track to open eight new stores this year, including a location opened in February in Jacksonville's Brentwood section.
News>Retail & Financial

Southeastern Grocers plans to open eight acquired stores under the Winn-Dixie banner in Florida before the end of this year.

Jacksonville, Fla.-based Southeastern Grocers said Wednesday that all of the new locations are slated to have grand opening dates this year and will be introduced to the community with an opening event for customers.

All of the new stores came from lease purchases during the bankruptcy proceedings of Lucky’s Market and Earth Fare, with Southeastern Grocers buying four locations from each chain. The stores acquired from Lucky’s are in Fort Myers, Gainesville, Lake Mary and Melbourne, while the former Earth Fare stores are located in Boynton Beach, Jacksonville, Lakewood Ranch and Viera.

Lucky’s announced the sale of the four leases for $2.4 million to Southeastern Grocers in late March. No dollar amount was disclosed for the acquisition of the Earth Fare leases, which was finalized in mid-April.

“We are committed to supporting, enriching and growing the communities we serve. Winn-Dixie is deeply rooted in Florida, and we are proud to expand our footprint and enhance our presence throughout the state,” Southeastern Grocers President and CEO Anthony Hucker said in a statement. “In addition to our new store that we opened earlier this year, we look forward to introducing eight more new appealing stores with fresh, quality products at the right price to deliver a shopping experience our associates, customers and communities can always count on.”

Each of the acquired stores will be remodeled to provide a wide selection of products as well as additional jobs and opportunities for the communities they serve, according to Southeastern Grocers. The company said it’s offering jobs to Lucky’s and Earth Fare workers displaced by the store acquisitions.

Including the acquired stores, Winn-Dixie is on track to open nine new locations this year. In February, the chain opened a new store in Jacksonville’s Brentwood community in response to requests from the city and the community, which expressed concerns that the impending closure of a Publix store would create a food desert.