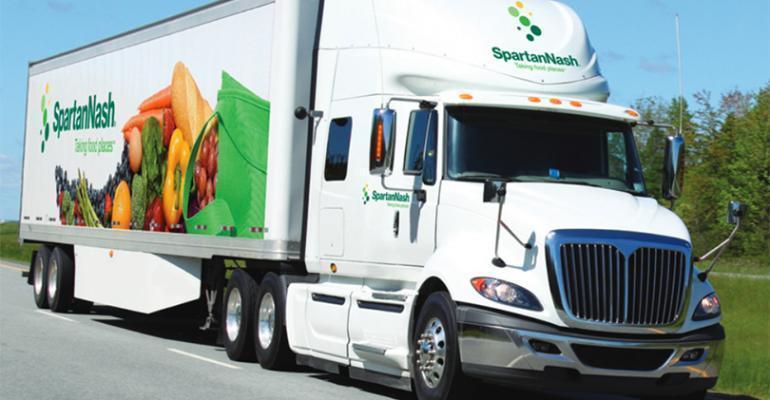 SpartanNash
The aggregate shares offered through the warrant to Amazon represent a total investment of $96.4 million and about 15% of SpartanNash’s shares outstanding.
News>Retail & Financial

SpartanNash has issued a stock warrant to an Amazon.com Inc. affiliate that would enable the e-commerce giant to become one of the grocery distributor’s largest institutional shareholders.

In an 8-K filing this week with the Securities and Exchange Commission, SpartanNash said it issued a warrant to Amazon subsidiary NV Investment Holdings LLC that would enable it to buy up to 5,437,272 shares of common stock at about $17.7257 per share, or a $96.4 million total investment, through Oct. 7, 2027.

The aggregate number of shares offered through the warrant represent about 15% of SpartanNash’s current 35,833,252 shares outstanding. The warrant vested with 1,087,455 shares upon issuance, according to the Oct. 7 SEC filing.

News of the warrant hoisted SpartanNash’s share price on Friday. The company’s common stock opened at $19.20 and jumped to around $23 as of noon trading.

SpartanNash said in Wednesday’s SEC filing that the warrant for the Amazon affiliate comes “in connection with its entry into a commercial agreement with Amazon.” The Grand Rapids, Mich.-based food wholesaler has had Amazon as a customer for at least four years.

In May 2016, then-SpartanNash Chief Operating Officer and former CEO David Staples said in an earnings call that the company had recently added Amazon as an account. He said the relationship encompassed supplying dry and chilled dry and chilled groceries to Amazon distribution centers, including support of the Seattle-based e-tailer’s Amazon Prime Now grocery delivery program and emerging AmazonFresh perishables delivery service.

“We’re excited about our relationship with Amazon,” Staples said at the time. “While still a relatively new account, the volume has been greater than we expected, and we believe that it has significant growth potential.”

In October 2019, Amazon made the AmazonFresh delivery a free service for members of its Prime customer benefits program on orders of $35 or more. The move essentially made free grocery delivery part of the Prime benefits package, since Amazon’s Prime Now and Prime Pantry programs already offered free delivery on orders of at least $35. Prime Now also includes delivery and pickup from Whole Foods Market stores in select areas. Groceries ordered through AmazonFresh, currently available in about 20 major markets, are delivered from Amazon fulfillment centers. Groceries ordered through AmazonFresh are delivered from Amazon fulfillment centers.

Amazon has since brought that banner to a new grocery store concept, called Amazon Fresh. The first store opened this past August in Woodland Hills, Calif., and Amazon has disclosed six other upcoming Amazon Fresh store locations, including North Hollywood, Irvine and Northridge, Calif., as well as Naperville, Oak Lawn and Schaumburg, Ill.