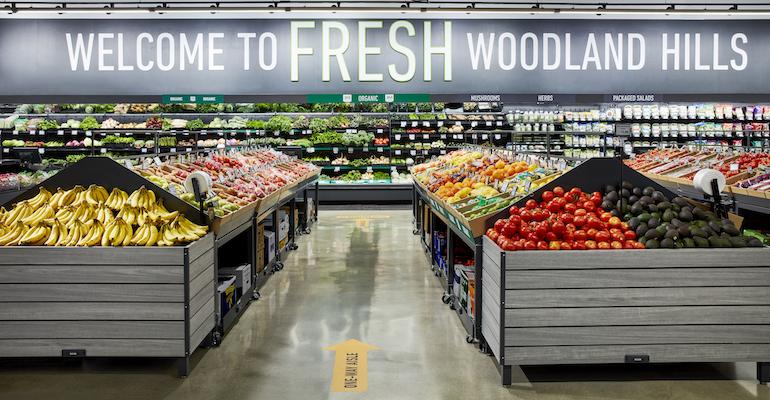 Amazon
The 35,000-square-foot Amazon Fresh store in Woodland Hills isn’t slated to open to the general public for several weeks, but Amazon is emailing invitations to thousands of local consumers to try the store this week.
News>Retail & Financial

Located at 6245 Topanga Canyon Blvd., the 35,000-square-foot store isn’t slated to open widely to the general public for several weeks, according to Jeff Helbling, vice president of Amazon Fresh stores. But starting today, Amazon is emailing invitations to thousands of local consumers to be the first to shop Amazon Fresh this week, he said. Hours of operation will be 7 a.m. to 10 p.m. daily. 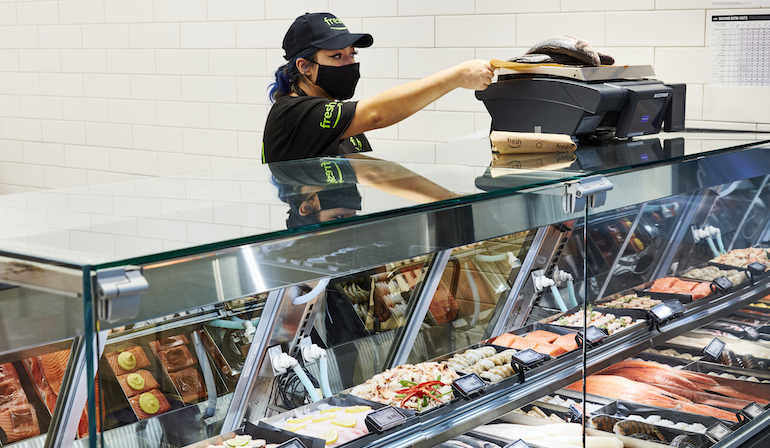 “We’re announcing our first Amazon Fresh grocery store. It’s a new grocery store designed to offer a seamless shopping experience whether customers are shopping in-store or online,” Helbling said in an interview. “With this new store, we've taken our decades of operations experience at Amazon to deliver consistently low prices for everyone and free same-day grocery delivery for Prime members.”

“This is the first store where customers will get to use our recently announced Dash Cart. We’re very excited for customers to try it out,” Helbling said, adding that he was a beta-tester for the device. “It’s a smart cart that helps make your grocery shop quicker by enabling you to skip the checkout line.”

A newly built supermarket, the Woodland Hills Amazon Fresh offers an extensive selection of fresh produce, meat and seafood as well as an array of baked goods and prepared foods made fresh daily by the store’s culinary team. Customers also will find a wide assortment of national brands and private labels, including brands from Amazon and its Whole Foods Market subsidiary.

“In terms of selection, you will see all of the items you would expect to see in any full-service grocery store,” Helbling said.

News about a new Amazon grocery store concept separate from Whole Foods emerged in the fall of 2019, when The Wall Street Journal reported that Amazon was planning a new chain of stores starting in Los Angeles, Chicago and Philadelphia. 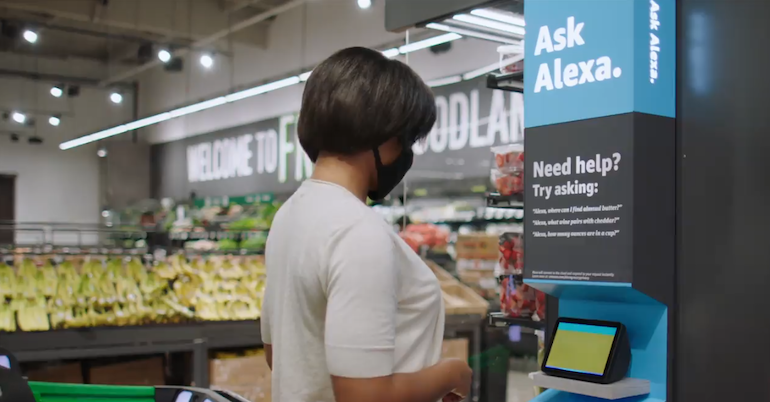 Amazon Echo Show devices are deployed throughout the store so shoppers can ask the Alexa virtual assistant for help.

The Journal said at the time that the Seattle-based e-tailer had signed more than a dozen leases in the Los Angeles area, including Woodland Hills, that would be part of more stores slated to open nationwide, including potential sites in New York, New Jersey and Connecticut.

Amazon later confirmed plans only for the Woodland Hills location — though not specifying a store banner — as speculation continued. Industry buzz was rekindled in late February when Amazon opened a neighborhood store concept called Amazon Go Grocery. The 10,400-square-foot location in Seattle features a curated grocery selection and the “Just Walk Out” cashierless technology used in the more than two dozen Amazon Go convenience stores in Seattle, New York, Chicago and San Francisco.

More recently, in an Aug. 6 posting, food/tech blogger Matt Newberg of HNGRY said public records indicated that Amazon planned to open at least 15 retail grocery stores under the Amazon Fresh brand in Southern California, New Jersey, Illinois and Pennsylvania that would create “a digitally integrated experience that is unprecedented for the industry.” 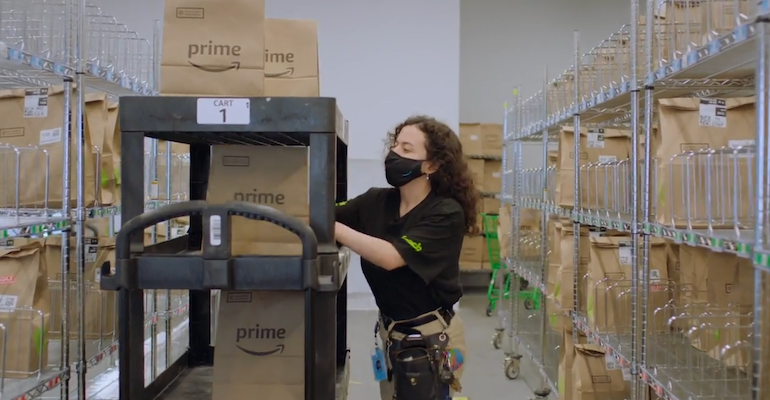 Same-day grocery delivery and pickup are offered directly from the Amazon Fresh store, and deliveries are free for Prime members.

Helbling said Amazon Fresh store locations already disclosed include Irvine and Northridge, Calif. — which along with the Woodland Hills store have fulfilled online orders during the COVID-19 pandemic — and a North Hollywood location that will be “opening soon.” A not-yet-opened Amazon Fresh store in Naperville, Ill., also is filling delivery orders, and two more Chicago-area locations in Oak Lawn and Schaumburg are upcoming, he added.

Inside the Woodland Hills Amazon Fresh, shoppers will see “consistently low prices” across fresh foods and and the grocery aisles for both national and private labels, according to Helbling.

“Our Fresh brand offers great value on meat, seafood and bakery items,” he said. For example, Fresh-brand natural whole chicken with no added hormones retails for 99 cents/lb., a 3 lbs. bag of onions costs $1.69 and 10-count box of Quaker Oatmeal runs $2.50 for all flavors.

“Customers generally expect low prices and great selection from Amazon, and we think they’ll also be surprised and delighted by the quality of our prepared foods,” said Helbling. “Our culinary team offers a wide range of customer favorites made in store every day, from fresh-baked bread and made-to-order pizzas to rotisserie and fried chicken and hot sandwiches.” There’s also a full-service deli department offering grab-and-go hot and cold food options. 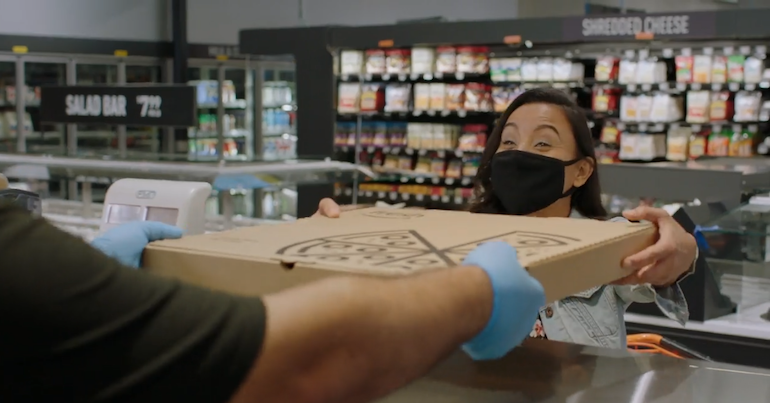 Made-to-order pizza is among the prepared food options at the Amazon Fresh in Woodland Hills.

Brands that Amazon Fresh patrons will find across the store include national names like Coca-Cola and Kraft Mac & Cheese; local brands such as Rockenwagner Bakery and Groundworks Coffee; regional favorites like Duke’s mayonnaise (South Carolina) and Ellenos yogurt (Seattle); the 365 by Whole Foods Market organic brand; and new Amazon exclusive brands such as Cursive. “Cursive is a new exclusive wine brand. We offer a selection of reds and whites at a terrific value,” Helbling said.

Customers, too, can earn 5% back at Amazon Fresh by using the Amazon Prime Rewards Visa Signature Card or Amazon Prime Store Card at checkout.

On the e-commerce side, same-day grocery delivery and pickup are offered directly from the Amazon Fresh store. Customers can pick up their orders by at the store’s service counter or by parking in a designated pickup spot. Published reports earlier this year said the Woodland Hills Amazon Fresh housed a Dematic-automated micro-fulfillment center on-site to fill online orders, but Helbling said that’s not the case.

“We don’t have the Dematic solution that you mentioned,” he said in the interview. “Right now, fulfillment is done manually, through a manual pick.” 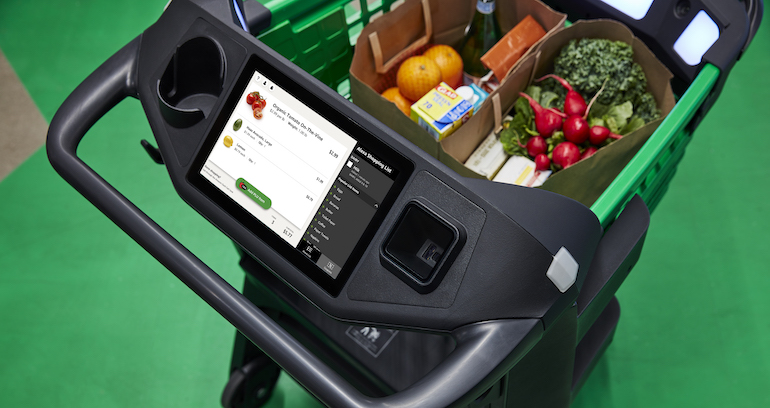 The Amazon Fresh store also serves as a site for Amazon.com order pickup and free “package-less” product returns, “which just means that customers don’t need a box or shipping label to return an item,” Helbling explained. “They just bring the item to the counter, and we’ll package it up and ship it back for free.”

Although conventional shopping carts are provided, a central part of the Amazon Fresh store’s convenience offering is the Amazon Dash Cart. The “intelligent” cart uses computer vision algorithms and sensor fusion to identify items placed in the cart’s basket. Customers sign into their Amazon account by scanning the Amazon app QR code using the reader on the cart’s handle, place bags in the basket and then begin shopping. The cart beeps to signify that a product’s barcode has been read and recorded. A running tally of purchases is displayed on the cart’s screen. When finished shopping, customers exit through the Dash Cart lane to automatically complete their payment.

“Essentially, you sign in to your Amazon app, you shop and you walk out,” Helbling said.

When customers enter the store, they also can access their Alexa shopping list through the Amazon app or Dash Cart, allowing them to quickly navigate the aisles to find the products they want and check them off as they shop. Amazon Echo Show devices also are deployed throughout the store so shoppers can ask the Alexa virtual assistant for assistance, such as by saying, “Alexa, where can I find the hot sauce?”

“We’re really excited to introduce the Amazon Fresh grocery store to customers and to open our doors to our first set of customers in Woodland Hills this week,” Helbling said.

COVID-19 safety measures at the Woodland Hills Amazon Fresh reflect learnings from Whole Foods, he added. They include daily temperature checks for all employees, face coverings for all employees and customers entering the store, free disposable masks for shoppers who need one, and a 50% customer capacity limit to promote social distancing, among other efforts.